Album Club, which is free and open to all, functions like an informal book club, where participants join together to listen to and discuss classic albums. The program is hosted by OSU director of popular music and performing arts Bob Santelli.

“Constant advances in technology and the way we consume music on mobile devices through apps and streaming services might make you think the record album as an art form is extinct, but that’s not true,” Santelli said. “Album Club brings together students and seniors and people of ages in between, because music is a common language and these classic rock and pop albums sustain their relevance and popularity across generations.”

“Rumours” is Fleetwood Mac’s 11th studio album and was released in February 1977. An instant commercial success, the album sold over 10 million copies worldwide within a month of its release. It won album of the year at the 1978 Grammy Awards and has sold more than 45 million copies worldwide, making it one of the best-selling albums of all time.

Album Club is free but registration is required. To receive your link to participate, go to: https://beav.es/ov8. 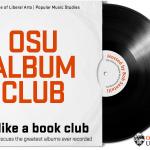