With this graduating class, Oregon State will now have more than 200,000 alumni living and working in all 50 states and more than 125 countries.

Gates will open at 9 a.m. for commencement, which is free, open to the public and held rain or shine. Tickets are not required.

The 7,202 graduating students will receive 7,492 degrees. (There will be 274 students receiving two degrees and eight who will receive three degrees.) They will add to the ranks of Oregon State alumni, which have earned 257,695 degrees over the university’s history.

Approximately 4,200 graduating students are expected to participate in commencement. Oregon State is one of the nation’s very few universities of its size to hand out actual diplomas to students as they graduate. The ceremony will be broadcast in HD live on OPB PLUS and live-streamed at http://commencement.oregonstate.edu/live-stream.

The commencement address will be given by Jane Lubchenco, a world-renowned leader in environmental research, former administrator of the National Oceanic and Atmospheric Administration, and an Oregon State University marine ecologist. She will receive an honorary doctorate degree in ocean, earth and atmospheric sciences.

Lubchenco is a distinguished university professor at Oregon State and has been instrumental as an advisor to Oregon State President Ed Ray as the university has undertaken its marine studies initiative.

Lubchenco is one of the world’s most highly cited ecologists with expertise in the ocean, climate change and interactions between the environment and human well-being. She served as an undersecretary of commerce for oceans and atmosphere within the Obama administration and later as the State Department’s first science envoy for the ocean.

Some facts and figures about OSU’s class of 2019: 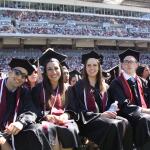 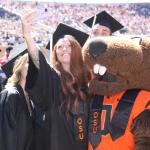