PORTLAND, Ore. – Research by the Oregon State University College of Engineering will help the Port of Portland save as much as $50 million on work to ensure a Portland International Airport runway can survive an expected magnitude 8.0 to 9.0 Cascadia subduction zone earthquake.

Armin Stuedlein led the project, which involved three days of test detonations at the airport in 40- and 90-foot-deep blast casings. By studying the series of controlled blasts, researchers could determine how the sand and silt soils underlying the airport would respond to a “megathrust earthquake” and what ground improvements are needed to prevent liquefaction and keep the runway intact.

“The port needs to change the composition of the soils so they don’t turn into viscous liquids,” said Stuedlein, professor of civil and construction engineering. “It’s a very large area, and every part of the area that they don’t need to improve, because they understand the soils, will save millions of dollars.”

The Port of Portland is a member of the Cascadia Lifelines Program, or CLiP, which OSU formed to conduct research to help Oregon’s largest infrastructure operators – such as the port, NW Natural, Portland General Electric, the Bonneville Power Administration and the Oregon Department of Transportation – mitigate earthquake damage in the most effective and cost-efficient ways.

“We put in $350,000 for Armin’s work to save $50 million or right around there,” said Tom Wharton, project engineer for the Port of Portland. “It was a no-brainer.”

CLiP Director and engineering Professor Michael Olsen describes the program as a “powerful forum” that brings together lifeline service providers to address specific challenges associated with Cascadia subduction zone earthquakes. Cascadia quakes are fundamentally different than the ones California experiences, and also longer – 90 seconds or more, compared to 10 to 30 seconds.

The airport project grew out of a 2016 resilience workshop CLiP hosted for its member agencies, which also include the Eugene Water and Electric Board, Portland Water Bureau and the Tualatin Valley Water District. At the workshop Stuedlein suggested blast testing to “excite the soils” to better understand how the airport ground would behave during a devastating quake.

“When a big Cascadia earthquake hits, the Port of Portland is really the only possible venue to fly in supplies,” Stuedlein said. “Having a runway serviceable is a key requirement for the whole Northwest; we expect I-5 to be shut down and bridges on the Columbia and Willamette to be out of service. Much of Oregon’s infrastructure was built long before seismic risk was fully understood.”

Situated on 700 acres in northeast Portland, Portland International Airport has two main runways, each in a northwest-southeast alignment. One is north of the terminal, along the Columbia River, and the other is south of the terminal. The 11,000-foot south runway, surfaced in concrete and more than 1,000 feet longer than the asphalt-surfaced north runway, is the one the Port of Portland aims to keep open after a huge quake.

“Both runways are close to the river and susceptible to earthquake-induced liquefaction,” Stuedlein said. “There’s 100 feet of liquefiable soil beneath the runways, and liquefaction is not as well understood at depths like that.”

With financial support from the Cascadia Lifelines Project and National Science Foundation as well as the Port of Portland, onsite work began in March 2018. Blasting, which followed the drilling of boreholes and the installation of instruments, occurred on three consecutive days in October 2018.

“We just took the energy to the soil and created seismic energy similar to an earthquake,” Stuedlein said. “Before our work, no one had observed what we had observed the way we observed it. And we showed that trends of liquefaction that had only been observed in the lab held true in the field – so we demonstrated that our experimental technique is valid for getting information that’s highly useful in understanding quake risk.”

The reason no one had tried the technique before, he said, is because explosions cause what are referred to as P waves, thought to be unrepresentative of earthquakes, which are dominated by S waves. In a quake, P waves, also known as compressional waves, travel much faster than the S waves that follow, and each type of wave causes the ground to oscillate in a different direction.

“We showed that the P waves the explosions generated didn’t matter at all and that the secondary waves we generated were a lot closer to quake motion than had been previously thought,” Stuedlein said. “This is as good an analogue for quakes as possible.”

There are a couple of methods for ground improvement, Stuedlein said. One is called vibro-compaction, which densifies the soil, and the other is deep soil mixing, which involves injecting water and a cement slurry into the ground through heavy equipment resembling a giant drill. The Port of Portland is planning to employ deep soil mixing.

“You essentially solidify the ground by turning sand into sandstone to raise the strength of the material,” he said.

Wharton, the Port of Portland project engineer, says the port has completed 30% of the design work needed for the ground improvement. When the design is complete, or close to it, the port will pursue federal funding, and it hopes to begin deep soil mixing – on a 6,000-foot stretch at the east end of the south runway – within 10 years.

“It’s about $10 million for every foot of depth,” he said. “Without Armin’s work to help us understand the soils, we’d have to do 100 feet deep instead of 50. The National Institute of Building Sciences did a return of investment study on the economic value of a resilient runway versus a non-resilient runway and found that there was a 50 to 1 return on mitigation.”

Stuedlein’s team has published a series of papers on the airport work, including one this month in the Journal of Geotechnical and Geoenvironmental Engineering.

“We’ve shown that blasting experiments can be used to determine fundamental dynamic properties of any kind of soil and are particularly well-suited for soils that are not easily sampled,” he said. “And they can be conducted at any depth, opening up a new avenue for learning vital dynamic characteristics of geological materials.” 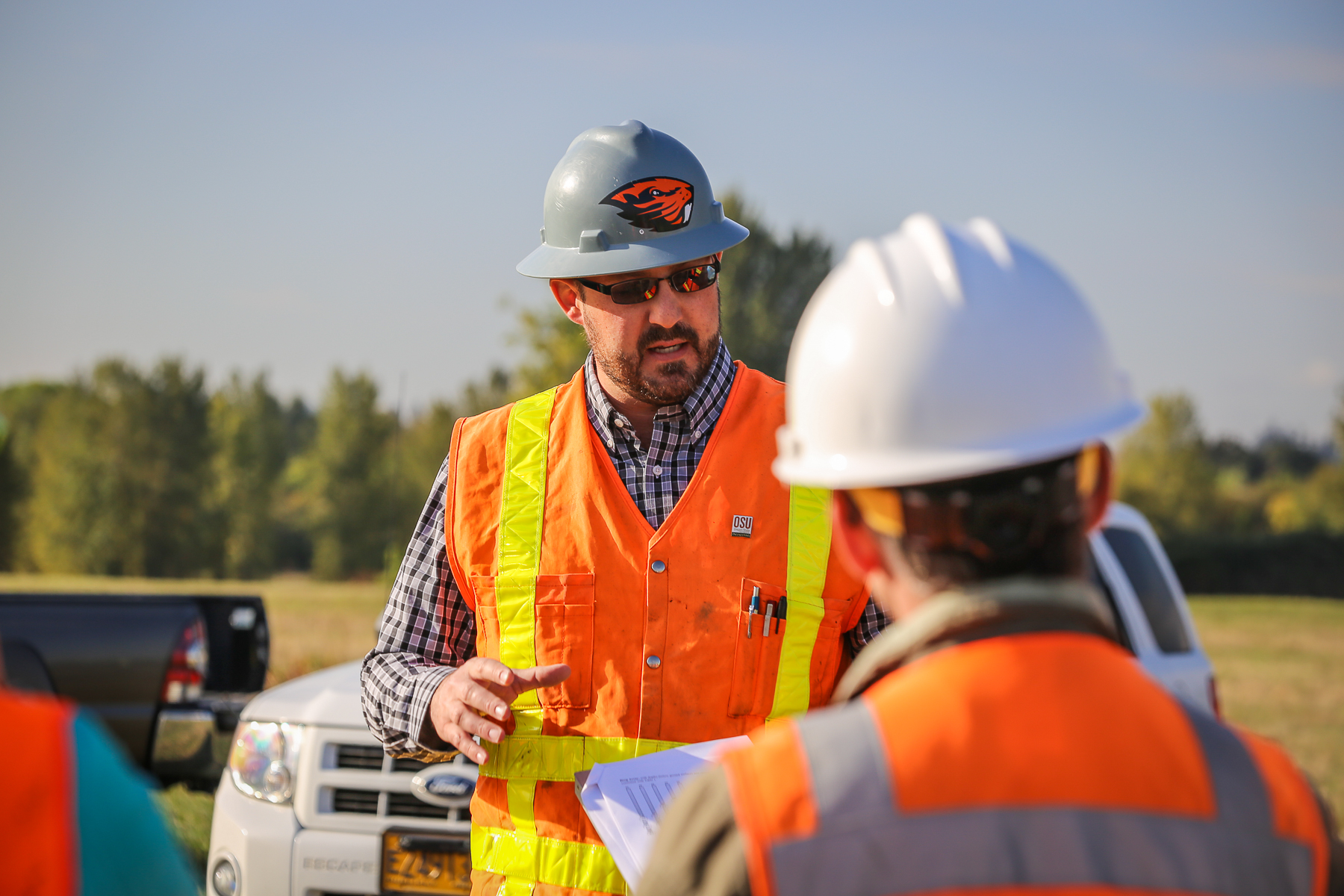