“During the campaign, Joe Biden pledged to get science back into government and to allow science to guide government actions,” said Lubchenco, who worked with Biden while serving as NOAA director in the Obama administration. “As a longtime member of the scientific community and a former government official, I have some ideas for how to do that.”

Lubchenco, who forged a relationship with the then-vice president during on-one-one discussions during the BP Deepwater Horizon oil spill in 2010, offers four overarching recommendations:

“When we flew aboard Air Force Two to the Gulf of Mexico during the Deepwater Horizon disaster and in the car after landing, Joe Biden peppered me with a wide range of questions that made it clear how much respect he has for science and how able he is to lean on scientists’ help in understanding complicated issues,” Lubchenco said. “He also has tremendous capacity for integrating science into his messaging in ways that make science useful and relevant to people’s lives.”

Lubchenco said Biden’s first job as president is to make clear that his administration has the same respect for scientists that he does personally.

“Nominating a ‘Science Team’ that includes the president’s science advisor immediately after cabinet nominations makes a clear statement that science is back and is a priority,” she said. “Moreover, elevating the science advisor to cabinet-level status would underscore the relevance of science across the executive branch.

“We also need new, transparent mechanisms to make sure science is at the table every time a key decision needs to be made,” Lubchenco said. “Every major special team the White House creates needs a lead scientist, and a visible one. And every time a major decision or action is announced, it needs to include a summary of the applicable science.”

Lubchenco, who served as an inaugural member of President Barack Obama’s Science Team and as the first U.S. Science Envoy for the Ocean, said that as president, Biden should issue powerful scientific integrity guidelines that forbid anyone in the executive branch from “cherry-picking, manipulating, suppressing or distorting scientific information.”

“Agency scientists have to be free to talk to the press about their findings without a gatekeeper or politically constrained talking points,” she said. “Scientific integrity policies are the backbone of a healthy scientific enterprise in the government. Over the last four years, many scientists throughout the federal government were demoralized and/or left. We need to reconstitute our scientific capacity with a diverse group of early-career scientists who will benefit the nation for decades to come. The more that scientists look like the rest of America, the more they will be trusted.”

Lubchenco said holistic approaches – including thinking across complex systems and integrating social and economic dimensions – are needed to tackle current challenges including climate change. She noted that President Obama created a National Ocean Council to harness the power of the 26 agencies and offices connected to ocean issues.

“Biden should avoid dealing with issues in silos and instead seek holistic solutions across agencies and issues,” she noted. “For example, he can listen to the scientific information that identifies powerful opportunities for healthy ocean ecosystems to help address climate change, biodiversity, economies, health, coastal resilience and equity. And he should empower a new National Ocean Council and policy to harness this power of a healthy ocean.”

The ocean, just like science, is not a partisan topic, she emphasized.

“Americans understand and appreciate that science needs to be free from political interference to have maximum impact on their well-being,” Lubchenco said. “They get that things like hurricane forecasts need to be based on science and they want to know what the experts think, unencumbered by partisan pressure.”

Science must be one of the factors that decision makers across the government spectrum regularly and necessarily consider, she said.

“The more opportunities we can all provide for people to participate in science, the better,” Lubchenco said. “Those opportunities help to demystify science, make it accessible and drive home that it’s not political. The messages and actions that come from the top matter a lot, and I’m encouraging our new president to embrace and use science, even when it might not be convenient. The nation and world will be much better off if he does so.” 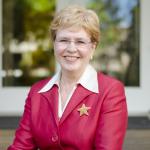