CORVALLIS, Ore. – Jesse Garcia likes kale – he really likes kale. So, when his crop got infested with cabbage worms, he came up with a novel approach to pest control.

Garcia, an Oregon State University Extension Service Master Gardener, moved to the Willamette Valley in 2016 and planted a substantial vegetable garden two years later. Late that summer, he noticed cabbage white butterflies infesting his kale, a problem similar to what he’d found in Oklahoma, where he started growing the so-called “super” food in 2013. In that garden, he pulled up his first crop in frustration because of an infestation. In Oregon, he continues to fight the worms, which are the larval stage of the cabbage white butterfly (Pieris rapae).

Before becoming a Master Gardener, Garcia didn’t know about those methods so he tried his own: In fall, he stripped the infested foliage off the cool-weather vegetable and left 6 to 8 inches of bare stalk.

“I basically stumbled on this idea on my own in 2015 while gardening in Oklahoma,” Garcia said. “It was a backyard experiment. The objective is to get an early crop of kale for spring and control the cabbage worm. I decided to give it a try here in Oregon this past year. Well, it so happens it worked here, too. I was tickled to death that I actually was able to grow a new crop of kale this way.”

The curly and dinosaur kale Garcia planted in May 2019 did well in his raised beds until fall when the cabbage worms came on strong. In November, he cut off all the leaves of the curled kale. By last February, he was harvesting a clean crop.

“The stalks stayed alive over the winter,” Garcia said. “By mid-January, they were growing new foliage. Now I have beautiful 22-inch plants. The kale is very good.”

Garcia plans to try row covers this year, but won’t give up on his new technique for an early kale crop.

Though Garcia loves kale, his wife disagrees. Most of his friends feel the same way. But he enjoys adding kale to salads and making them into chips (Tip: Cook them at 300 degrees for 25 minutes, rotating midway through, and let them sit on the baking sheet for three minutes.) 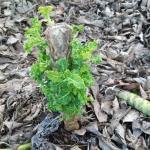