OSU first in region, third in nation in Department of Energy cybersecurity competition

CORVALLIS, Ore. – A student team from the Oregon State University College of Engineering placed third nationally out of 70 teams in the Department of Energy’s CyberForce Competition, a virtual challenge that involves protecting the information technology of the nation’s energy infrastructure.

In addition, the OSU Security Club was one of seven regional winners in the competition, held last weekend at Department of Energy labs around the country.

“The College of Engineering has deep research expertise in cybersecurity, and the success of these students is a direct reflection on the world-class faculty they learn from and work with,” said Scott Ashford, dean and Kearney Professor of Engineering for the college.

In the Cyberforce Competition, teams are tasked with safeguarding existing systems and deploying new ones in order to secure a variety of business applications, explained OSU team captain Zander Work.

“Some of the traditional systems we had to secure were web servers, database servers, centralized authentication systems and file servers,” said Work, president of the Security Club. “We also had a simulated oil pipeline that needed to be secured using industry standard protocols such as Modbus and DNP3 that have a very different set of requirements when it comes to securing. The industrial control systems behind the simulated pipeline also had a model high-performance computer that we needed to learn about and secure as well.”

Teams were scored on their ability to design a security architecture, document the architecture for an IT administration team, and make all systems functional for end users while detecting, blocking and generating incident reports about cyberattacks.

Work, Rogers and Warrick all work in the Oregon Research & Teaching Security Operations Center at OSU. Whitehead is part of OSU’s Open Source Lab, Rahal-Arabi works in IT with the College of Forestry, and Luu designs infrastructure and web applications for large financial data analyses at the College of Business; Luu is also a computer science teaching assistant.

“We have experience in security operations and working with a lot of the tools we used in the competition,” Work said. “When putting together the team, I made sure to select people with the right skill sets and experience to ensure we could meet our goals, and also people who would work well together. Our team dynamic was great, which definitely helped us power through some very long nights preparing for the competition and making sure we could put our best foot forward and strive for the best result possible.”

For a month leading up to the competition, the team identified vulnerabilities in existing systems; designed, configured and deployed new systems; and built functionality for end users.

“On the day of the competition we had to maintain service availability, monitor the network for intrusion attempts and respond to various tasks that the tournament organizers had designed to keep the teams on their toes,” Work said. “I love participating in the competition because it allows me to put my skills to the test in a competitive environment where you have access to amazing resources and different technologies than you normally would.”

Central Florida was the overall winner of CyberForce, followed by Kansas State and then Oregon State. At ninth, the University of California, Berkeley, was the only other Pacific 12 Conference school in the top 10. 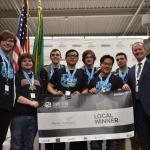