NEWPORT, Ore. – Oregon State University’s new marine studies building at its Hatfield Marine Science Center will not only increase the region’s marine science education and research capacity, it will use state-of-the-art architectural and engineering techniques to serve as one of the first “vertical evacuation” tsunami sites in the United States.

On Wednesday, OSU leaders unveiled plans for the $50 million-plus building, which will be located on the university’s Newport campus adjacent to Yaquina Bay in Newport. The 72,000-square-foot building will have a three-story academic and research core, connected to a two-story wing that includes community space, an auditorium, an innovation laboratory and other facilities.

A ramp will lead from ground level to the top of the auditorium, and from there to the roof of the three-story structure. The roof of the building will be at a height of 47 feet and is designed to serve as a vertical evacuation site for more than 900 people.

“This new building will not only meet our programming goals for the Marine Studies Initiative, coastal and oceanic research, and public outreach, but it will include added safety options for the Hatfield campus through its vertical evacuation,” said Bob Cowen, director of the Hatfield Marine Science Center.

“We have designed academic spaces that will enhance collaboration among students as a teaching tool, as well as drawing on the diversity of disciplines that the Marine Studies Initiative will represent. There also will be an innovation lab and studio that will enable students, faculty researchers and even entrepreneurs to design, build, test and market new technologies, as well as promote creative artistic projects.”

“The auditorium will not only enhance OSU’s academic mission, but also serve the Hatfield Marine Science Center’s community role.”

Architects for the project are from Yost Grube Hall in Portland, with Andersen Construction of Portland as general contractor.

Groundbreaking for the new facility is planned for spring of 2018, Cowen said. The academic and research center is targeted for completion by fall of 2019.

The facility will be a focal point for the university’s Marine Studies Initiative, which aims to increase the region’s capacity for marine-related education, research and outreach and engagement. OSU plans to have up to 500 students annually studying and doing research at the Hatfield campus by 2025. The new building will include classroom space and offices for faculty and graduate students.

“Major areas for academic development include opportunities that can increase student success, such as access to internships and other hands-on experiential education and interdisciplinary programs training students in the human dimensions of coastal and ocean issues,” Barth said. “We’re excited to have the new building at the Hatfield Marine Science Center serve as a focal point for the Marine Studies Initiative in Newport.”

In addition to housing Marine Studies Initiative programs, the new building will provide headquarters for OSU’s nationally recognized Marine Mammal Institute and its marine genetics and genomics programs. The move by those programs into the new building will free up space for expanding Hatfield’s seawater laboratories in existing buildings, Cowen said.

Oregon State also announced that it has purchased a site of more than five acres near Oregon Coast Community College, where it will begin construction of a residence hall that will house up to 360 students. The site is south of Hatfield Marine Science Center and out of the tsunami inundation zone. Construction will run concurrently with the Marine Studies Building, officials say, and should be open by fall of 2019. Architects for the residence hall are from HACKER in Portland, with Gerding Builders LLC of Corvallis serving as general contractors. 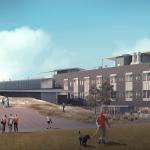