NEWPORT, Ore. – For the past two years, scientists from Oregon State University and the National Oceanic and Atmospheric Administration (NOAA) have surveyed the Pacific Northwest near-shore region mapping sites where underwater bubble streams signify methane gas is being released from the seafloor.

And what they have found is eye-opening. Since the first evidence of underwater methane was discovered in the late 1980s, only about 100 “seep sites” had been identified along the Northwest coast through 2015. They often were discovered by accident, when fishermen would spot anomalies on their fish-finders that turned out to be acoustic reflections of the bubbling methane gas.

But over the past two years the scientists – aided by new sonar technology on the Exploration Vessel (E/V) Nautilus, owned and operated by the Ocean Exploration Trust – have purposefully gone seeking evidence of underwater methane and have expanded the total number of offshore seep emission sites to a whopping 1,000 locations.

It is not yet clear whether the methane presents an opportunity for a new source of energy or a potentially serious environmental threat, but for now the researchers want to map the distribution of the sites and conduct research on the composition and sources of the gas. They believe they will discover new methane seeps this summer when they utilize several research vessels to conduct additional mapping off the Northwest coast.

“Using this new sonar system, we’ve mapped only about 38 percent of the seafloor and about 25 percent of the water column data from Washington to Northern California,” said Susan Merle, an Oregon State oceanographer who works out of OSU’s Hatfield Marine Science Center in Newport, Ore. “No doubt, there are more sites out there, and we hope to find them.”

The researchers will embark on another expedition this June aboard the E/V Nautilus and use a remotely operated vehicle during daytime to collect samples of gas, methane hydrate, seepwater, fauna and rocks right where the methane is exiting the seafloor. Investigating these samples will help tell the story of the origin of the seeping methane and its impact on life at these sites and in the overlying ocean.

During the night, they will do extensive mapping of areas not yet surveyed in an attempt to locate more methane seeps.

The researchers will make video of the ROV dives available to viewers live at https://nautiluslive.org/

The potentially vast storehouse of this potent greenhouse gas could provide an intriguing energy source, but it is widely distributed and may not be economical to extract, noted Robert Embley, an OSU geophysicist who spent much of his career with NOAA’s Pacific Marine Environmental Laboratory.

“It is very tricky and potentially hazardous to attempt to extract methane,” Embley said. “Mining would have all sorts of implications. When methane appears as a hydrate it can look like a chunk of ice or snow. But when you try to bring it to the surface, it immediately begins to decompose. In addition to hydrates, we’ve found hundreds of bubble streams, but their origin and scope remains to be seen.”

In their survey, the researchers have found that together with some free gas, much of the methane below an ocean depth of 500 meters (or about 1,600 feet), is found as solidified hydrates. Above 500 meters, it usually appears as a gas in bubble streams.

“One question we’d like to address is whether hydrates are formed by methane gas seeping out of the Earth and meeting the cold, deep seawater, or are the bubbles we’re seeing a result of the hydrates breaking down and releasing gas,” said John Lupton, a chemical oceanographer with NOAA/PMEL.

Just how much methane is off the Northwest coast is uncertain, the researchers say. But it appears to be a lot and it could cause potential environmental problems.

“One concern is what would happen during a major Cascadia Subduction Zone earthquake,” Embley pointed out. “It would add more permeability to the seafloor, add more pathways for the methane to escape, and increase the potential for its release to the atmosphere.”

So what is happening with all of the methane that is bubbling up out of the seafloor and into the Pacific Ocean waters?

Tamara Baumberger, a researcher with the Cooperative Institute for Marine Resources Studies – a joint OSU/NOAA center based at Hatfield – has sampled some of the bubbles from the site and found different chemical signatures that helped the researchers pinpoint the origin of the methane. Some of it was “thermogenic” – the result of organic material like dead plankton being heated up and transformed into the gas. Some was “biogenic,” in which the organic material was altered by microbial activity.

“When methane is in seawater, it often is oxidized into carbon dioxide by microbial activity, which can keep much of it from reaching the atmosphere,” Baumberger said. “The downside, of course, is that the newly formed CO2 is also a problem and it can both reach the atmosphere and increase ocean acidification.”

Baumberger said that methane released into shallow water can get into the atmosphere more quickly because the bacteria don’t have enough time to oxidize it. However, the researchers are unsure how many methane seeps lie in shallow water, which they define as less than about 150 meters.

“We know very little about methane seep distribution in shallow water because it is very difficult to map there,” Merle said. “But everywhere we looked for seeps, we found them. That’s one of our goals this June is to get a better handle on how prevalent the shallower seeps might be.”

OSU’s La Verne Kulm was one of the first to discover methane seeps off the coast in the 1980s, and a decade later, researchers documented ample methane at Hydrate Ridge off the Oregon coast. University of Washington scientist Paul Johnson mapped many of the Washington locations, and OSU’s Marta Torres found more hydrates off the Heceta Bank in 1998.

Beginning in 2016, though, the search began in earnest and the researchers have found a large aggregation of methane seep sites off the Coquille Bank near Coos Bay, as well as in the Astoria Canyon, “which is full of them,” Merle said. “Wherever we find canyons, we seem to find methane.”

They also discovered methane seeps off Newport, Oregon, in water that was only 40 meters deep.

Some of the methane samples included traces of helium, which is only found in the mantle, the researchers noted.

“This research has raised some interesting questions,” Baumberger said. “How common is mantle gas in the Cascadia Margin methane seeps? How stable is the system during an earthquake? Will a warming ocean lead to an increase in the release of methane? What we’re trying to do is identify how much is out there and establish a baseline. Then we can address these and other scientific questions.” 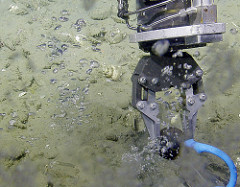