CORVALLIS, Ore. – Approaching the close of a 17-year tenure as Oregon State University’s president, Edward J. Ray today called on the state of Oregon, the federal government and Oregonians to help address college students’ mental health and basic needs and reduce the tuition burden that students and their families pay for college.

In his annual State of the University address to more than 950 people at the Oregon Convention Center, Ray called for greater access and affordability for all students to enjoy the benefits of college. He also said today’s college students face many challenges to complete their degrees, and said that support for students beyond the classroom is imperative.

“Going forward, we must reduce the cost of a college degree for learners across the nation,” Ray said. “We must reverse a trend where public higher education nationally has literally abandoned people at the lower end of the economic spectrum and soon the middle class. And we must end a risk of privatizing public universities because of a growing dependence on tuition.

“Each of us should be very concerned by these prospects. We should work together to ensure that public higher education remains a public good for Oregon, a public good that deserves increased state and federal support.”

Ray said that over the past three decades, the cost of an education at an Oregon public university has grown and is now paid two-thirds by students and one-third by the state. That is a complete reversal of previous student burden and state support.

“According to a report last year by the national State Higher Education Executive Officers Association, the amount the state of Oregon paid in 2018 per full-time student – while adjusted for inflation – was only $5 more than in 2008,” Ray said. “Thankfully, the Oregon legislature increased its support in 2019. Yet, an increase of $262 per full-time student annually still means 31 states contribute more to educating college learners than does Oregon.

“Is this the level of support we want for Oregonians and the future of our state and nation?” he asked.

Ray also called on Oregonians to invest in all Oregon students enrolled from pre-kindergarten through college.

“Please accept your role in addressing Oregon’s funding needs for all levels of the education continuum,” he said. “The future is in each of our hands, and we need champions outside of higher education.”

Attendees saluted Ray with several standing ovations throughout the event. The Oregon State University Marching Band closed the event with a set of songs, including the Oregon State Fight Song.

Ray, who will step down as OSU’s president on June 30, said the university enjoys great momentum and is providing significant impact in Oregon, across the nation and globally. He also said OSU faces challenges and uncertainty, as well as opportunities and responsibilities. The university must continue to invest in and rethink ways to serve students of color, first-generation students and students with great financial need, Ray said. Oregon State also must address student mental health, particularly the crisis of anxiety and despair that is growing among young adults nationally.

Ray cited several steps the university has taken to address these needs. Student and faculty leaders collaborated with OSU counseling staff to add a syllabus statement for all courses that encourages students struggling with anxiety or depression to seek faculty support. The university has also implemented university-wide online mental health wellness training for faculty, staff and students.

In another step to support students, Ray announced that Thomas Toomey, an OSU graduate from the College of Business and an Oregon State University Foundation trustee, has established a $1 million endowed fund to address increased student needs such as food insecurity and emergency housing.

“Thanks to the work of many, we are making headway in these areas, but there is much more work to do,” Ray said.

Public skepticism nationally about the value of higher education continues, Ray said, yet he noted that OSU graduates are faring well.

“According to a survey of OSU graduates just completed by ECONorthwest, 72% of those responding work in a field broadly related to their undergraduate degree,” Ray said. “And the annual median income of $80,000 to $100,000 enjoyed by the OSU graduates responding to the survey is 33% to 66% greater than the median income of all Oregonians and U.S. residents with college degrees reported by census data.”

In his speech, Ray also shared many OSU achievements from the past year, including:

In his last major address in the Portland region, Ray, reflected on some of the changes he has seen during his service as OSU president. During the past two decades:

“While the past decade or more has been about adding additional teaching, research and student support facilities, the future will be more about improving existing university facilities – and expanding our OSU-Cascades campus – to serve student success, faculty and research excellence, outreach and our mission as a 21st century land grant university,” Ray said. “At OSU, we have a roadmap for the future.”

Ray closed his address by reaffirming the honor and joy he felt serving as OSU’s president.

“The momentum enjoyed within Oregon State University will continue, and the university’s impact will continue to grow far into the future,” he said. “And I guarantee you that the best is yet to come for OSU, the students we serve, and the people we serve in Oregon and across the nation and world." 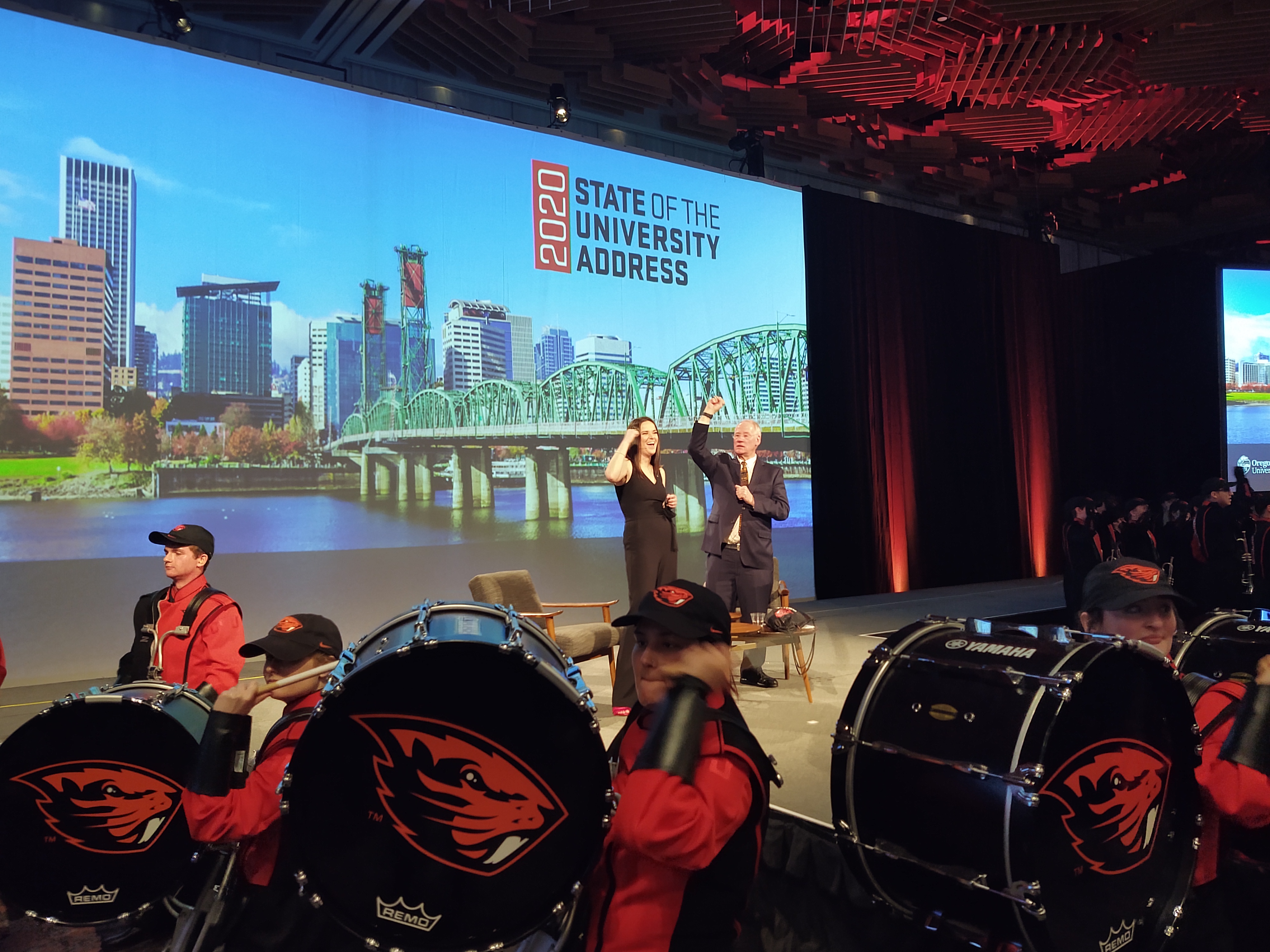 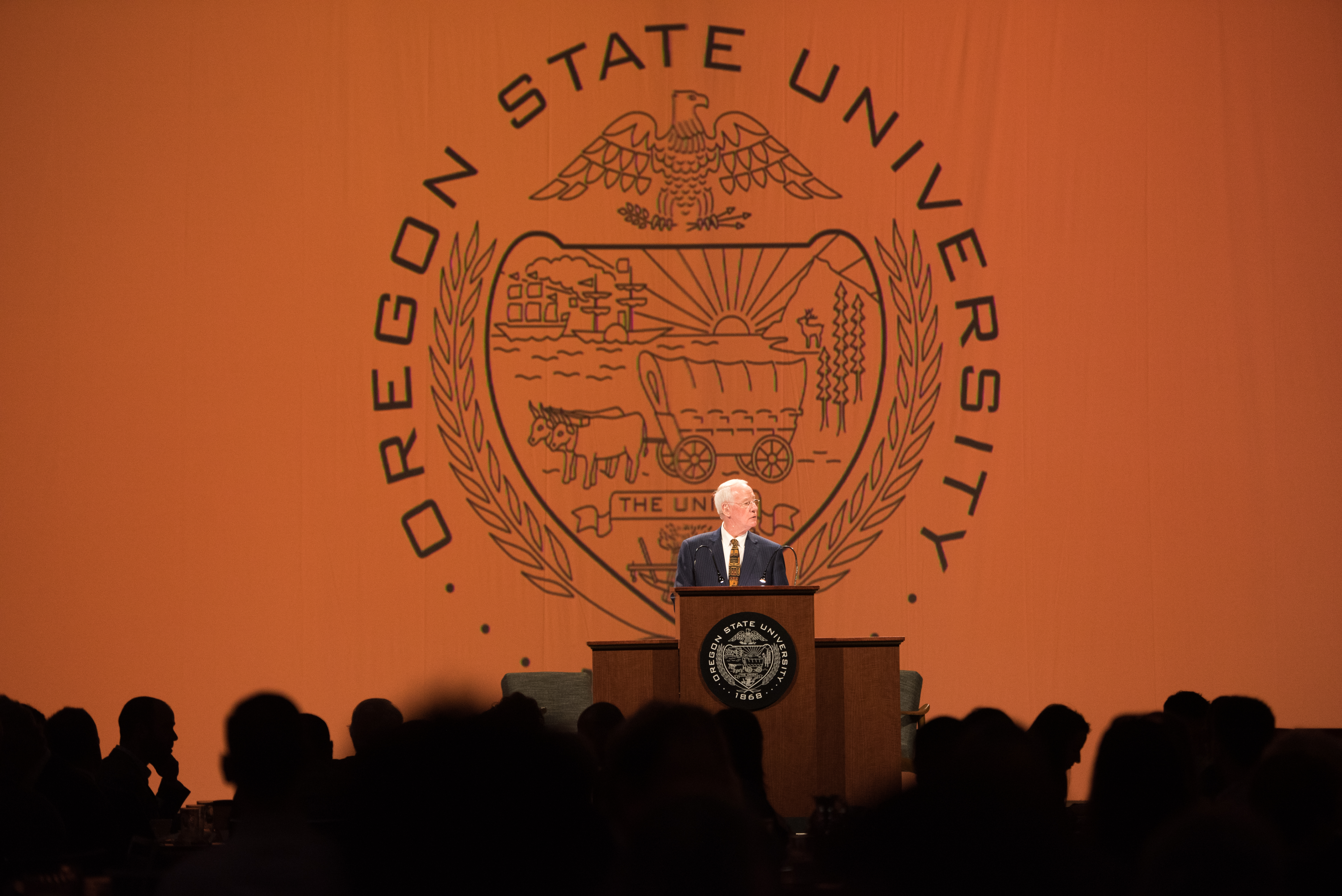 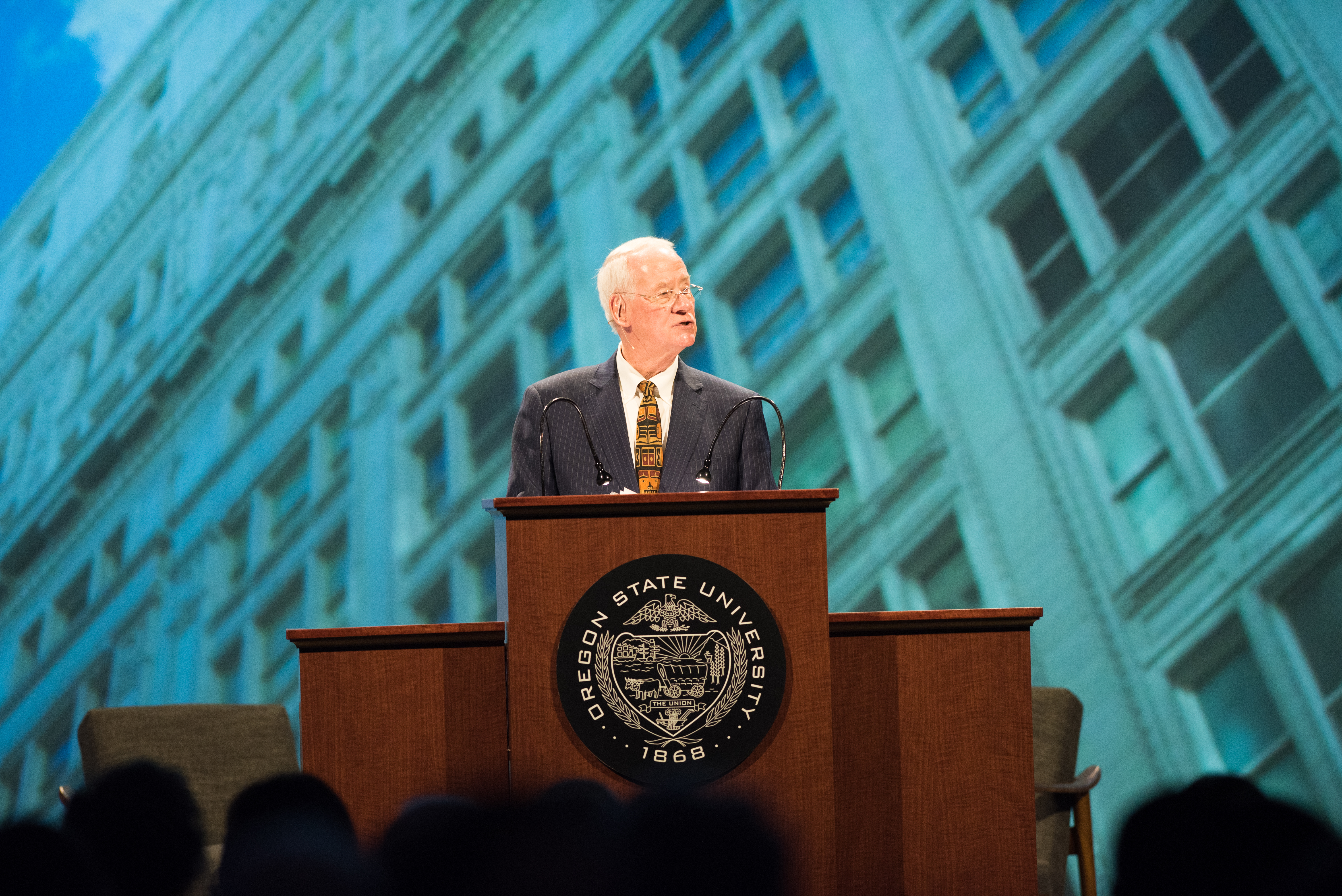