CORVALLIS, Ore. – Jose Reyes, professor emeritus of nuclear engineering at Oregon State University and founder of NuScale Power, has been elected to the National Academy of Engineering.

Reyes, on the faculty of OSU’s College of Engineering for 30 years, was one of 99 new members elected this year, each one of the world’s most accomplished engineers.

“It is extremely gratifying to see my innovative research, born at Oregon State University, mature into the cutting-edge NuScale Power technology now poised to change the world,” Reyes said. “The greatest validation of an engineer’s innovation is to see it put into practice for the benefit of people and the planet. I am greatly honored to be elected to the National Academy of Engineering and look forward to contributing to its mission.”

The National Academy of Engineering has 2,555 peer-elected members, all senior professionals in business, academia and government, who provide leadership regarding how engineering, technology and quality of life relate to one another.

Academy membership honors those who have made outstanding contributions to “engineering research, practice or education” and to “the pioneering of new and developing fields of technology.”

Reyes will be formally inducted Sept. 30 during a ceremony at the NAE’s annual meeting in Washington, D.C. 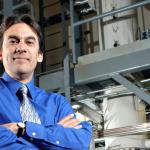