CORVALLIS, Ore. – On the heels of Oregon’s most expensive wildfire season ever in 2018, researchers at Oregon State University are ramping up efforts to better predict how the blazes behave, including how they generate fire-spreading embers.

A team led by David Blunck of OSU’s College of Engineering has been chosen by the U.S. Department of Defense to spearhead a new $2.1 million effort to study the burning of live fuels.

OSU will partner with the U.S. Forest Service on a four-year grant awarded through the DOD’s Strategic Environmental Research Development Program (SERDP).

“The DOD is interested in this because they have a lot of land, and it burns,” said Blunck, an assistant professor of mechanical engineering. “Live fuels are basically trees that are green and living. These trees are often what torches, but historically, dead fuels have primarily been studied.”

The work will be built around the theory that there are likely just a handful of factors – such as pyrolysis, the decomposition that results from high temperatures, and the products of that decomposition – that cause differences in burning behavior when live fuels burn.

“Most live fuel studies tend to be fuel specific, controlling for variation in burning behavior based on time of year and moisture content, but with those results, it’s hard to know how new fuels will burn, or even how the same fuel will burn outside the conditions that have been studied,” Blunck said. “So it’s really better to understand what’s driving the sensitivity when you have different fuels. Our theory is that it’s just a few processes that cause the differences when you burn different live fuels, and if we can understand what they are, we can better predict how new species would burn.”

The research will provide Department of Defense managers with fire models that can predict ignition, burning rate and fuel consumption for mixtures of live and dead fuels, allowing them to more effectively plan prescribed burning as well as wildfire responses. It will involve a mix of lab work, modeling and field studies.

“That height is not very large for a forest perspective, but for testing for wildfire purposes this is typically not done, and never for the number of trees that we have burned,” he said.

Most wildfire research, Blunck explains, involves either prescribed burns, or work in a laboratory on samples up to a size of roughly 1 meter.

“In the lab you can control all the parameters like temperature, size and moisture content, but how well do the results scale?” he said. “With a prescribed burn, you’re researching under actual conditions, but with the data you get it’s very hard to understand cause and effect. There’s so much out of our control that it’s hard to know what’s driving the various phenomena.

“With trees that are about 10 feet tall, we can bridge the scales between the laboratory and prescribed burns,” Blunck said. “We can look at many species and start to vary the parameters we think are important. Our experiments are on an intermediate scale but have a replicate size that is not rivaled by any study I have ever found.”

In addition, last December Blunck and other researchers studied the effect of fire retardant on ember generation and found that under some conditions, trees coated in the retardant sent off fewer embers that contained enough energy to start a new fire. This effort was in partnership with an industry sponsor, P N Solutions.

“Embers are wildfires’ most unpredictable modes of causing spread,” Blunck said. “By understanding how embers form and travel through the air, we can more accurately predict how fire will spread.”

Techniques for studying embers include infrared videography, collecting embers in trays of water and measuring scorch marks on squares of fire-resistant fabric placed on the ground at varying distances from the fire.

“By using fire-resistant fabric to collect embers, in conjunction with trays filled with water, the fraction of ‘hot’ embers can be determined and used to help predict spotting,” said Tyler Hudson, a graduate student in the College of Engineering.

The char marks on the fabric are used to estimate how much energy an ember has when it lands. Trees coated in fire retardant tended to produce bigger embers, but generally with lower energy.

In Oregon last year, the cost of fire suppression for the first time exceeded half a billion dollars, according to the Northwest Interagency Coordination Center, which provides logistical support and intelligence for federal and state wildland fire suppression agencies. 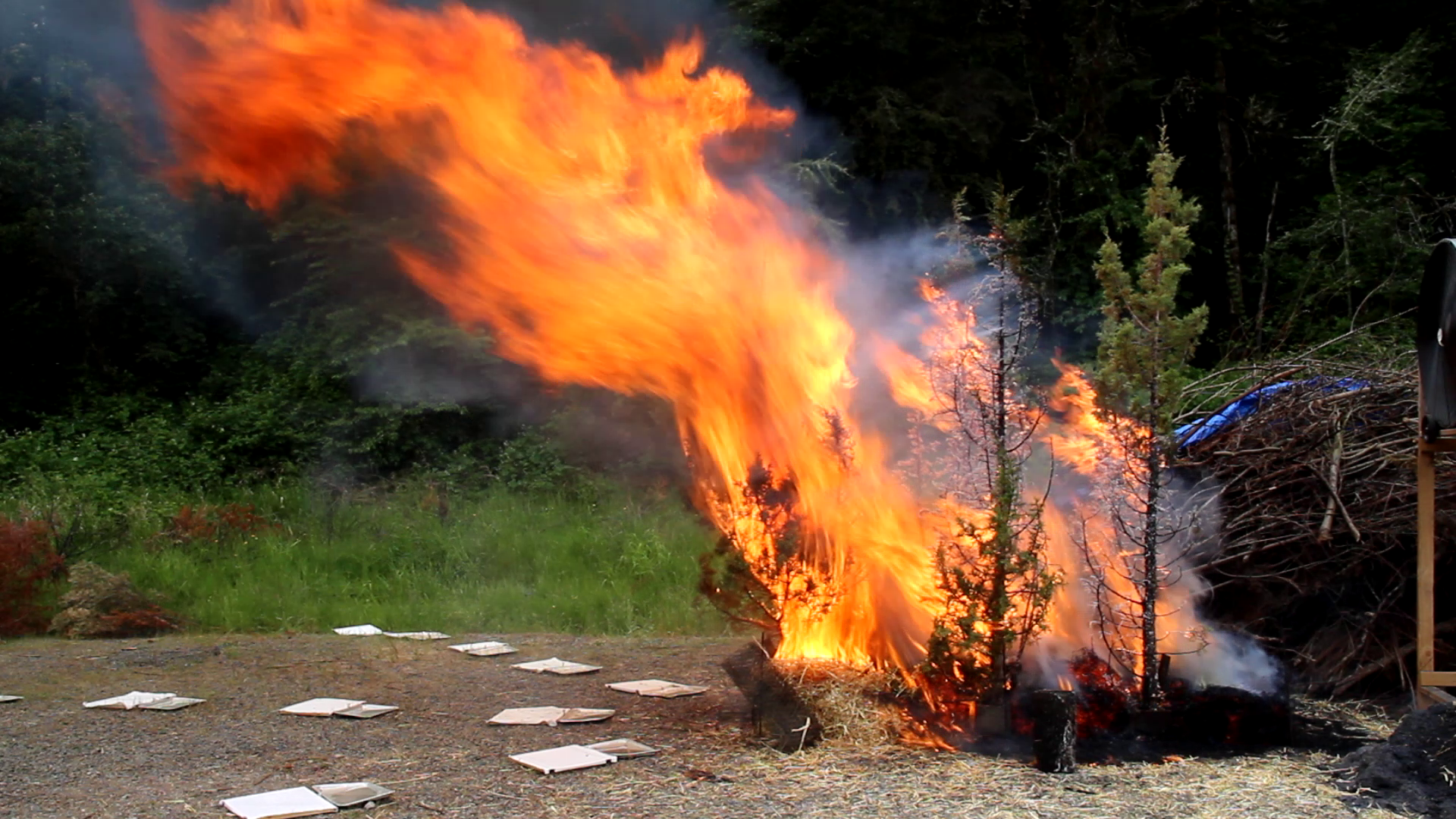