CORVALLIS, Ore. – An anonymous donor has made a historic $50 million lead gift to transform Oregon State University’s Reser Stadium into a national best-in-class football facility with year-round programs and facilities for all OSU students, faculty and staff.

The $153 million project, which will fully renovate the stadium’s west side, received approval by the OSU Board of Trustees Finance and Administration Committee on Jan. 28 to enter into the design phase. Plans call for final approval of the project to be considered by the board of trustees at its May meeting.

The $50 million gift to the OSU Foundation is dedicated to the Reser Stadium project and equals the largest donation ever to Oregon State University. In the last four years, the university has received a $50 million gift from alumnus Gary Carlson to name the Gary R. Carlson College of Veterinary Medicine, and an anonymous $25 million gift to support construction of a $70 million Arts and Education Complex scheduled to begin in fall.

When approved, construction would begin immediately following the 2021 football season to enable the project to be completed for the start of OSU’s 2023 football season. OSU will continue to play at Reser Stadium during construction.

“This national best-in-class stadium will serve all of our university’s students, faculty and staff; will provide for an enviable fan experience on game days; and will continue OSU’s significant investments in Beaver football and in athletics programs for all OSU student-athletes.”

The project involves the complete demolition and rebuilding of the west side of Reser Stadium and the construction of year-round university facilities, including a new state-of-the art interactive welcome center for new students considering attending OSU; new health center facilities for Corvallis campus students; health care facilities for OSU faculty and staff; and additional meeting space for university students, faculty and staff.

Completing Reser Stadium will be funded through philanthropy, premium seating revenue, space lease revenues and other revenues from the stadium and new facilities. In addition to the $50 million gift, a separate anonymous gift of $10.5 million has been made to the project along with other Reser Stadium gifts to the OSU Foundation. The project has an overall fundraising goal of $85 million and so far has raised $64.5 million.

Once completed, Reser Stadium will offer new premium and general seating options on the west side that will provide the closest proximity to the playing field of any college football stadium in the country, said Scott Barnes, university vice president and director of OSU Athletics.

When finished Reser Stadium will feature a 360-degree stadium concourse and include expanded concessions and restroom facilities, enhanced sightlines, accessibility improvements and other fan amenities comparable to the east side of Reser, which was renovated prior to the 2005 season, Barnes said.

“I am grateful for our donors’ incredible generosity and enthusiasm for this project,” said Barnes. “By completing Reser now we ensure the long-term financial sustainability for the OSU Athletics Department and all student-athletes. Increased revenue will provide financial stability throughout OSU Athletics where 70% of the revenues required to operate 17 women and men’s varsity sports are generated from football and Reser Stadium activities.

“We surveyed Beaver Nation to explore and identify the most in-demand facilities, spaces and experiences,” Barnes said. This project meets that demand. It will not be an expansion of stadium seating, but rather a right-sizing of desired experiences and amenities to greatly improve the fan experience during games. Meanwhile, completing Reser Stadium will enhance the recruitment of student-athletes and students to Oregon State University generally, while supporting and strengthening our opportunity for football success in the Pac-12 Conference and nationally.”

“This is a game changer for our football program,” Oregon State Head Football Coach Jonathan Smith said. “We want to show our recruits that Reser Stadium is intertwined within our community and campus every day of the year. As we bring families and recruits to campus, they will see the construction of the stadium and see the momentum of this program.

“The level of support this program, our athletic department and the university receives from Beaver Nation is always impressive,” Smith said. “I’m so grateful to everyone who is contributing to make this project a reality.”

Alexander said the state-of-the-art student welcome center will serve as the first on-campus point of connection to welcome prospective new students and their families to OSU. The center will be located within the southwest corner of the stadium.

An approximate 35,000-square-foot medical facility for students will be located on the southeastern corner of Reser Stadium. The university is exploring the possibility of a partnership with a private company to provide medical services to OSU employees and community members.

“These gifts are the most recent example of the incredible fundraising momentum that Oregon State University has experienced since the 2014 completion of the Campaign for OSU, which raised $1.14 billion,” said Shawn L. Scoville, president and chief executive office of the OSU Foundation. “The university has received its largest three gifts in history in the last four years. Our most generous donors are inspired by OSU’s vision and want to be a transformative part of its trajectory, and we couldn’t be more grateful.”

“We are thrilled by these lead gifts,” said John Stirek, chair of the OSU Foundation’s board of trustees. Stirek and his wife, Kate, are serving as volunteer leaders for the Completing Reser Stadium fundraising effort and have made a $2.5 million gift to the project. “For years, donors have expressed interest in the role that a completed stadium would play in elevating the entire university. These lead gifts are an affirmation of that enthusiasm, positioning us well to meet our $85 million fundraising goal for the project.”

Completing Reser Stadium by renovating the west side is included in OSU’s 10-year capital forecast.

Stadium capacity was reduced in 1990 after construction of the original Valley Football Center. In June of 1996, an enlarged Valley Football Center opened. The center was expanded again in 2017. The east side of Reser Stadium was renovated prior to the 2005 season and included a double-decked grandstand featuring chair-backed seats, 22 luxury suites, a club area, and a loge area that includes a game-day restaurant and premium stadium box seating areas. In 2016, the Terrace was introduced to Reser Stadium, providing a unique fan experience showcasing premier food and beverages from throughout Oregon. 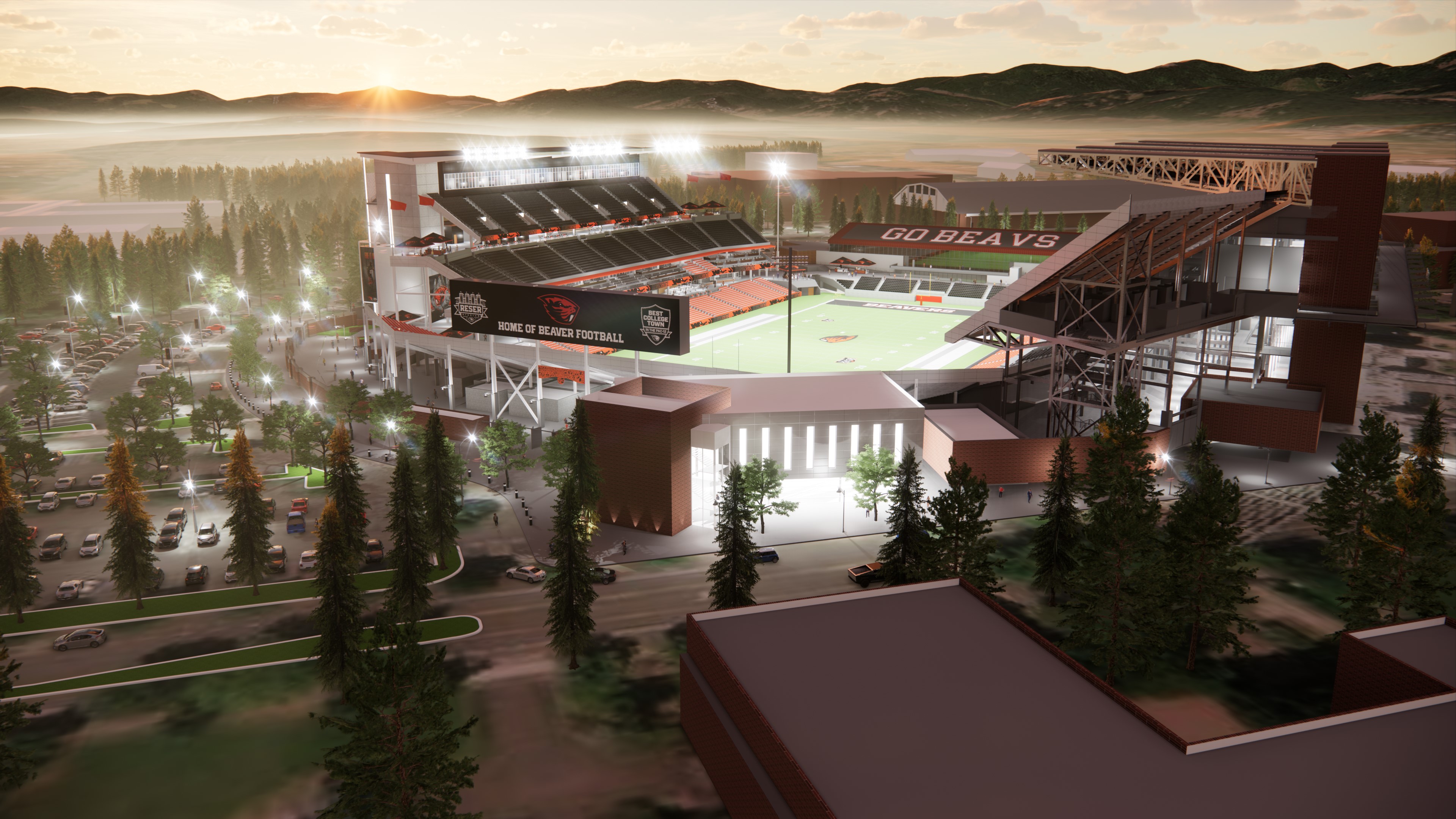 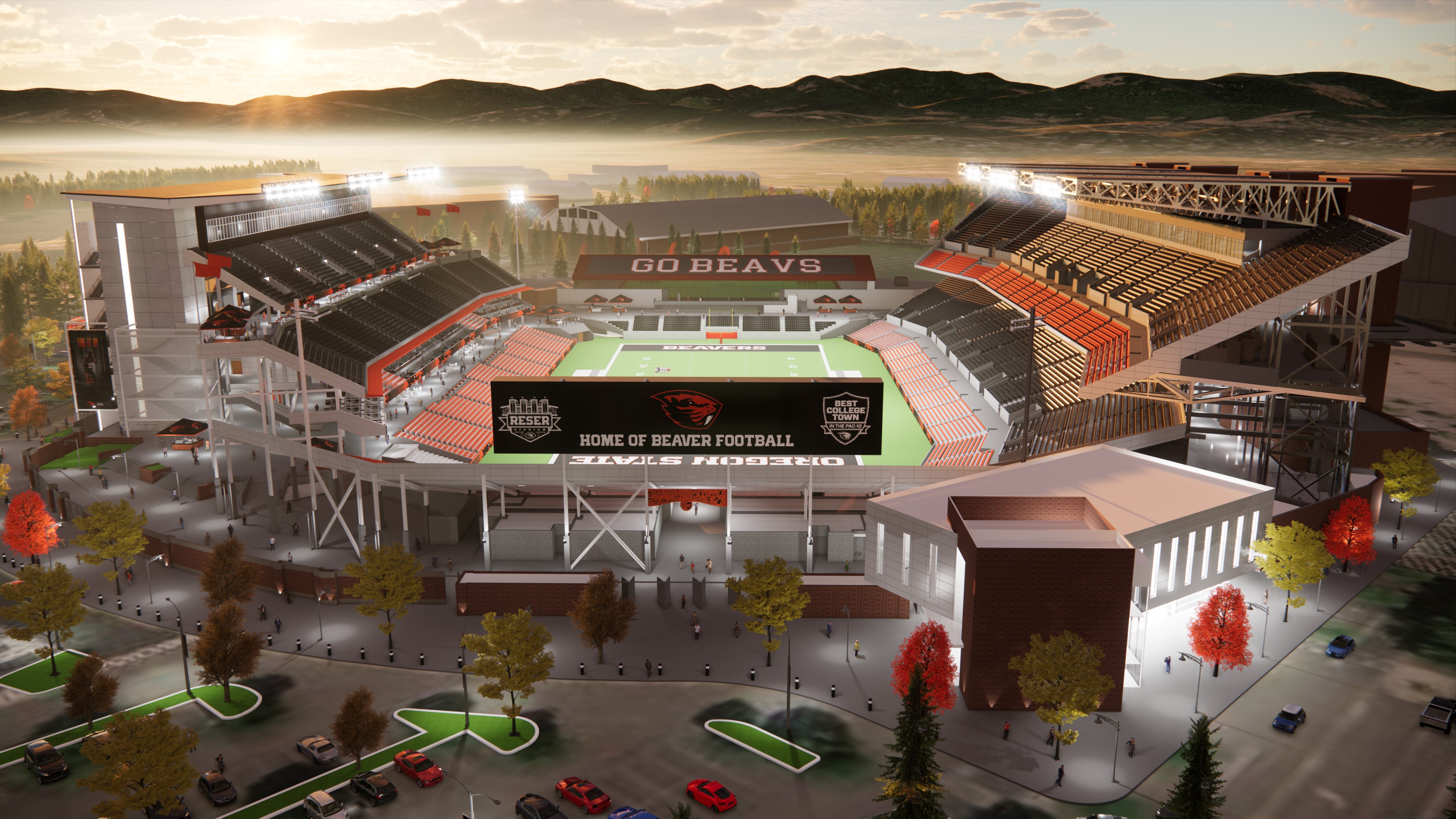