NEWPORT, Ore. – For the past two-plus years, the carcass of a 78-foot blue whale that washed ashore near Gold Beach, Oregon, in November 2015 has been submerged in Yaquina Bay allowing nature to run its course by having scavengers clean the bones.

The cleansing process is nearly complete, according to researchers with the Marine Mammal Institute at Oregon State University, who hope to bring the skeleton to the surface and treat it with chemicals to get oil out of the bones. Eventually, they hope to display it for the public as an educational exhibit at the new Marine Studies Building that OSU will open in late 2019 on the Hatfield Marine Science Center campus in Newport.

There’s just one problem: Even with volunteer labor, the project will cost $125,000 that the institute does not have.

“It’s critical to get the oil out of the bones to help preserve the skeleton and keep it from becoming rancid,” said Bruce Mate, an OSU whale expert and director of the institute. “The chemicals needed are both carcinogenic and flammable, so they have to be handled carefully. They are expensive and need special recycling procedures.”

Mate has some expertise in the process. He oversaw the graduate student preservation project of a 30-foot minke whale some 40 years ago that is hanging outside of the Guin Library at OSU’s Hatfield Marine Science Center in Newport. “It’s holding up very well,” he noted.

The blue whale project is much bigger. For starters, blue whales are the largest animals to have ever lived on Earth. A team of nearly 30 volunteers, including OSU undergraduate and graduate students, spent 10 days removing the flesh from the blue whale in 2015 – taking off about 58 tons in the process.

The bones that remain are immense – a small school bus would fit inside the whale’s mouth.

“We had sections of the vertebrae that two people together could not lift, so we had to use a small front-end loader,” Mate said. “To properly treat the bones, we’ll have to fill large livestock troughs with the chemicals and do it more or less one bone or section at a time.”

In addition to the chemicals, the researchers will need a secure place indoors to work and assemble the project. Mate said about 10 percent of the oil in a whale is in the bones.

“In the olden days, whalers just extracted oil from the whale’s blubber – an exterior blanket of fat that also insulates whales from losing body heat,” he said. “As whales became scarcer, some whalers also rendered oil from the bones.  Just setting the bones out in a dry yard to get the oil out does not work. The remaining oil in the bones needs to be extracted or they will leak over time and have a foul odor.”

A blue whale washing ashore in Oregon is very rare, Mate said. In fact, until the 2015 event, there hadn’t been a documented case of a blue whale beached in Oregon since Lewis and Clark made their very first historic journey to the coast, where they saw Native Americans salvaging edible parts from a blue whale.

“The emotional impact of seeing such a large whale alive is profound – and I’ve seen dead ones all around the world,” he said. “Many of the people around me while we worked on this dead whale occasionally broke down in tears. It was a life-changing moment for some of them. At more than 100 tons, some blue whales are the equivalent of 1,300 people in biomass.”

Mate hopes to capture some of that impact with a display of the articulated skeleton, where it can be seen by the public. Divers have been checking on the bones, which are submerged in huge bags and tied to railroad wheels in Yaquina Bay. Most of the bones are ready for treatment, though the skull still has quite a bit of flesh to remove.

“We just need the funding,” Mate said. “The job is a big one and will require specialized equipment along with the chemicals. Unfortunately, state and federal agencies are not set up to fund this kind of work, but the educational value for the project would be immense. We know we can find volunteers for the labor effort and we’re hoping to secure some private support to get us launched.”

For more information on the Blue Whale Articulation project, contact the OSU Marine Mammal Institute at 541-867-0202. 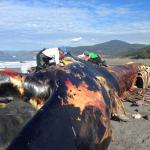 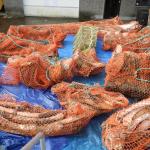