The series A investments will accelerate product, technology and business development and bring Agility Robotics’ total amount raised to $8.792 million, according to Agility founder Jonathan Hurst, associate professor of mechanical engineering at OSU.

“Agility Robotics is solving the mobility problem faced by robots to allow machines to work with humans, for humans and around humans,” said Hurst, who worked with the OSU Advantage Accelerator in starting his company. “Robotic, legged locomotion will enable a major transformation of our world, with early applications in real-time telepresence and data collection in human and natural environments such as disaster sites or forest fires; warehouse logistics, moving boxes and loading and unloading; and then on to larger applications such as logistics and package delivery for fast and inexpensive 24/7 service, and in-home robots for telepresence and assistance.”

Hurst, the Dean’s Professor at the College of Engineering, said walking robots will one day be a common sight – much like the automobile, with a similar impact. The limiting factor to date, he said, is the science and understanding of legged locomotion, not the speed of computing, strength of materials, or power of motors.

But key research at Oregon State has enabled a breakthrough.

ATRIAS, a research robot developed at the Dynamic Robotics Laboratory at Oregon State, was the first robot to reproduce human gait dynamics. Following ATRIAS was Cassie, the first product for research and development capable of walking and running.

“Agility Robotics is building the engineering know-how and the organizational capacity to capture and implement these research discoveries and create robots that will be pragmatically useful in the real world,” Hurst said.

About the Oregon State University Advantage: Oregon State is committed to innovation that leads to new businesses, jobs and economic growth for Oregon and the nation. That commitment now includes the Venture Accelerator, to move promising ideas out of the laboratory and into the marketplace; and the Industry Partnering Program, which helps improve the success of existing business and industry. 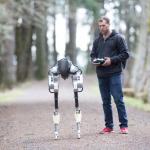