The project to determine community prevalence of COVID-19 launched April 25, 2020, with door-to-door sampling of 455 people in Corvallis. Since then, TRACE field workers have done sampling on 11 other weekends around the state – in Bend, Newport, Hermiston, Eugene and Redmond in addition to Corvallis. In all, TRACE has visited 3,822 residences and gathered 6,568 samples from household members.

“Sequencing has been critical in conducting surveillance for dangerous variants,” Tyler said, “such as B.1.1.7,” often referred to as the UK variant. “Sequencing viral RNA from wastewater has greatly amplified the value of wastewater surveillance, allowing us to reach into communities all around Oregon to check for these variants.”

In September, TRACE began prevalence testing among students, faculty and staff on OSU campuses in Corvallis, at OSU-Cascades in Bend, and at the Hatfield Marine Science Center in Newport as part of a branch of the project known as TRACE OSU. Add the more than 53,000 samples collected during TRACE OSU and the total tops 60,000.

That total represents 1.4% of all the COVID-19 testing done in Oregon since the start of the pandemic, OSU College of Science Dean Roy Haggerty says, and has resulted in more than 400 cases of COVID-19 being identified. The majority of those were from people without symptoms, meaning they likely wouldn’t have known they were infected without the efforts of the 400 OSU faculty, staff and students involved in the TRACE project. As a result, these individuals and local county health authorities were notified, enabling care and contact tracing that helped reduce the risk and spread of COVID-19.

The TRACE project, which OSU started with the help of a grant from the David and Lucile Packard Foundation, was born of an early March 2020 brainstorming session among Haggerty, OSU population biologist Ben Dalziel and University Distinguished Professor Jane Lubchenco. TRACE stands for Team-based Rapid Assessment of Community Level Coronavirus Epidemics.

The project quickly grew to include epidemiologists Jeff Bethel and Dean Javier Nieto from OSU’s College of Public Health and Human Sciences, as well as Justin Sanders, a parasitologist and expert in molecular diagnostic testing who works in the Carlson College of Veterinary Medicine and Oregon Veterinary Diagnostic Laboratory, and Tyler, an authority in pathogen genomics.

After the first weekend of sampling, the TRACE team expanded to include Kathy Higley, former head of the School of Nuclear Science and Engineering and an expert in disaster response and complex project management; Katie McLaughlin, a statistician with expertise in sampling designs and analyzing public health data; and Tyler Radniecki and Christine Kelly, researchers in the OSU College of Engineering who lead the wastewater testing for TRACE.

“Oregon State has really come together and mobilized to tackle the hard work necessary to understand and combat this pandemic,” Bethel said. “And of course, we can’t take on this kind of challenge without the kind of support we’ve received from our funders.”

A month into the launch of TRACE-COVID-19, the project expanded to include its wastewater testing component. Radniecki and Kelly’s work, Coronavirus Sewer Surveillance, was initially funded by the National Science Foundation.

In addition, the researchers learned that concentrations quantified at a city’s wastewater treatment plant strongly correlate with both clinical case counts recorded by county health officials and prevalence estimates following TRACE sampling. This led to a $1.2 million Oregon Health Authority grant in summer 2020 to expand sewer surveillance to 43 wastewater treatment plants across the state for 30 months.

In November, Oregon State was awarded an additional grant by the Packard Foundation, pushing the foundation’s support for TRACE past $3 million, to create a national TRACE Center to grow the university’s COVID-19 public health project throughout the United States.

“TRACE programs are starting at two other major universities across the country as part of the coordination network we are leading, funded by the Packard Foundation,” Dalziel said. “We hope to grow the network to include more university partners in the coming months, focusing on minority-serving institutions.”

TRACE is a collaboration of five OSU colleges – Science, Agricultural Sciences, the Carlson College of Veterinary Medicine, Engineering, and Public Health and Human Sciences – plus the OSU Center for Genome Research and Biocomputing. The project works in collaboration with county health departments around Oregon as well as the OHA.

“One of the most exciting things about this project is that it shows how a land grant university can fulfill its mission to serve communities,” Sanders said. “We’ve brought incredible expertise together and that’s the kind of collaboration we need in this type of crisis.”

Data gathered and analyzed by TRACE provide important guidance for officials deciding which public health actions make the most sense in protecting their communities, added McLaughlin.

“COVID-19 generates volumes of data that need statistical interpretation so our leaders can use the information for maximum benefit,” she said. “Thanks to all of the support we continue to receive, and thanks to Oregon State University’s spirit of teamwork and service, we’re able to play a key role in contributing to communities’ safety.”

TRACE has tested traditionally underserved and racially diverse populations, Dalziel noted, adding that outreach materials and other messaging have been made available in multiple languages.

“Our goal with TRACE was to partner with communities to create the capacity to rapidly sense and respond to local epidemics,” Dalziel said. “The project has been successful, but this work is really just beginning. We are focusing more on viral variants and on leveraging the work of the past year to create capacity that lasts beyond the acute phase of this pandemic, recognizing the fact that the next pandemic will likely be within our lifetimes.” 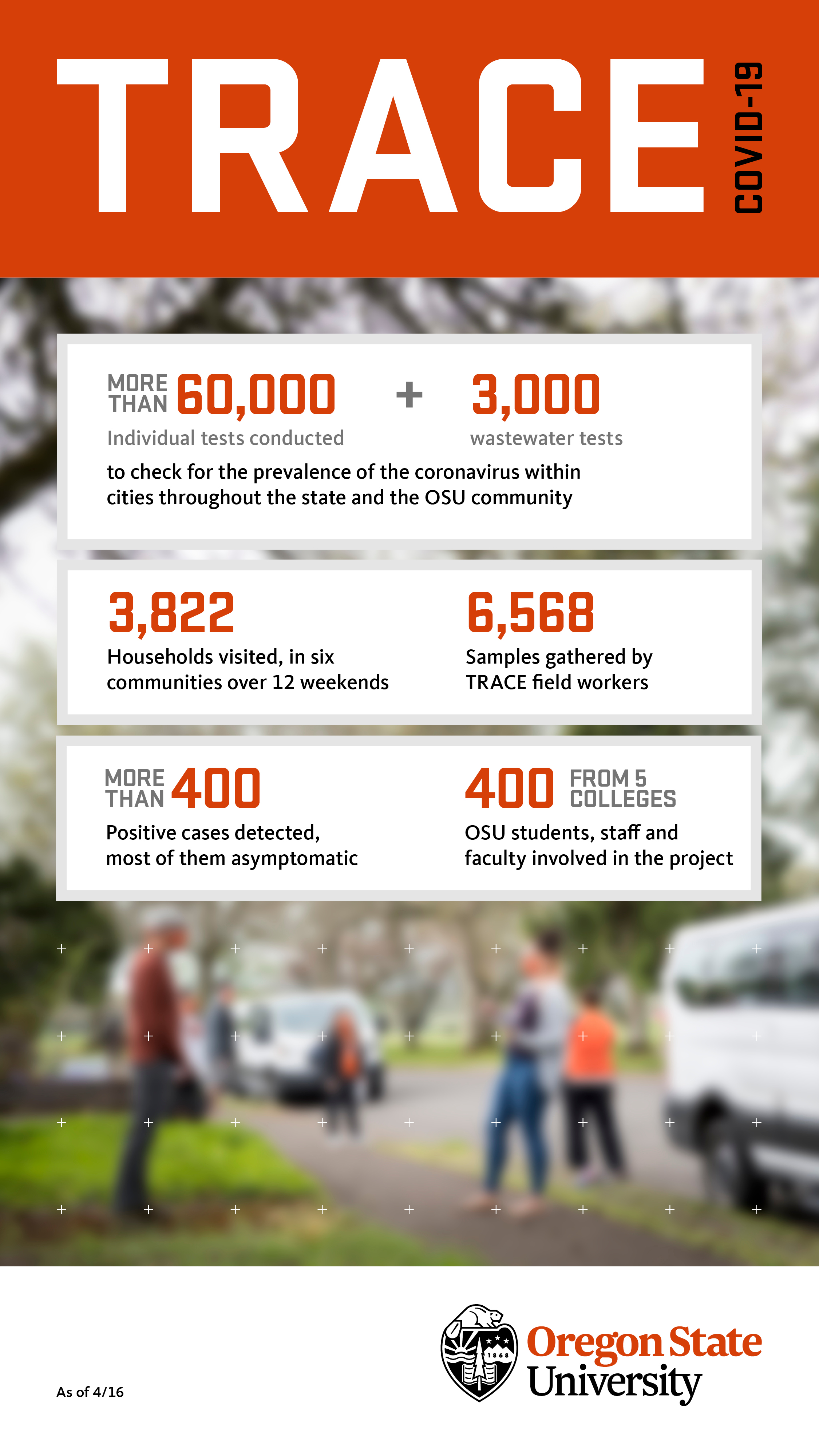