The study, motivated in part by hundreds of bridges being destroyed during recent tsunamis off the coast of Japan and in the Indian Ocean, advances the understanding of the physics at work when a tsunami slams into a bridge – opening the door to designing coastal spans that are better able to withstand inundation by the giant waves.

The researchers say it is not enough just to think in terms of overall tsunami load on a bridge – the load on the bridge’s individual structural components needs to be considered as well.

Over the past 15 years, big earthquakes whose epicenters were in the ocean off the coasts of Japan and Indonesia have caused tsunamis that killed more than 250,000 people and caused more than $200 billion in damage. The damage includes washing away or otherwise dislodging hundreds of bridges, emphasizing the need to better understand the wave impacts’ underlying physics.

The research, published in the Journal of Marine Science and Engineering, involved the construction of a 1:5 scale model of an open-girder bridge at the University of Nevada-Reno.

The finished model was then shipped to OSU for testing in the O.H. Hinsdale Wave Research Laboratory’s Large Wave Flume, which is 104.24 meters long, 3.66 meters wide and 4.57 meters deep.

“All structural details were included, like steel girders and a concrete deck representing the roadway,” said lab director Pedro Lomonaco, a study co-author. “The bridge was fully instrumented to measure pressures, forces and accelerations of the bridge as we performed a series of tests on the impact forces of tsunami waves.”

The waves exert both horizontal and vertical forces, and results showed that those two maximums don’t necessarily occur at the same time. That’s an important finding given the prevailing thinking.

“Contrary to the recommended practice, simultaneously applying maximum horizontal force and maximum vertical force at the center of gravity of the bridge deck does not allow for a conservative uplift estimate for individual connections between structural components,” said co-author Solomon Yim of the OSU College of Engineering.

Most studies to date, Yim and Lomonaco note, have investigated total loading and not the stress placed on individual girders, deck chambers, bearings and connections.

“The breaking of the bearing connections was the main type of bridge damage seen in recent tsunamis, showing that it’s critical to quantify what the tsunami is doing to these components and decipher the underlying physics,” Yim said. “Our studies reveal a complex bridge inundation mechanism that consists of three uplift phases and one downward phase, with each phase maximizing the demand in different structural components.”

Yim, Lomonaco and collaborators at Nevada-Reno developed a new, physics-based methodology that engineers can use to design bridge connections, steel bearings and columns to better withstand tsunamis.

Modifying the model bridge’s vertical and horizontal stiffness, they found that the transmission of the forces to the supporting substructure changed significantly.

“The high pressure that developed under the bridge played a significant role on the stability of the bridge, and different mitigation measures were tested, from closing the gaps between girders to incorporating venting on the concrete deck,” Lomonaco said. “The experiments created a comprehensive database for design guidelines and computational modeling development and validation. Findings of this and forthcoming studies on the interaction of bridges and tsunamis can be directly applied in the design and retrofit of bridges. For example, the effect of venting to reduce the development of high under-pressures.”

Ian Buckle and graduate student Denis Istrati of the Nevada-Reno led the study, which was supported by the Federal Highway Administration and the Oregon Department of Transportation.

“Ian Buckle is an expert in bridge design and large-scale experiments,” Yim said. “Tsunami impact loads are more of my and Pedro’s area. This work put UNR’s and OSU’s expertise together.” 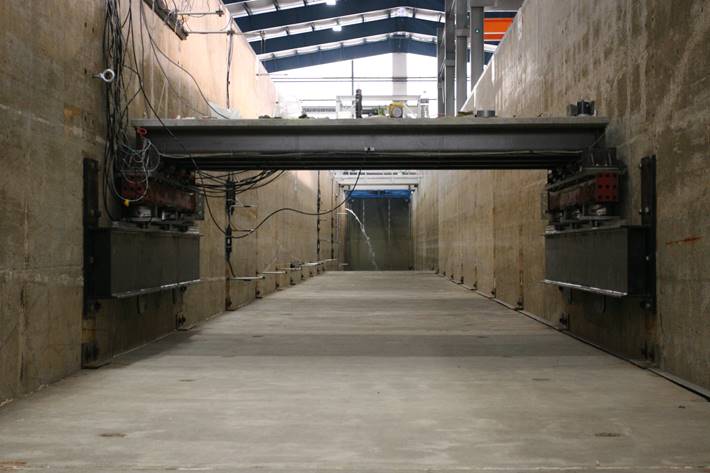 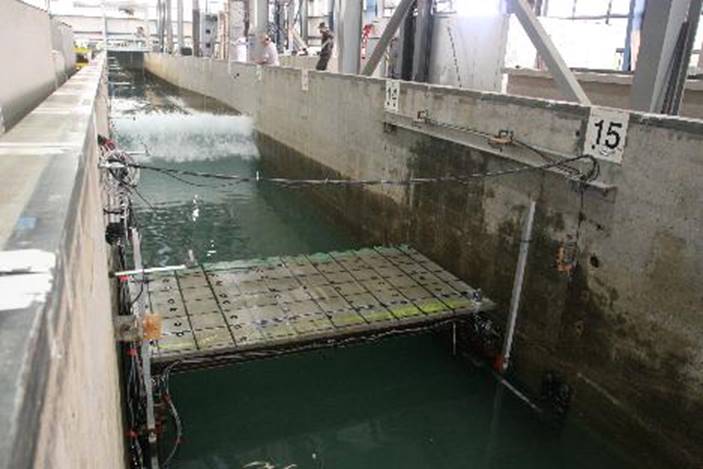 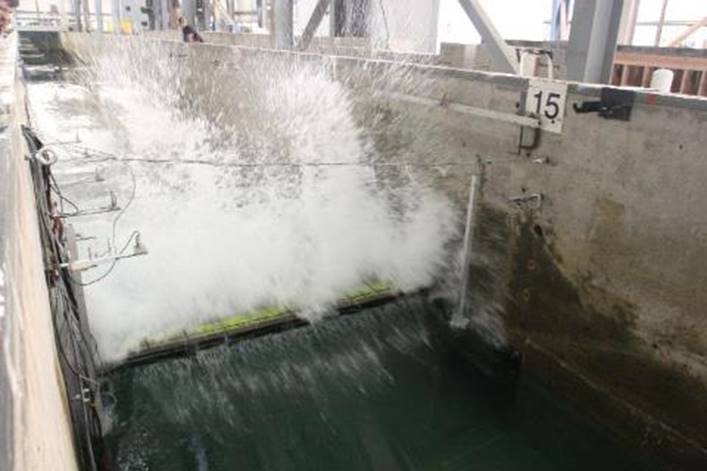