Peace accord in Colombia has increased deforestation of biologically-diverse rainforest

CORVALLIS, Ore. – Since the end of the long-running conflict in Colombia, large areas of forest have been rapidly converted to agricultural uses, suggesting the peace agreement presents a threat to conservation the country’s rainforest, a new study from Oregon State University shows.

In 2016, Colombia officially signed a peace agreement ending the country’s six-decade civil war, which mainly took place within the Andes-Amazon region, an extremely biodiverse rainforest and a critical biological corridor.

Some deforestation was expected after the peace accord was reached, but an analysis of 30 years of land transfers – a term used to describe changes in control and use of a parcel of land – showed a 40% increase in conversion from forest to agriculture in the post-conflict period.

“When the peace accord was finally signed in 2016, that was the moment to re-open conversations about the land,” said the study’s lead author, Paulo J. Murillo-Sandoval, who conducted the research as part of his doctoral dissertation at OSU. “The peace accord is 300 pages long and the word forest appears just three times. The forest was not taken into account.”

The findings, which were just published in the journal Global Environmental Change, underscore the potential for negative environmental impacts when control over land changes hands and the need to build inclusive forest conservation planning future peace accords, said David Wrathall, an associate professor at OSU and co-author of the paper.

“There is an environmental cost to peace that was not previously understood. This work identifies an incredible policy need, not just in Colombia but in other areas of the world affected by armed conflicts, such as the Congo or Liberia,” said Wrathall, a geographer in OSU’s College of Earth, Ocean and Atmospheric Sciences. “Inclusive conservation governance has to be included in peace plans. People who live in the forests during conflict have to be empowered to make decisions about conservation after peace.”

The conflict in Colombia dates back nearly 60 years. It finally came to an end in 2016 with an historic peace accord between the Colombian government and the Revolutionary Armed Forces of Colombia, known as FARC. But the peace accord had no strong mechanism for managing changes to land use and the environment.

Murillo-Sandoval, who earned his doctorate in geography from OSU’s College of Earth Ocean, and Atmospheric Sciences last year, grew up in Colombia and witnessed the transition from conflict to peace unfold. His research was motivated by a desire to understand how the last 30 years of conflict, peace negotiations and the post-conflict period had affected land use, particularly in the Andes-Amazon Transition Belt.

The Andes-Amazon Transition Belt, the region where the Andes Mountains transition to the Amazon basin, is a unique corridor of tropical rainforest rich in biodiversity. It is also a region that has been subject to extensive deforestation and fragmentation of the natural habitat.

Murillo-Sandoval used satellite imagery and sophisticated computer mapping and modeling techniques to create and compare annual land maps from 1988 to 2019. He focused on the most common types of land use: urban; agriculture; forest; grassland; secondary forest, which are areas where forests were cut and have regrown; and water. Because the maps had high spatial detail and a pixel size of 30 meters, the researchers were able to track changes for land parcels one hectare – about 10,000 meters - or larger.

“We are using the word ‘cause.’ It’s not just a correlation. We designed the study to test whether incidents of conflict within forests during the civil war caused deforestation after the peace agreement was signed,” Wrathall said. “We found that conflict itself causes deforestation.”

The land changes are likely due to slow implementation of conservation governance in the region; the emergence of illegal land markets by people with wealth and power; and illicit land uses such as illegal cattle ranching and, to a much smaller degree, coca farming.

“During the conflict, FARC acted as a government, likely providing some stability for the region’s land and also keeping people out of areas where conflict was occurring,” Wrathall said. “After the peace accord was reached, the forests were safer but also had little or no government oversight, creating an opportunity for a people with money and power to grab land.”

“Peace is not just for peace’s sake. It’s also a political and economic decision,” he said. “What we see is that peace creates an opportunity for the powerful to make decisions over land.”

One bright spot in the findings was an increase in secondary forests, which are areas of re-growth of forests following other uses of the land. That may be a result of land abandonment as people left farms for bigger cities following the end of the conflict, Murillo-Sandoval said.

“Forest recovery in the Amazon can occur very fast if the land is left alone,” he said. 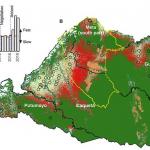