CORVALLIS, Ore. – Along with hydrangeas, sweet peas and roses, peonies pack a wallop of nostalgia, bringing to mind romantic gardens of old. It’s no wonder their popularity continues to grow.

Joyce Heinke was bitten by the peony bug 40 years ago and now has 58 plants on 1 acre and more coming along all the time.

“I buy two or three a year,” said Heinke, an Oregon State University Extension Service Master Gardener since 2012. “I’m running out of space to put them. Each year the plants get bigger and bigger. The oldest ones are huge, yard-wide bushes covered with beautiful, beautiful flowers.”

Most of Heinke’s peonies are the herbaceous type that die to the ground in winter, but she’s also planted tree peonies and intersectional – or Itoh – peonies that are a cross between the two. The Itoh peonies, bred in Japan in the 1940s by Toichi Itoh, weren’t available in the United States until the last 25 years or so after American breeders got a hold of them. Even now they can be tough to find and can take a chunk out of your wallet. But they’re worth it, according to Heinke, who describes them as having finer foliage than herbaceous, more like a tree peony.

Both Itoh and tree peonies have very large, full flowers and come in shades not available in herbaceous ones and have sturdy stems so they don’t have to be staked. Herbaceous, on the other hand, come in many forms, including single, semi-double, bomb, or Japanese, which are Heinke’s favorite.

Native to China and the European coasts of the Mediterranean Sea, peonies need a snap of cold to do their best and are hardy down to Zone 3. Above Zone 8 they’ll struggle without the chill in winter. These long-lived plants can survive up to 100 years. To keep them happy, it doesn’t take much work, according to Heinke. They prefer to be left alone, but if a bush stops producing flowers, it could be time to divide it. After division, don’t expect flowers for a few years. To divide, cut the plant down to the ground in the fall, dig it up, wash off the tubers and use a knife to separate them, leaving three to five eyes on each tuber.

Plant peony tubers that have been ordered online in fall at least a couple of weeks after working organic material into the soil so it can settle, Heinke said. Build up the soil before it rains, but don’t make it too fluffy or the tubers will sink. Dig a hole large enough so roots can be spread out, but not too deep that the eyes of the tuber will be deeper than 2 inches. Otherwise, they won’t bloom, Heinke said. Don’t plant in the same spot other peonies have been growing unless you dig out some of the old soil and replace it with compost. Potted peonies can be planted any time they’re available, but fall is still optimal.

Planting near a tree or other large established plants is not a good idea. Their roots will compete for water and nutrients and provide too much shade. Peonies like to be planted in full sun, but will take a bit of shade.

There’s no need to fertilize when planting, but use a tomato or iris fertilizer with the numbers 5-10-10 on the label or bulb fertilizer in spring as they are coming out of the ground and again halfway through the season, Heinke advised.

Though they like good drainage, peonies also want a fair amount of water, especially when it’s hot. “They’ll let you know by starting to go limp,” she said. “It’s pretty easy to tell.”

When peonies die back in winter, be sure to cut herbaceous and Itoh peonies to the ground and clean up the debris. Good sanitation is essential, Heinke said, to keep diseases at bay. Not that disease or pests are a big problem, though botrytis blight can be disappointing when buds get a fuzzy gray mold, turn black and never open. During wet springs, it can spread so be sure to clean up infected buds and leaves. Usually, this blight attacks the center of the plant where there is less air circulating so keep it opened up. If the problem is overwhelming, you can spray with a fungicide labeled for botrytis. Otherwise, good sanitation and planting peonies far enough apart to keep adequate circulation will do a respectable job at preventing diseases.

You’ll often see ants on peony buds and get upset that they are eating your plant. No worries. The ants are feeding on a sweet secretion the plant releases. In exchange, they eat insects that may be feeding on your plant, which is relatively rare.

Peonies provide beautiful bouquets and will last a long time in the vase. Heinke suggested taking a bucket out to the garden with you and getting the stems in water as soon as possible. Then cut the stems under water and immediately put them into a vase.

“Peonies are pretty darn healthy and they’re beautiful for most of the year,” Heinke said. “Who wouldn’t want them in their garden?” 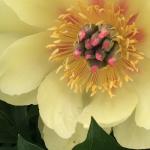