CORVALLIS, Ore. –With their sweetly scented flowers and sweet-tart flavor, Meyer lemons are a no-brainer for container gardening in the Northwest

Even though they are not cold hardy in any but the warmest climates (Zone 9-10), Meyer lemons have many fans. Actually a cross between a lemon and a mandarin orange, Meyers are sweeter than regular lemons and prized by cooks and bakers.

Other citrus that come in dwarf forms can also be grown in containers, but Meyer lemons are by far the most popular, according to Weston Miller, horticulturist for Oregon State University Extension Service.  They’re also the easiest to find at nurseries and through mail order.

When choosing a pot for your plant, lean toward larger rather than smaller, but keep in mind you’ll be dragging it and out of the house or greenhouse. Miller suggests starting with a 5-gallon container and then repotting up to first a 15- and then a 25-gallon pot as it grows.

The most important factor to growing Meyer lemons – or any citrus – is to bring them inside when danger of frost looms, usually around Halloween. In spring, aim for mid-April to take them out again. You don’t want big temperature variations for your tree, Miller said, so spend a few days hardening it off by taking it out during the day and returning it to its indoor spot at night. Keep the tree in shade for the first week, but remember citrus need full sun to bloom and fruit.

Inside, place near a bright window with six to eight hours of sunlight. A south-facing window will usually provide that. A temperature of 65 degrees at night is best. Don’t locate it near a vent; they don’t like hot air blowing on them. Always give your tree a bath before bringing it inside for winter to help prevent pests.

Meyer lemons, which grow in the 3- to 4-foot range in containers, are self-fertile so don’t need another tree for pollination. However, they do need insects or wind to move that pollen around so if you keep your tree inside too long, you’ll likely get fewer fruits. Hand pollination is an option. Just use a small paint brush and run it over each flower.

The tree won’t need much pruning, but it’s a good idea to cut out dead or crossing branches, Miller said. If the foliage is inhibiting air circulation, thin out the center of the tree a bit.

Meyers don’t like to have too much or too little water. In summer when your tree is outside, water once a day. Let the water drain through so that the roots don’t sit in water. Give it less irrigation in winter. Stick your finger in up to the second knuckle; if it’s dry you’ll want to water.

Fertilize in summer with a citrus fertilizer or one labeled for rhododendrons and blueberries. All three like acidic soil. Check the label for amounts. Cut back or discontinue feeding during winter.

People are distraught when they see flower, fruit or leaf drop. That can be a function of too little or not enough water; too cool nights; or too great of temperature variations. Meyers are usually disease free, but there are three pests that plague it: scale, aphids and spider mites. Aphids are the easiest to control by washing them off with soapy water and a spray from the hose. For spider mites, look for a houseplant insecticide that is labeled for food crops. Always follow the instructions.

Scale is more problematic because their clam-shell coverings make it difficult to get to them with any sort of control method. If you catch it early, crush them with your fingers, wash them with soapy water, rinse it and take off the top soil. Once they get established, it’s a more difficult proposition. You can try rubbing alcohol, but you have to reach every insect. During spring when they are in the crawling stage, spray with soap spray. However, many people discard their plant at that point and start over. 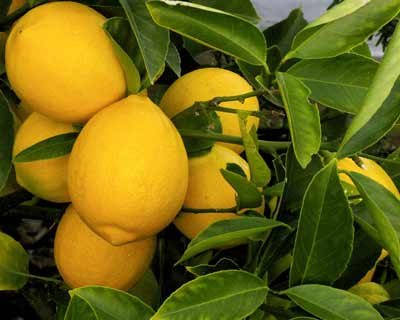