NEWPORT, Ore. – After more than three years of rest in the Yaquina Bay in Newport, the skeleton of a 78-foot blue whale was brought back to dry land this week so it can be preserved and prepared for a public display.

With the help of a team of technical divers from the Oregon Coast Aquarium in the water and a Forslund Crane operation crew on the dock near the Hatfield Marine Science Center, the whale’s 6,500-pound skull, 18-foot mandibles and several large net bags full of vertebrae and other bones were hoisted out of the water Thursday.

In fact, until the 2015 event, there hadn’t been a documented case of a blue whale beached in Oregon since Lewis and Clark made their historic journey to the coast more than 200 years ago. They saw Native Americans salvaging edible parts from a blue whale, Mate said.

Researchers from the Marine Mammal Institute saw the carcass as an opportunity for study and public education. After examining and dismantling the carcass, including removing about 58 tons of flesh, researchers bundled the skeleton in huge nets and submerged them in Yaquina Bay, weighing them down and allowing nature to run its course by having scavengers clean the bones. They were in the water for more than three years.

An anonymous donor last year provided a gift of $125,000 to the Oregon State University Foundation to help pay for the next phase of the preservation: retrieval and cleaning of the bones.

“It is just a wonderful gift from someone whose generosity will benefit generations of Oregonians who they likely will never meet,” Mate said. “A blue whale skeleton is a marvel to behold – and now many, many people will have that opportunity because of this gift.”

On Thursday, Jim Lewis of Hatfield Marine Science Center oversaw crane and diver coordination; the dive team was led by Jim Burke of the Oregon Coast Aquarium during the day-long operation.

“There are 365 bones in all. Some are small. Some, like the mandibles, are huge,” Mate said.

The bones will be transported to a warehouse where researchers and volunteers can begin the exhaustive process of cleaning them. Mate now is looking for volunteers from Lincoln County or nearby who are willing to help with cleaning the bones, including removing the oil and fat, which will ensure they last for decades.

“We’ve got a bunch of work to do to get everything cleaned up,” Mate said. “It’s critical to get the oil out of the bones to help preserve the skeleton and keep it from becoming rancid.”

Mate has some expertise in the process. He oversaw the graduate student preservation project of a 30-foot minke whale some 40 years ago. It is hanging outside of the Guin Library at the Hatfield Marine Science Center. “It’s holding up very well,” Mate noted.

Additional funding likely will be needed to complete the display. Mate also could use donations of large vats or troughs that can hold pieces of bone while they are being processed. Those interested in volunteering or providing funding or supplies should contact Mate at bruce.mate@oregonstate.edu.

Once the bones are ready, the skeleton will be reassembled and go on display at the new marine studies building under construction at the Hatfield Marine Science Center. Mate said he expects the process of cleaning, preserving and putting the blue whale skeleton on display to take about a year. 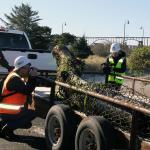 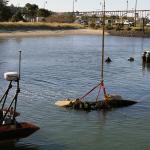 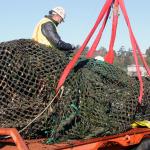 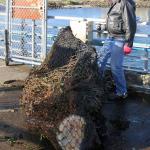