CORVALLIS, Ore. – The coastal marten, a small but fierce forest predator, is at a high risk for extinction in Oregon and northern California in the next 30 years due to threats from human activities, according to a new study.

The study, published today in the online journal PeerJ, will be available to federal and state wildlife agencies for their consideration to determine whether distinct geographic population segments of the coastal marten warrant state or federal listing as threatened or endangered, said Katie Moriarty, a certified wildlife biologist and lead co-author on the study.

“Martens are like the river otters of the woods,” Moriarty said. “But they can be vicious little critters, too. When you capture one and it’s growling at you from inside a cage, there is no mistaking its intent. They’re the size of kittens and act like they’ll attack a pit bull.”

Some threats to coastal martens include trapping and being hit by cars, said Moriarty, an Oregon State University graduate now with the U.S. Department of Agriculture Forest Service Pacific Northwest Research Station. Martens are trapped for their fur throughout Oregon with no bag limit.

Martens are rare in the coastal forests of Oregon and northern California. A different subspecies of martens thrives in the high elevation forests within the Cascade mountains. Martens resemble a cross between a fox and a mink, with bushy tails and large paws with partially retractable claws.

Coastal martens were petitioned for listing under the U.S. Endangered Species Act in 2010, but withdrawn for consideration by the fish and wildlife service in 2015. Last year, the U.S. District Court for Northern California denied the withdrawal, and the fish and wildlife service is now collecting information on marten populations for a decision to be made in October.

“This marten population is now so small that it is in imminent danger of extinction, which would leave martens without a source population to recolonize the central and northern coast of Oregon,” said Taal Levi, a professor of wildlife biology in the Department of Fisheries and Wildlife in OSU’s College of Agricultural Sciences and a co-author on the study.

Martens once ranged throughout coastal forests throughout Oregon to the northern California wine country. Extensive surveys revealed that the coastal marten population is now restricted to two populations, one in southern Oregon and Northern California, and another small population in the Oregon Dunes National Recreation Area, west of U.S. Highway 101 in central Oregon.

To determine how many martens are in the Oregon Dunes, the researchers live-trapped and attached radio collars to 10 adult martens (six females, four males) and set 31 remotely triggered cameras in the study area that could identify unique patterns on collars. Statistical models were then used to estimate the number of martens based on the frequency in which uniquely marked martens were seen on camera.

Their population assessment revealed that the central Oregon population of coastal martens is likely fewer than 87 adults divided into two subpopulations separated by the Umpqua River. Using a population viability analysis, they concluded that the extinction risk for a subpopulation of 30 martens ranged from 32 percent to 99 percent.

In the short term, limiting human-caused deaths of the coastal martens would have the greatest impact on the animal’s survival, said Moriarty, who has studied the animals for several years. In the long term, the species requires more habitat, which perhaps could be accomplished by making the adjacent federal land in Siuslaw National Forest suitable for martens. 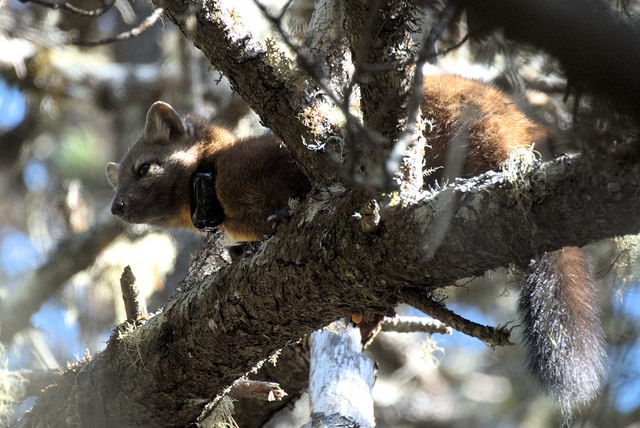