Research on how cells respond to stimuli offers insight into disease mechanisms, treatment

A study by researchers in OSU’s College of Science and Carlson College of Veterinary shows that the duration of the stimuli plays a big role in the connectivity of cells’ communication networks.

Scientists at the University of Pittsburgh also collaborated on the research into what biophysicists refer to as multicellular chemosensing, which is still somewhat shrouded in mystery despite its importance in biological processes, the researchers note.

“We are still far from fully understanding how the information networks are regulated by either external stimulation or cell identities,” said Guanyu Li, a doctoral student in the College of Science. “So that is what our paper was trying to investigate.”

The extracellular environment – essentially the fluid that surrounds cells – contains many kinds of chemicals, Li explains. Under certain pathological or physiological conditions, the chemical composition changes and triggers a signaling process that leads cells to create responses necessary for maintaining normal function.

Coordinated responses among a group of cells are made possible by cells exchanging molecules with their nearest neighbors, Li said. The exchanges let cells sense and respond to environmental changes in a more reliable way than if they were sensing and responding individually, and they allow multicellular organisms – people, animals, etc. – to survive in complicated surroundings.

“For example, when you are doing a cardio workout, cells need energy, which will lead to aerobic metabolism for creating a lot of ATP, an energy molecule,” he said. “When you’re thirsty, your body will generate ADH – antidiuretic hormone – to promote water reabsorption so you will not dehydrate. All these changes in chemicals are like signals trying to alert the body about what is happening. The receivers of those signals are individual cells.”

By capturing, or binding, the chemical molecules with receptors on the cell membrane, cells can determine what’s going on and trigger the appropriate processes. The catch, though, is that not every cell has the same ability to bind with those molecules.

“So in any multicellular organism, the coordinated sensing and responding within a group of communicating cells is really important,” Li said.

In the study, scientists used statistical analysis to determine cells’ relationship with their closest neighbors, then ran experiments to see the stimulating chemicals’ effect on the cells and the networks.

Li, OSU Honors College undergraduate Alia Starman and associate professor of biophysics Bo Sun stimulated brain cells known as neurons with ATP, an energy molecule found in all forms of life. In their experiments, they varied both the amount of ATP in the extracellular environment and how long the neurons were exposed to it.

They also experimented with tamping down on cell communication speed with a monounsaturated fatty acid, palmitoleic acid, and boosting it via potassium chloride, a metal halide salt.

The findings shed some light on how the networks are regulated, opening the door to the possibility of controlling multicellular response – and combating disease – via the right kind of stimulation in the extracellular environment, the researchers said.

The study also showed the collective power of even a comparatively small group of cells, Sun added.

“When hearing beats of music, watching the turn signal of the car in front of you or counting waves on the beach, our brains sense the periodicity and predict when the next event in the sequence will happen,” he said. “But does this function require the full power of the brain? Can a minimal system, as simple as a layer of neural cells, sense periodic input? We showed this is possible, and that neural cells do so by forming and organizing a communication network based on signal recurrence.”

Findings were published in the Proceedings of the National Academy of Sciences. 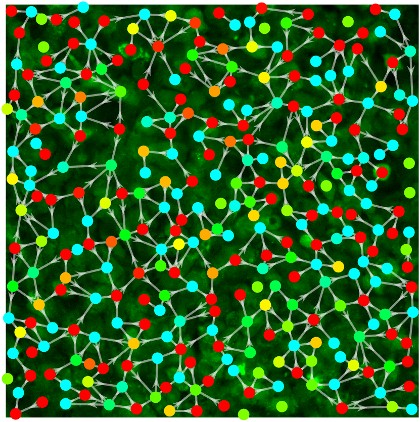