CORVALLIS, Ore. – Biological control of the brown marmorated stink bug, an invasive pest that devastates gardens and crops, would be more effective in natural areas bordering crops or at times when certain insecticides aren’t being applied, according to a new Oregon State University study.

The study, published in the Journal of Economic Entomology, advances the understanding of using the samurai wasp for biological control of the brown marmorated stink bug, and has significant implications for Oregon’s growers of orchard fruits and nuts, said David Lowenstein, a postdoctoral research associate in Oregon State’s College of Agricultural Sciences and lead author on the study.

Biological control is the use of beneficial insects to manage other insects, which means using less pesticides. The brown marmorated stink bug, which is native to east Asia, has a taste for more than 100 types of crops, including blueberries, wine grapes, cherries and hazelnuts. During the 1990s, it invaded the United States and is now found in 44 states, causing millions of dollars in crop damage.

With funding from the United States Department of Agriculture’s Specialty Crop Research Initiative, more than 50 researchers across the U.S. are studying the stink bug to find management solutions, including those at Oregon State.

The stink bug was first detected in Oregon in 2004. Since then, OSU researchers have found the pest in 24 of Oregon’s 36 counties, and in all of the state’s major fruit-producing regions. The bug also causes nuisance issues when aggregating on the side of homes and sheds in the fall.

The samurai wasp, which is smaller than a pinhead, is native to the same region in east Asia as the brown marmorated stink bug. It lays its eggs inside stink bug eggs, preventing the stink bugs from hatching. Although it is unknown how it arrived in the U.S., surveys conducted in 2014-15 detected the wasp in several locations. It was discovered in Oregon’s Willamette Valley in 2016.

Oregon State study investigated the impacts of different insecticides, commonly used in orchard crops, on samurai wasp survival and reproduction. Some insecticides were highly lethal to the wasp and a few were compatible with using the wasp for biological control.

Lowenstein said the research was necessary for growers, especially those in Oregon’s hazelnut industry, who use insecticides but who also want to use the samurai wasp to control stink bugs. They want to know which insecticides will be less harmful to the wasp and when to spray, Lowenstein said.

“Since the discovery of the samurai wasp in Oregon, our research group at OSU has proposed biocontrol for managing the brown marmorated stink bug,” Lowenstein said. “We needed to validate the compatibility of this wasp in a commercial environment where insecticides are being used.”

The researchers studied samurai wasp compatibility with nine conventional and organic insecticides commonly used in integrated pest management in perennial crops, both in the laboratory and in three hazelnut orchards in the Willamette Valley.

They found that the active ingredients in two classes of insecticides – neonicotinoids and pyrethroids – killed more samurai wasps than the others, both in the field and in the lab. Both classes are “broad-spectrum” insecticides, which are designed to kill or manage a variety of insects.

However, more than 50% of wasps survived contact with insecticides that are better targeted to control chewing insects, such as filbertworm larvae, in hazelnut.

“For someone who wants biological control for samurai wasp, it’s best to time it when you aren’t applying chemicals unless you are using those more targeted compounds,” Lowenstein said.

Orchards may also benefit from biological control if samurai wasps are released in unsprayed areas adjacent to agriculture and in urban areas, where the samurai wasp is thriving. In the last 2½ years OSU has released the wasp at about 60 sites in the state. At about 40% of those sites the wasp has survived into the following season.

The wasp isn’t commercially available and OSU rears it primarily for research, but the insects can be distributed to an Oregon location upon request, Lowenstein said, adding that the samurai wasp isn’t harmful to people.

“There’s no way you are going to confuse this with a yellowjacket. They aren’t interested in stinging people,” he said. “If you have a samurai wasp on your property you won’t even know it’s there unless you are seeing its effect, which is less stink bugs.”

Oregon State hosts a website with the latest news about the brown marmorated stink bug, photos to help identify it, and instructions on how to report sightings. A fact sheet about the samurai wasp is available through the OSU Extension Service.

Nik Wiman, OSU Extension orchard crops specialist at the North Willamette Research and Extension Center (NWREC) in Aurora and Lowenstein’s advisor, is a co-author on the study. Other co-authors are Heather Andrews, an OSU faculty research assistant; and OSU horticulture graduate student Anthony Mugica, both members of the OSU orchards research lab.

The study was funded by the Oregon Hazelnut Commission, the Oregon Raspberry and Blackberry Commission and the United States Department of Agriculture National Institute of Food and Agriculture 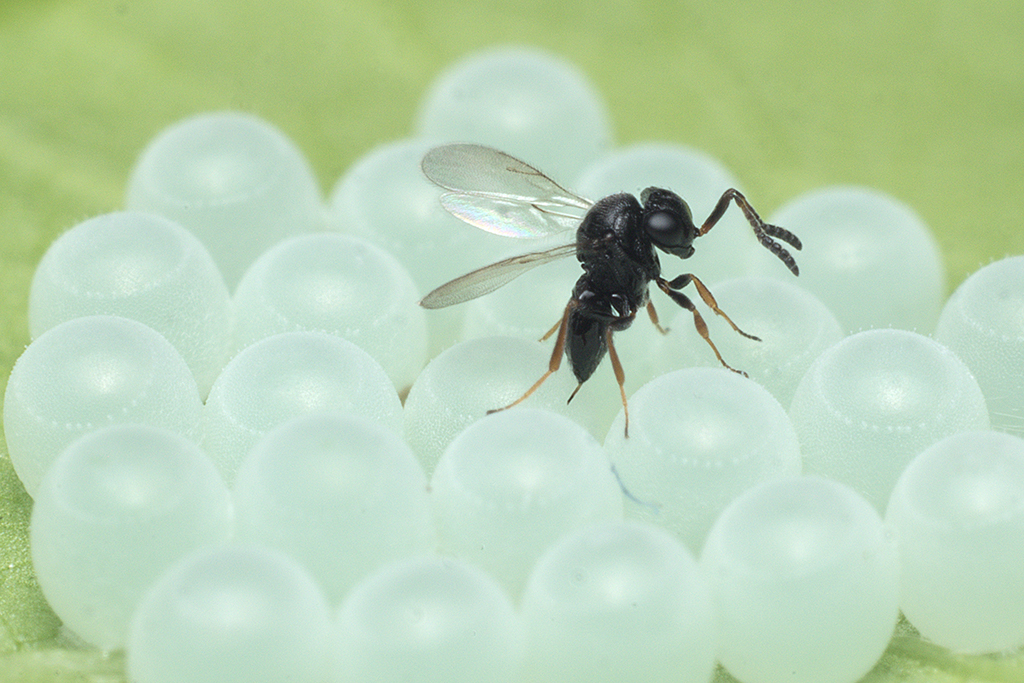