The distribution and abundance of greater and Gunnison sage grouse species has steadily declined in the region over the last century. Conservation of the birds prompted research led by the Oregon State University Extension Service to determine whether hunting affects the birds’ population.

Jonathan Dinkins, Extension assistant professor in the OSU College of Agricultural Sciences, collaborated with Jeff Beck, a professor at the University of Wyoming to review the history of greater and Gunnison sage grouse populations and hunting regulations in 11 western U.S. states and two Canadian provinces from the late 1800s to the modern day.

The research revealed a variety of outcomes. The results are presented in two articles published by PLOS One, a journal published by the Public Library of Science.

“Hunting is a potential factor contributing to population declines of sage grouse but has been difficult to fully assess,” said Dinkins. “As a result, wildlife agencies throughout western North America set increasingly more conservative harvest regulations over the past 25 years to reduce or eliminate the numbers of harvested greater sage grouse and Gunnison sage grouse.”

To survive, sage grouse need expansive and contiguous habitat dominated by sagebrush with an understory of native grasses and wildflowers. Many factors contribute to the birds’ decline, including wildfires, disease, drought, conifer encroachment, invasive annual grasses and human development like oil and gas development, wind turbines and housing construction. Hunting.is also a consideration.

The decline throughout the bird’s habitat has ebbed and flowed since the 1800s when millions of the chicken-sized birds were harvested by hunters. As the country moved into the 20th century and state management agencies were formed, a variety of regulations – including closure to hunting – were put into place to avoid over harvesting. Even so, sage grouse populations fluctuated and by the 1980s-1990s, decline was serious enough that the bird was considered for protection under the Endangered Species Act.

“Understanding the effects of human hunting on wildlife populations is necessary under any management scenario, but especially critical when managing declining populations or species of conservation interest,” said Dinkins, who studied potential hunting effects on sage grouse as a post-doctoral researcher at the University of Wyoming before coming to OSU in 2016.

In their research, the scientists studied 22 relatively distinct population segments and compared counts to find the impact of hunting restrictions on the birds. Some populations went down, while others went up and some remained stable, Dinkins said. Other environmental pressures had to be taken into account, he said.

“Our results suggest that discontinuing hunting in the largest population in central Idaho with a study designed specifically to evaluate hunting effects on sage grouse resulted in greater population growth rates,” Dinkins said. “However, this was not consistently the case for smaller populations. To no surprise, not all sage grouse populations were influenced by the same environmental change or human disturbance factors.” 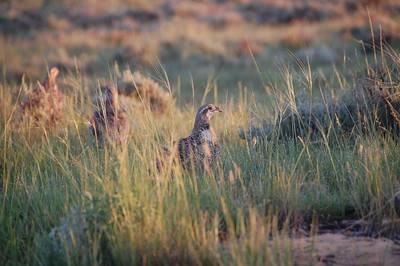