CORVALLIS, Ore. – A groundbreaking study of more than two dozen rescued dogs, some aggressive and some not, showed a clear link between aggressive behavior and the microbes that live in the dogs’ guts.

The findings, published today in PeerJ, stop short of saying the composition of a dog’s gut microbiome causes aggressiveness, or vice-versa – only that there are statistical associations between how an animal acts and the microbes it hosts.

Still, the work by Oregon State University researchers represents an important step toward more effectively dealing with a canine behavioral disorder that daily puts both animals and people at risk of injury or even death.

“In terms of how microbes potentially influence dog behavior, this lays the foundation for how aggression and gut microorganisms may be connected,” said lead author Nicole Kirchoff, a graduate student in microbiology in the OSU College of Science. “To our knowledge no other study has looked at the relationship between dog aggressiveness and gut microbes.”

Domesticated dogs have lived with humans for more than 14,000 years, are among the most popular companion animals and forge strong bonds with both people and other animals.

But aggressive behavior nevertheless remains a common problem and in many cases leads to animals being euthanized.

“Aggression is really stigmatized,” said study co-author Monique Udell, an animal behavior researcher in the OSU College of Agricultural Sciences. “It tends to get viewed as a shortcoming of the individual animal. But it’s important to look at aggression and other behavioral syndromes in terms of physiology as well. Maybe there are underlying physiological causes we can address, or if not, maybe there are behavioral predictors with physiological implications.”

The study involved 31 “pit bull type dogs,” 14 males and 17 females, who were living at a temporary shelter after having been rescued from a dogfighting operation.

Upon reaching the shelter, and prior to the start of the research, each dog was put through a series of tests by an animal welfare agency and categorized as aggressive or non-aggressive.

Animal welfare workers also collected a fecal specimen from each animal so the scientists could analyze the dogs’ gut bacteria.

Firmicutes, Fusobacteria, Bacteroidetes and Proteobacteria were the dominant phyla among all stool samples, but their abundance differed significantly between aggressive and non-aggressive animals.

Other microbiome differences between aggressive and non-aggressive dogs were observed at the operational taxonomic unit, or OTU, level; an OTU classifies groups of closely related organisms.

Seven OTUs differed significantly between dogs that were aggressive and those that were not aggressive: four from the genus Dorea, two from Lactobacillus and one from Turicibacter.

Also among the findings: Nine clades within the Bacteroides genus were elevated in the gut microbiomes of the non-aggressive dogs, and 25 clades from Lactobacillus were relatively abundant in aggressive animals; a clade is a group of organisms thought to have descended from a common ancestor.

“We’re finding associations between types of organisms in the gut and aspects of vertebrate physiology we wouldn’t have hypothesized about prior to the emergence of microbiome research over the last couple of years,” said co-author Thomas Sharpton, a microbiology and statistics researcher in OSU’s College of Science. “The gut-brain axis, the reciprocal communication between the enteric nervous system and mood or behavior, is a rapidly growing and exciting body of research.

“We didn’t show a cause-and-effect relationship between microbiome and aggression, but we showed they’re correlated, that there’s a linkage,” Sharpton said. “Maybe there’s a microbiome component that contributes to aggressiveness, but we need follow-up experimentation to determine if there is a causative role.” 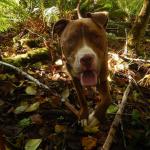 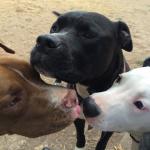 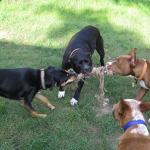