CORVALLIS, Ore. – Tapping into 35 years of satellite imagery, researchers at Oregon State University have dramatically enlarged the database regarding how climate change is affecting kelps, near-shore seaweeds that provide food and shelter for fish and protect coastlines from wave damage.

And the Landsat pictures paved the way to some surprising findings: A summer of warm water isn’t automatically bad news for kelps, and large winter waves aren’t either.

The study was published in Ecology.

“Kelps are fundamentally cold-water species, thus climate change is a problem for them, and worldwide we’re losing a lot of them,” said the study’s corresponding author, Sara Hamilton, a marine biologist pursuing her Ph.D. at OSU. “We’re beginning to see evidence of that happening here on the Pacific coast of North America, especially Northern California.”

The Landsat program is a joint effort of NASA and the U.S. Geological Survey that has been collecting Earth surface data since 1975 but only recently has been used for kelp monitoring.

The OSU research was the first to use Landsat data to study bull kelp, large seaweeds that grow in “forests” that form canopies in shallow ocean water. There are about 30 genera of them, and while they look like plants, they’re actually heterokonts, related to algae.

“Taking technology from other fields and bringing it into the marine sciences to improve our work is really exciting,” Hamilton said. “A 35-year dataset in marine biology is really hard to find. It’s usually hard to do marine work – it’s expensive, you need highly trained divers, and it’s dangerous. But we need long-term data to understand climate change and how it impacts populations. This was an exponential increase in the amount of information available about kelp forests in Oregon.”

In 2014, a marine heat wave led to a boom in purple sea urchins whose grazing has been pummeling populations of Nereocystis luetkeana, commonly known as bull kelp, off the Northern California shore ever since.

“But we actually didn’t find evidence of loss in bull kelp populations post-2014 in Oregon even though we are right across the border,” Hamilton said. “Our findings challenge the picture that’s been making the rounds in the news and points to the need for more research, because we really don’t understand kelp very well.”

Off the Oregon coast, most kelp grows in the southern one-third of the state, the majority of it spread among five distinct reefs.

Kelp data teased from decades of Landsat imagery show that canopy area can vary dramatically from year to year, and that long-term population trends vary from reef to reef. One reef, the Rogue, near Gold Beach, showed a greater population in 2018, the last year of the analysis, than at any point in the last 35 years.

“For the years we surveyed, three of the five reefs remained within historically normal population levels,” Hamilton said. “Another one has had low populations for the past 15 years, and the fifth has shifted to somewhat smaller, less variable populations over the last two decades.”

Past, extensive research on a perennial kelp species, Macrocystis pyrifera, has suggested that high waves in winter have a negative impact on kelp population, but the current study suggested the opposite for bull kelp, an annual.

“An association between bigger waves and more kelp is 100 percent outside the basic idea of what influences kelp,” Hamilton said. “Our study shows that if you change one species, change one geographic area, you get a whole new set of factors emerging.”

Hamilton takes pains to point out that while kelp forests can be dazzlingly beautiful, that’s not the main reason marine biologists are interested in them.

“People should have access to basic environmental resources that are important to them, and we need to know how these resources are changing and how those changes impact people, often vulnerable people,” Hamilton added.

Kirsten Grorud-Colvert and Bruce Menge in the OSU College of Science collaborated on this study, as did James Watson of the OSU College of Earth, Ocean, and Atmospheric Sciences and Tom Bell of the University of California, Santa Barbara. 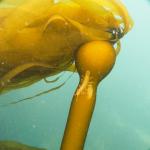 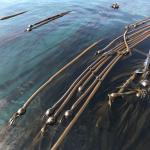