CORVALLIS, Ore. – Scientists have published a novel method for counting Pacific salmon – analyzing DNA from the slime the fish leave behind in their spawning streams.

The study, funded by The National Geographic Society, is published in the journal Molecular Ecology Resources.

“When we analyzed the environmental DNA sloughed into water from salmon tissues including mucus and skin cells, we got very accurate counts,” said Taal Levi, an ecologist at Oregon State University and lead author on the study. “This is a major first step for more informed salmon management decisions because it opens up the possibility to affordably monitor many more streams than the few that are currently monitored.”

Pacific salmon are a keystone resource in the Pacific Northwest, with an economic impact of well over $500 million each year in Alaska alone. Currently, spawning salmon are counted at just a few streams due to the reliance on human counters, or in rare cases, sonar. Five species of Pacific salmon – pink, chum, sockeye, coho, and chinook – are distributed through more than 6,000 streams in southeast Alaska alone. More than 1,000 of those streams host spawning salmon.

Salmon are anadromous: They migrate from home streams to the ocean as juveniles, and return a few years later as adults to spawn. Anadromous fish such as salmon provide a straightforward scenario for testing whether environmental DNA (eDNA) can be used to count fish, because large numbers of salmon release their DNA as they pass a fixed sampling point, either as they swim up a river or stream as inbound adults or swim downstream as outbound juveniles.

In many rivers and streams, including the majority of freshwater systems in Alaska, adult salmon returning to spawn are poorly monitored, as are fry and smolt production resulting from spawning salmon.

For the study, researchers collected water samples in 2015 and 2016 near the Auke Creek research weir, nearly 16 kilometers north of Juneau. Weirs consist of a series of closely spaced bars across an entire stream to prevent the passage of salmon, except through a single, narrow gate over which a human observer tallies and identifies salmon as they file through.

The Auke Creek weir, cooperatively operated by the National Marine Fisheries Service, in collaboration with the University of Alaska and the Alaska Department of Fish and Game, is known as one of the most accurate fish counters in the world, Levi said.

From those samples they passed 1 liter of water through simple filters to collect DNA floating in the water, and then quantified the amount of sockeye and coho salmon DNA present on each filter at Levi’s OSU lab. Because the concentration of eDNA in stream water results from both the amount of DNA shed by fish and the flow of water, the product of eDNA concentration and streamflow can be used to calculate absolute quantities of eDNA, Levi said.

Once they amplified the eDNA, the researchers compared those figures with the daily census of sockeye and coho salmon carried out at the Auke Creek research weir, to determine whether the eDNA accurately predicted the number and species of fish that passed through the weir.

“We take extracted DNA and we quantify the amount of DNA that belongs to coho salmon or sockeye salmon. The counts derived from eDNA were remarkably similar both for returning adult salmon and out-migrating juveniles” Levi said.

“Using just one variable – stream flow – combined with the amount of DNA that derived from coho and sockeye salmon – our statistical model did a good job of predicting all the peaks of eDNA, giving us an idea of when, and how many, fish passed through,” Levi said. “Now we can get a lot of information from many streams. Having a lot of information that isn’t 100 percent accurate may be better for management decisions than having really accurate counts for only four of 6,000 streams, particularly since we have very little data from anywhere on the number of out-migrating juveniles produced by each salmon stream.”

Using eDNA to count salmon could help agencies save money. The annual cost of a weir is approximately $80,000, not including installation or major maintenance. The cost of each water sample analysis, as used in this research, is $35.

This spring, the researchers plan to test OSU-developed automatic water samplers in a dozen streams in southeastern Alaska.

Levi is an assistant professor in OSU’s Department of Fisheries and Wildlife in the College of Agricultural Sciences. Chunyan Yang of the Kunming Institute of Zoology Chinese Academy of Sciences was a co-corresponding author on the study.

The research team also included Jennifer Allen, a faculty research assistant in the Department of Fisheries and Wildlife at Oregon State; Donovan Bell, John Joyce, Joshua Russell and Scott Vulstek of the National Oceanic and Atmospheric Administration (NOAA) Auke Bay Laboratories; David Tallmon, of the University of Alaska Southeast; and Douglas Yu of the Chinese Academy of Sciences and University of East Anglia. 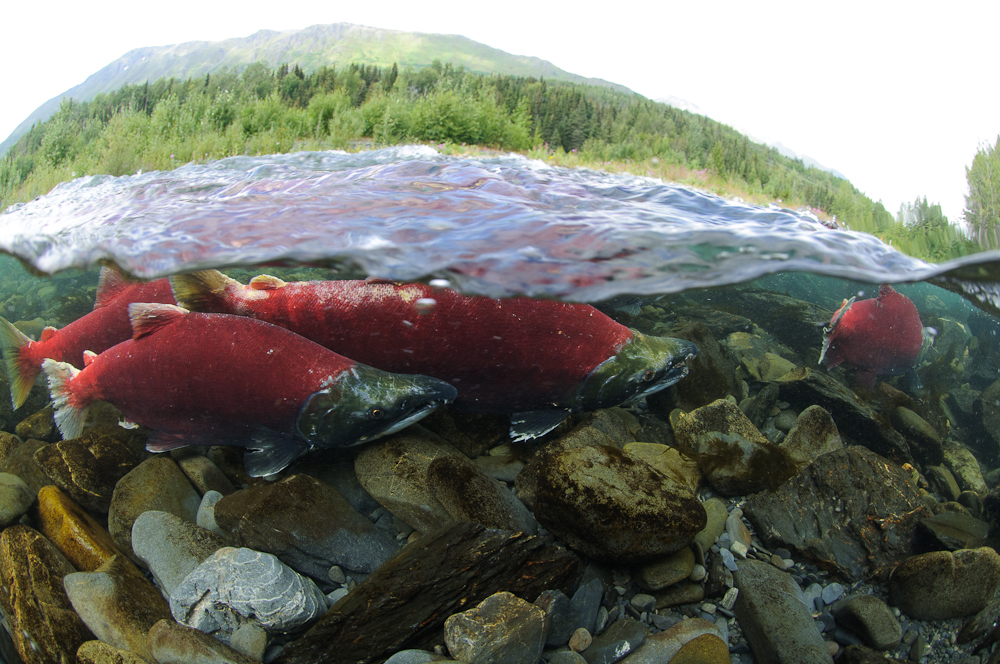