CORVALLIS, Ore. – Student smokers who appeared to be more dependent on nicotine were more likely to violate Oregon State University’s ban on smoking after the policy was adopted, new research has found.

“Across the U.S., university smoke-free policies have been very popular and generally effective, but 100 percent enforcement is often a challenge,” said Marc Braverman, a professor and Extension specialist in the College of Public Health and Human Sciences at OSU and the study’s lead author.

“This is the first study that looks at the characteristics of smokers who violate a smoke-free policy. That’s important information for colleges and universities as they implement and enforce smoke- and tobacco-free policies.”

Several of the statistical findings in the research suggest that a general level of dependence on nicotine is the most important factor driving policy violations, Braverman said.

“One implication is that universities need to devote more resources to helping people quit tobacco use,” he said.

“We know that addiction is a progressive process,” Braverman said. “If people continue to smoke, they are likely to become addicted. A smoke-free policy can help break the cycle of addiction because it can disrupt people’s smoking habits and hopefully prevents them from transitioning into regular users.”

Researchers evaluated the 2012 policy implementation because the lessons learned by OSU leaders can inform decision-making at the university and at other college campuses across the U.S.

In spring 2013, after almost a full academic year with the policy in place, the researchers invited all students, staff and faculty at OSU’s Corvallis campus to take a web-based survey. More than 5,600 students and 2,000 faculty and staff members responded.

The current study focused on about 1,100 student survey participants who had reported use of cigarettes, other combustible tobacco products or electronic cigarettes within the last month.

In addition, those students who had used nicotine replacement products – either gum or patches – were also more likely to violate the policy.

A revised policy would also extend to all OSU properties, including OSU-Cascades, OSU’s new Portland Center, the Hatfield Marine Science Center in Newport and county Extension offices, in addition to the Corvallis campus.

“We want to really focus on the health and wellness of our university community as we move forward with the new policy,” said Marion Ceraso, an associate professor of practice who is leading the Tobacco Policy Task Force with Braverman. “We need more visible promotion of the policy and easily available cessation resources for everyone who wants to quit and needs support.”

Campus officials have observed that many instances of policy violation are due to people who are visiting campus, including fans attending sporting events or workers on campus for a contracted project. Campus visitors may not be aware of the policy or the campus boundaries within which it applies.

As part of the policy review and update, the researchers plan to conduct a new survey of faculty, staff and students on the Corvallis campus this fall to get a better sense of how the smoke-free policy is working now that it’s been in place for several years and to gauge the campus community’s opinions about revising it.

“Generally what researchers find is that these kinds of policies tend to get more popular over time,” Braverman said. “After a policy is implemented, people begin to accept it and appreciate its effect. The norm changes tend to take hold quickly.”

For more information about OSU’s smoke-free policy and the effort to expand the policy to 100 percent smoke-free and tobacco-free, visit: https://health.oregonstate.edu/tobacco-free/faq. 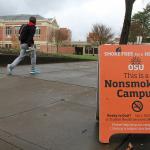