CORVALLIS, Ore. – The experimental extreme draining of a reservoir in Oregon to aid downstream migration of juvenile chinook salmon is showing benefits but also a mix of unintended consequences, including changing the aquatic food web and releasing potential predators downstream.

The impact is on the entire river system is uncertain, the researchers say, but the effects for juvenile salmon are twofold. First, it helps their migration downstream; and second, it may reduce predation on the next class of incoming juvenile salmon the following summer.

For the past several years, engineers have lowered Fall Creek Reservoir in the Willamette River basin to its original riverbed during the fall to help juvenile spring chinook salmon out of the reservoir for their downstream migration. A team of researchers from Oregon State University and the U.S. Forest Service Pacific Northwest Research Station then looked at the remaining fish, vegetation, invertebrate populations, nutrients and oxygen levels to see the effects of the one-week draining period.

What they found surprised them. Native rainbow trout and invasive largemouth bass that remained in the reservoir after draining had switched their diets from fish to invertebrates when the reservoir refilled the following summer.

“When the reservoir transitions into a river for a week, it helps the young salmon move downstream, but it likely also flushes other small fish – and adults – downstream as well,” said Christina Murphy, an OSU doctoral student in fisheries and wildlife and lead author on the study. “On one hand, it seems that can be great for juvenile salmon, because their predators are hunting zooplankton instead of them. On the other hand, we aren’t yet sure on the long-term effects of this treatment on the reservoir community.”

Results of the study were published today in the journal PLOS ONE.

The unusual decline in “trophic levels” of aquatic top predators has rarely been documented outside of a laboratory setting, the researchers noted. For the bass and trout that remained in the reservoir, switching their diet from fish to zooplankton is less advantageous, Murphy said.

“You get more bang for your buck in a caloric sense from fish than zooplankton,” she said. “However, the trout and bass we analyzed certainly weren’t starving.”

A comparison of fish populations between 2006 – before the draining of Fall Creek Reservoir began – and 2017 found that the number of salmon in the reservoir appeared roughly the same, trout were hard to evaluate because of stocking, and the number of bass had declined significantly.

Returning adult spring chinook are captured below the dam at Fall Creek and trucked above it, where they are released to spawn. The juvenile salmon stay in the reservoir for several months, and begin migrating downstream in the fall. The Army Corps of Engineers releases the water from the reservoir to assist their migration.

“It is a novel life history,” Ivan Arismendi, an assistant professor in the Department of Fisheries and Wildlife  in OSU’s College of Agricultural Sciences and co-author on the study.

“Most people don’t realize that juvenile salmon can spend time in a reservoir rather than the streams, yet we know little about how to manage them in that setting. The young salmon who live in  reservoirs are over twice the size of those in streams. If juveniles can double their size, it greatly increases their chance for survival – both during migration and in the ocean.”

Sherri Johnson, research ecologist with the U.S. Forest Service Pacific Northwest Research Station, said, “our study investigates new questions about fisheries management and reservoirs."We are exploring how reservoirs might be managed to minimize negative impacts for salmon and water quality while still fulfilling the functions for which these reservoirs were designed.”

Murphy said, “It’s all about priorities and tradeoffs. “You can decide to minimize the warm-water fish coming out of the dams, but then you’re not providing any help for the juvenile salmon migrating downstream. When you drain the reservoir, you’re not only sending juvenile salmon downstream, but bass, trout, bluegill, bullheads and other fish. 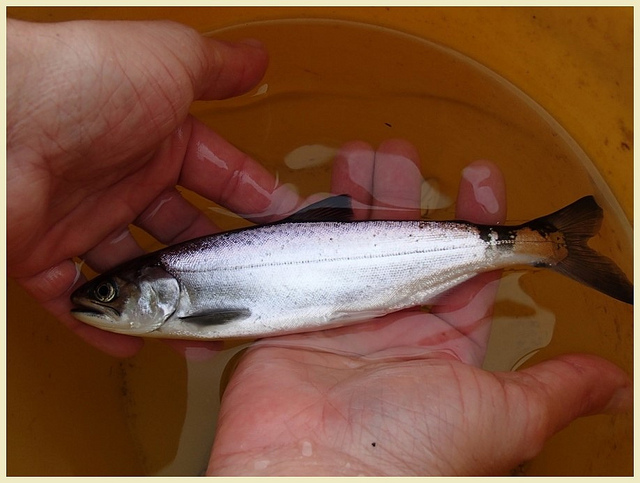