CORVALLIS, Ore. – Savvy Northwest anglers have long known that when patches of warm Pacific Ocean water drift closer to shore each summer, it’s time to chase after the feisty and tasty albacore tuna.

Now a new study confirms that tuna are more likely to be found in regions of the California Current System with certain oceanographic conditions – and that commercial fishermen who work those areas more frequently bring in up to three times the revenue of other tuna anglers.

Results of the study, which was supported by the National Science Foundation and led by Oregon State University, were published today in the journal Frontiers in Marine Science.

These oceanographic conditions are more complex than simply being warmer temperatures, said James Watson, an OSU marine ecologist and lead author on the study. Their technical name is Lagrangian Coherent Structures, though scientists often refer to them as “the skeletons of the sea.”

“Essentially they are physical ocean fronts where surface waters converge,” Watson said. “If you toss two tennis balls in the water and they converge quickly, it is considered a Lagrangian Coherent Structure, or LCS.”

“What we’ve found is that the stronger the convergence, the more likely it is to attract certain things, beginning with the aggregation of phytoplankton, which in turn attracts larger organisms like tuna – and, ultimately, tuna fishermen.”

The researchers sought to discover whether anglers were utilizing these LCSs and if so, whether it had an economic impact. They compiled data from a vessel monitoring system on the location of more than 1,000 fishing vessels every hour in the U.S. California Current Large Marine Ecosystem for a four-year period – a total of more than 340,000 trips. They then collected fisheries catch and price data.

They focused on three industries – albacore tuna, which has roughly $35 million in annual revenue for the West Coast; chinook and coho salmon, $45 million annually; and pink shrimp, $50 million in revenue.

They then used regional ocean modeling of the West Coast of the United States to identify LCSs, and compared these fronts to fishing activity and success.

“What we found was that tuna fishermen off our own coast could expect to make three times more revenue per trip if fishing occurs on strong Lagrangian Coherent Structures,” Watson said. “The same did not apply to the other species. The pink shrimp are a benthic, or deeper water organism, so surface fronts did not affect them as much – at least, on a relevant time scale. They may benefit over the long-term by having nutrients and phytoplankton eventually sink to the bottom.

“We also could not see any correlation between LCSs and salmon,” he added. “Our model is more of a broad-scale look at ocean conditions and salmon are located closer to shore, where conditions are more influenced by smaller frontal features and the effect of rivers and headlands.”

Unfortunately for fishermen, there is not an easy way to identify these areas of strong convergence by satellite, Watson said, though experienced seafarers can sometimes locate them by thermal and chlorophyll maps, or visual cues, including a long stretch of turbulent water filled with organisms. In addition to fish, these LSC regions often attract baleen whales and certain seabirds.

Eventually, Watson said, researchers may be able to help fishermen key on them ahead of time, which would lessen time at sea and thus fuel costs and risk. “In addition to this new information, it’s also vital to have strong management policies to ensure the sustainability of the fisheries,” he said. 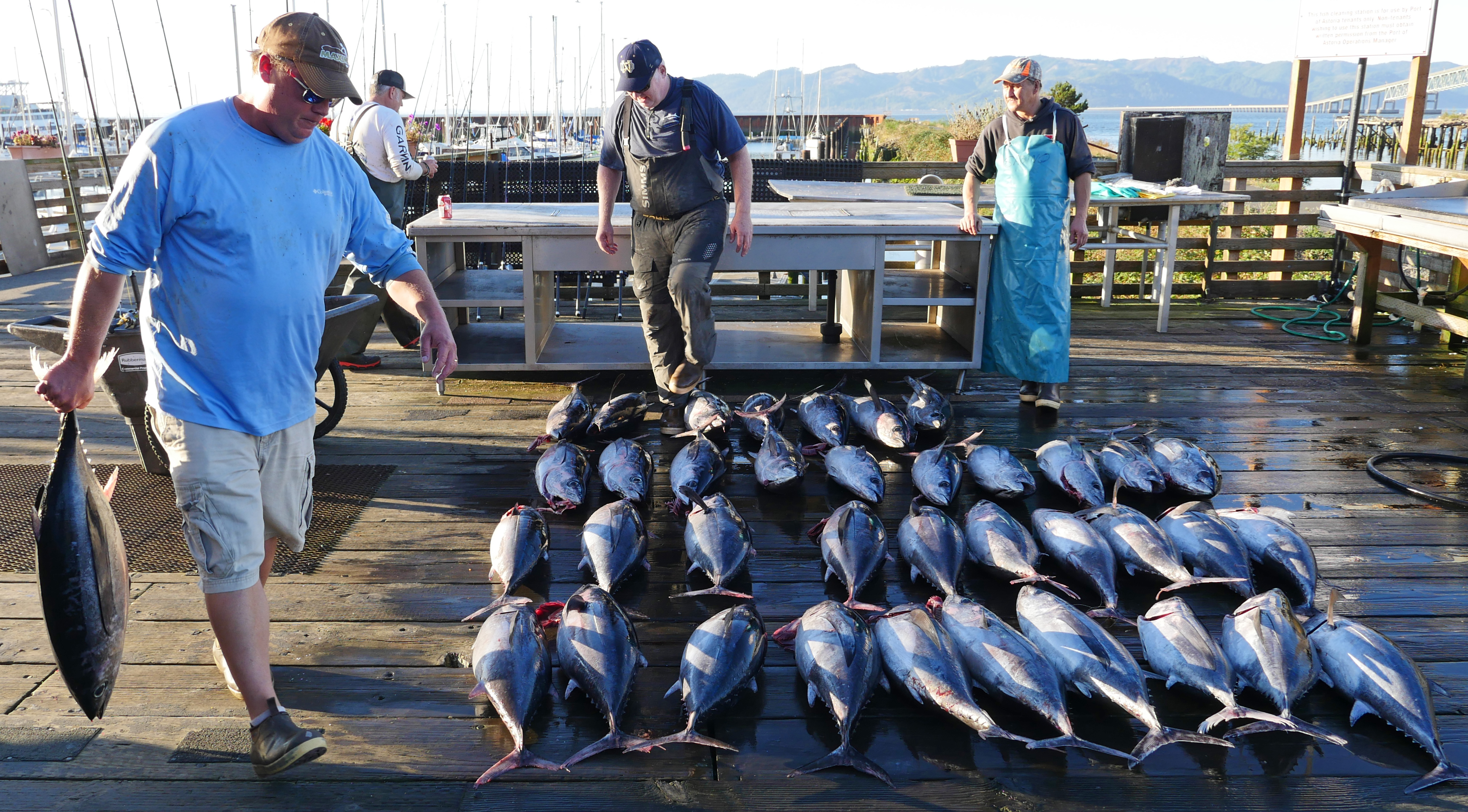 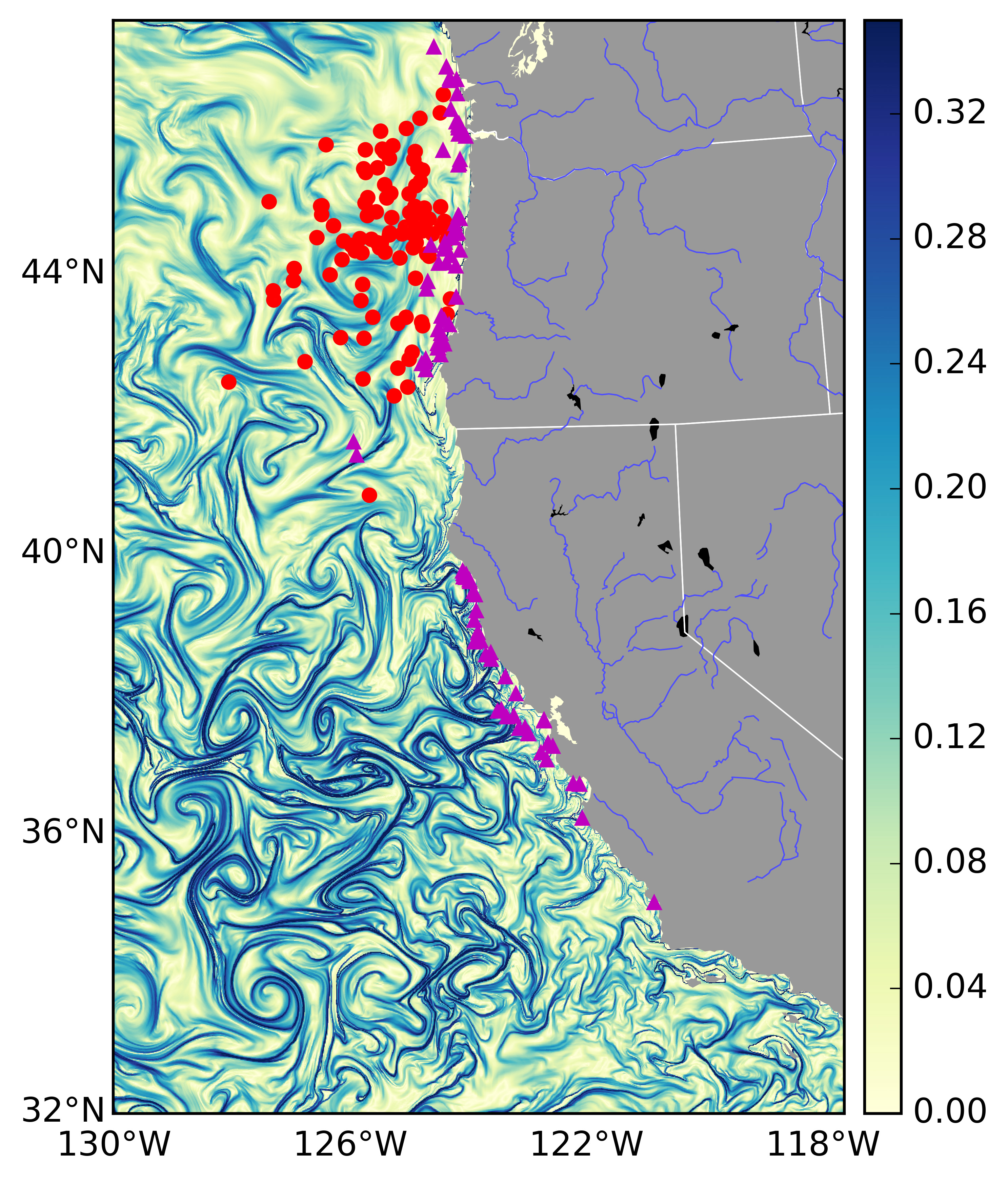