NEWPORT, Ore. – Scientists are discovering that gray whales do a lot of crazy things they didn’t know about, including performing headstands, swimming upside down, and playing their own version of “tag” between feeding episodes.

They even apparently engage in some bawdy behavior now and then.

These newly documented behaviors have resulted from the use of small “unmanned aerial systems,” or drones, that allow researchers to observe the whales from above with minimal disturbance. The results of the research, led by Oregon State University scientists, are being reported this week in the journal Frontiers in Marine Science.

“Initially we began using drones to observe the whales’ physical conditions,” said Leigh Torres, a principal investigator with the Marine Mammal Institute at OSU’s Hatfield Marine Science Institute and lead author on the study. “But soon we discovered that the drones can also provide us with amazing new insights into the whales’ behavior – without disturbing them in the process.”

The researchers compiled and tabulated all the different behaviors they observed from the drone video. A highlight video of the five “coolest gray whale behaviors” can also be viewed at: https://bit.ly/2wNPXFt.

Torres said the drones improve researchers’ ability to observe whale behavior significantly over boat-based observations because of the vertical angle looking through the water column and their ability to track them for longer periods of time – especially in clear water. In their study, they studied gray whale behavior at 53 sightings over a six-month period from both a boat and a drone, and the drones provided three times as much “observational capacity.”

“Even though we have a research permit to approach the whales with a drone, we found that we could record some great footage from a farther distance in order to get the context of the whale – like its habitat and other whales in the area,” Torres said.

Now, about those findings.

“We only see maybe 10 percent of a whale’s life while it is at the surface,” Torres said. “With the drone, we can observe for much longer periods and detect new behaviors, such as what we are calling ‘headstands,’ where the whale is poking its head and mouth into reefs, crevices and substrates to feed.

“Surprisingly, we also have recorded the whales swimming on their sides and ‘jaw-snapping’ at prey, or even swimming upside-down. We are not sure why a whale would swim upside-down for three minutes, but one hypothesis is that it helps them focus better with their eyes. The whales also plow through the substrate scooping up mouthfuls of amphipods and other zooplankton prey. We can see them straining the mud out of their baleen at the surface.”

The drone footage also suggests to researchers that gray whales are more social on their feeding grounds than they previously believed.

“The paradigm is that baleen whales, including grays, are very compartmentalized and keep their feeding and breeding grounds separate,” Torres said. “We anticipated the whales to be generally solitary during the feeding months, but with the drones we were able to observe some brief but rather interesting social activities.

“As the whales moved around their feeding grounds they would coordinate behaviors, including feeding efforts, and intentionally touch one another and bump up against other whales. They even appeared to practice copulation.”

The Torres-led research team is in its third year of studying whales using drones, and with every research expedition, they learn more and more about these hard-to-study marine mammals.

“We’ve been focusing primarily on gray and blue whales, but you could apply the technology to almost any marine megafauna, including sharks, turtles, dolphins and other whales,” Torres said. “Most large marine animals move quickly and they are unpredictable. But with a drone, you can see down into the water column if it is clear enough and really get an insight into how they live their lives.” 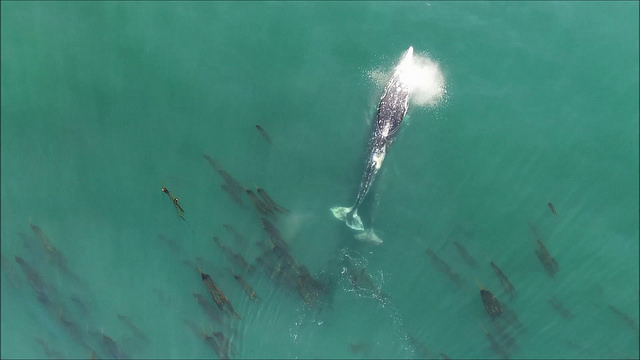