NEWPORT, Ore. – Feeding at the ocean’s surface appears to play an important role in New Zealand blue whales’ foraging strategy, allowing them to optimize their energy use, Oregon State University researchers suggest in a new study.

Blue whales are the largest mammals on Earth. Because of their enormous size, the whales must carefully balance the energy gained through their food intake with the energetic costs of feeding, such as diving, holding their breath or opening their mouths, which slows their movement in the water. Adding to the challenge: their prey are tiny krill and they must find and eat large volumes of them to make any energetic headway.

“People think about whales having to dive deep to get to the densest prey patches, but if they can find their prey in shallow waters, it’s actually more energetically profitable to feed near the surface,” said Leigh Torres, an assistant professor and director of the Geospatial Ecology of Marine Megafauna Laboratory at OSU’s Marine Mammal Institute. “In this population of whales in New Zealand, they foraged more in areas where their prey was dense and shallow.

“Their dives were relatively short, and they were feeding more at the surface, which requires less energy.”

The findings were published today in the journal PeerJ. Co-authors of the study include Dawn Barlow, a doctoral student in Torres’ lab; Todd Chandler, who captured drone footage used in the study; and Jonathan Burnett of OSU’s Aerial Information Systems Laboratory.

Much of what researchers know about blue whale foraging comes from tags placed on whales, which can record travel and diving patterns, including acceleration, or lunging, toward patches of food. But surface feeding is not as well understood, in part because it is harder to analyze tag data and quantify the size of prey patches at the water’s surface, Barlow said.

During a field research trip to study blue whales off the coast of New Zealand in 2017, Torres and her team observed surface feeding from their boat on multiple occasions. They also noted that the density of krill patches was greater closer to the water’s surface.

The researchers collected data that showed blue whales had relatively short dive times overall, about 2.5 minutes, compared to other blue whale populations, such as those off the coast of California, which average dives of about 10 minutes. When surface foraging was observed, the dive time of New Zealand blue whales dropped even more, to 1.75 minutes.

Using a drone, the researchers captured video of a blue whale surface feeding on a patch of krill. The footage illustrates a blue whale’s feeding process, including decision-making about whether or not to eat patches of krill near the ocean’s surface. The video, which was first shared publicly shortly after the research trip, went viral online. It also gave researchers another source of data to describe surface feeding behavior.

“The drone footage fills a gap in our understanding of surface feeding,” Barlow said.

Through the footage, the researchers were able to see how the whale used its right eye to target the prey. They were able to quantify the recognition distance from the whale to the prey and could measure how widely the whale opened its mouth to feed. The footage also showed the whale’s decision to rotate from one side to the other to better capture the krill.

“The video allows us to describe a lot of really cool kinematics and body movement coordination by the whale that we haven’t been able to see before,” Torres said.

“The footage also allowed us to see the prey response in new way. We can see when the krill begin to flee as the whale approaches, which is really amazing. At the whale’s fastest speed and acceleration, the krill begin to jump away just eight tenths of a second before the whale strikes at the krill patch.”

Though the researchers had surface feeding footage from just one whale, the footage included four encounters between that whale and surface prey patches, providing insight into decision-making processes by the whale in response to the size and orientation of the prey patches, Torres said.

“This footage highlights the value of using drones for study and observation of whales,” she said. “Drone footage could be a good complement to data collected from tags for studying surface behaviors of whales.” 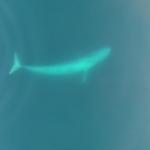 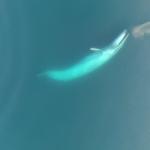