CORVALLIS, Ore. – Summer streamflow in industrial tree plantations harvested on 40- to 50-year rotations was 50% lower than in century-old forests, data from the long-term Alsea Watershed Study in the Oregon Coast Range showed.

The research, led by Oregon State University’s Catalina Segura, is an important step toward understanding how intensively managed plantations might influence water supplies originating in forests and downstream aquatic ecosystems, especially as the planet becomes warmer and drier.

“Industrial plantation forestry is expanding around the globe and that’s raising concerns about the long-term effects the plantations might be having on water, especially in dry years,” Segura said.

Findings were published in the Journal of Hydrology.

Running through southern Benton and Lincoln counties in Oregon, the Alsea River empties into the Pacific Ocean at Waldport and supports runs of chinook and coho salmon as well as steelhead and cutthroat trout.

The Alsea watershed has a rich research history dating back six decades; in the 1960s, it was the site of one of the first comprehensive studies of the effects of forest harvesting on water quality and fish habitat in the nation.

Those research results provided evidence for standards included in the landmark 1971 Oregon Forest Practices Act, among the first such laws in the United States to set rules to protect streams from the impacts of timber harvesting.

In the current study, Segura and collaborators looked at 27 years of streamflow data to compare the effects of historic and contemporary forestry practices on summer streamflow in three sites within the Alsea watershed: Flynn Creek, Deer Creek and Needle Branch.

Flynn Creek, 210 hectares in size, was designated a U.S. Forest Service Research Natural Area in 1975 and has been left undisturbed; 60% to 70% of its canopy is red alder and big-leaf maple, and the rest is Douglas-fir that regenerated following a 19th century fire.

Deer Creek is 311 hectares and has been historically used to study how road building and extensive forest management affect water quality. Three 25-hectare areas (25% of the total watershed area) in the Deer Creek watershed were clear-cut in 1966 (buffer areas near streams were left uncut). Over the last 30 years the watershed has been harvested again via intermittent thinning and clear-cutting.

Needle Branch, 75 hectares, has been used for examining how watersheds are affected by contemporary logging practices compared to historical practices – the 1960s and earlier. The entire watershed was clear-cut between 1956 and 1966. Eighty-two percent of that happened in 1966, with no trees left along the stream. It was 100% harvested again from 2009 to 2014 using contemporary methods, including retention of riparian vegetation near the stream.

Together, streamflow data from Needle Branch, Deer Creek and Flynn Creek enabled the scientists to determine forestry practices’ effects on how much water was flowing in the streams.

After the mature forests were harvested in 1966, streamflow increased for seven years, then began to decline as the Douglas-fir seedlings grew, eventually falling below pre-harvest streamflow levels.

Compared to mature forests, daily streamflow from 40- to 53-year-old plantations was 25% lower overall and 50% lower during summer months, when there is minimal precipitation in the Coast Range.

The harvesting of the plantations didn’t lead to much of an increase in streamflow. The likely reason: high evapotranspiration from replanted Douglas-firs and other rapidly regenerating vegetation, and from the vegetation in the riparian buffer.

Evapotranspiration is the sum of the water that reaches the atmosphere through evaporation and transpiration – the process that moves water throughout a plant from its roots to its leaves.

“Results of this study indicated that 40- to 50-year rotations of Douglas-fir plantations can produce persistent, large, summer low-flow deficits,” Segura said. “While the clear-cutting of these plantations, with retention of riparian buffers, increased daily streamflow slightly, streamflow did not return to where it was before the harvesting of those mature forests, which apparently do not use as much water.”

The findings, together with other regional studies, indicate that the magnitude of summer streamflow deficits is related to the proportion of watershed area in young (30- to 50-year-old) plantations, Segura said. Comparatively little is known, she added, about the specifics regarding how evapotranspiration levels change as a tree ages or how much it varies with changes in forest structure as the forest matures.

“We need to improve our understanding of tree water use at the stand or forest level and how that changes as forests age,” she said. “We also need to continue to maintain our long-term studies as much as we can. The only way we found out what we learned here is because we had the long-term data.”

The National Council for Air and Stream Improvement, the Oregon Forest and Industries Council, Plum Creek Timber Company (now Weyerhaeuser Company), the National Institute of Food and Agriculture, and the National Science Foundation supported this research. 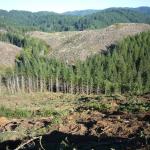