NEWPORT, Ore. – Preliminary results from door-to-door sampling by Oregon State University suggest that 3.4% of the Newport community had the novel coronavirus that causes COVID-19 on June 20-21.

The study, Team-based Rapid Assessment of Community-Level Coronavirus Epidemics, known as TRACE-COVID-19 for short, began in Corvallis the weekend of April 25-26.

In Newport, 30 two-person field teams canvased 30 neighborhoods, with 336 of the households visited, or 71%, agreeing to participate. In all, the field workers received samples from 569 people, and 13 tested positive for SARS-CoV-2, the virus that causes COVID-19.

“Our results indicate the virus is relatively prevalent in Newport,” said Ben Dalziel, assistant professor in the College of Science at OSU and co-director of the project. “We know this because previously undiagnosed infected individuals are present in a random sample of participating households across the city. This indicates the potential for significant further spread unless strong actions are taken to reverse the course of COVID-19 in Newport.”

“This kind of random sampling gives us a type of data we don’t have, and we will be working with OHA and OSU to understand how to incorporate this into the data tools we currently use,” said Lincoln County Commissioner Kaety Jacobson. “We will also be looking at the feasibility and cost of doing further sampling studies like this one.”

The TRACE study is a collaboration of the OSU colleges of Science, Agricultural Sciences, Engineering, Public Health and Human Sciences, and the Carlson College of Veterinary Medicine – in partnership with county health officials.

“We are grateful to the many Newport residents who were willing to participate in TRACE,” said Jeff Bethel, an associate professor in OSU’s College of Public Health and Human Sciences and a member of the TRACE leadership team. “The high participation rate gives us confidence that our findings are robust and a good indication of how widespread the virus causing COVID-19 is in the general population of Newport. Information about community prevalence of the virus adds to the information already gathered by health officials.”

The results mean that all residents should pay close attention to guidance provided by health officials, such as the statewide face-covering mandate that begins on Wednesday, said Javier Nieto, dean of OSU’s College of Public Health and Human Services and one of TRACE’s leaders.

“Other measures such as social distancing and avoiding large gatherings will also help slow the spread of the virus,” Nieto said. “It is particularly important that individuals who have symptoms or tested positive follow state and county health guidelines such as self-isolating and seeking medical care.”

The TRACE study originated in Corvallis and included four weekends of random neighborhood sampling. TRACE moved to include Bend on May 30-31 and then expanded to Newport three weeks later following the positive tests of more than 120 workers at Pacific Seafood, which operates five processing facilities in the city.

TRACE uses a statistical model based on the number of samples, the number of positive tests and prior information on the prevalence of the virus to estimate the proportion of the community that is infected during the period when the samples were collected.

“TRACE does two things,” Dalziel said. “First, we find and get help to participants who are infected but do not know they are, which reduces the chances of these folks unknowingly spreading the virus to other people. Second, we estimate how widespread the virus is in the general population, which informs public health strategies.”

The study was initially funded by OSU and a grant from the David and Lucile Packard Foundation, and has been aided by work from the OSU Foundation and the OSU Alumni Association. Funding from PacificSource Health Plans has allowed for the expansion to Bend and Newport, and additional sampling in Corvallis.

“The Newport TRACE data reinforces the continuing need for heightened care by all citizens to take precautionary actions – wearing face coverings and social distancing, even when among friends,” said Bob Cowen, director of the OSU Hatfield Marine Science Center.

At each home visited by TRACE field workers, members of the household are invited to participate in the study. Those who choose to take part are asked to provide information such as their name and date of birth; to fill out a simple consent form; and to answer a few confidential, health-related questions.

Participants are given a nasal-swab test kit that they administer to themselves inside their home and their minor children if they want them to take part. The field staff wait outside, and the participants leave the completed test kits outside their front door. Field staff maintain a safe distance at all times and do not enter anyone’s home.

The tests used in TRACE-COVID-19 collect material from the entrance of the nose and are more comfortable and less invasive than the tests that collect secretions from the throat and the back of the nose.

The field workers leave participants with information about the project and how they will receive their results – available in seven to 10 days – as well as health guidance from county health officials and the Centers for Disease Control and Prevention. Participants in the study are sent their results and those of their minor children by secure email with receipt by standard mail delivery as a backup. Everyone’s personal information is safeguarded.

COVID-19, first reported to the World Health Organization on Dec. 31, 2019, has been confirmed in more than 10 million people worldwide and has killed more than 503,000 people. In the United States, there have been more than 2.5 million reported cases – including more than 8,100 in Oregon – and more than 126,000 deaths nationwide. Lincoln County has had 300 confirmed cases and two deaths.

“The tally of cases already reported by health officials tells us how many people are known to be sick with COVID-19,” Bethel said. “This number is well understood to underestimate the actual number of infected individuals because it misses asymptomatic individuals and people who have not sought testing or do not have access to testing. In contrast, the TRACE estimate of prevalence tells us about the fraction of individuals in Newport who are infected – whether or not they have symptoms, and whether or not they have access to testing. Public health and elected officials need this kind of information to plan and deploy resources.”

In addition to TRACE sampling, other OSU researchers collected sewage samples from Newport’s wastewater system the same weekend. Those samples are still being analyzed.

The fourth and final weekend of TRACE sampling in Corvallis, originally scheduled for May 16-17, took place June 13-14 to help determine if the easing of stay-at-home orders leads to a jump in the prevalence of the virus in the Corvallis community. Those results are also pending.

The first three weeks of sampling in Corvallis each suggested a prevalence of between one and two cases per 1,000 people. 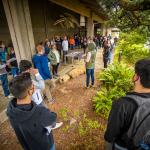 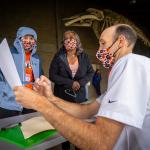