Many of science’s most significant challenges trace to the limits of known available materials, but a phenomenon named “counter-ion insertion” by OSU College of Science researchers opens the door to “a great number of new solids with values transcending different disciplines well beyond battery chemistries,” said Xiulei (David) Ji, associate professor of chemistry. “This is the beginning point of a whole new field.”

Researching ion-storage chemistry in solids – specifically, looking at anions rather than cations to store energy – Ji and Ph.D. student Heng Jiang tested the manganese oxide Mn3O4 as an electrode in a zinc ion battery.

The test of hosting zinc ions was unsuccessful but instead delivered an unprecedented chloride battery electrode, showing that anion-hosting batteries work better after cations are trapped in the electrodes.

“We expect this marks the inauguration of counter-ion insertion as a generic electrosynthesis methodology for materials design,” Ji said. “Battery discharge or charge processes can be powerful synthesis tools, and the process where an electrode fails to deliver desirable properties in one type of battery can be the exact electrosynthesis needed for creating an excellent electrode for another type of battery.”

There are many different types of batteries but they all work the same basic way and contain the same basic components: Two electrodes – the anode, from which electrons flow out into an external circuit, and the cathode, which acquires electrons from the external circuit – and the electrolyte, the chemical medium that separates the electrodes and allows the flow of ions between them.

“There are fewer known materials that can store anions reversibly than for storing cations,” Ji said. “As an example for cation storage, the reversible insertion of lithium ions led to the technology of lithium ion batteries.”

Reversible means the battery can be recharged, like the one in a cellphone.

Lithium ion batteries work well because the cation being stored is small and light. For anion storage, the desirable anions are halides – a single halogen atom with one extra electron. Iodine, bromine, chlorine, and fluorine are the halogens, and their anions are known as iodide, bromide, chloride and fluoride.

“Chloride is relatively light and small compared to other kinds of anions that have been tried, bulky polyatomic ions like nitrate, sulfate and hexafluorophosphate, which tend to gradually warp the electrode structures,” Ji said.

In this study, the Mn3O4 cathode reversibly stored chloride with great effectiveness after zinc cations (Zn2+) were trapped within the cathode’s chemical structure.

“The trapped cations transform Mn3O4 such that the reversible storage of the chloride becomes much more viable,” Ji said. “The zinc and chloride are counter-ions to each other, which causes favorable interactions leading to unprecedented properties in capacity, operation potential and cycling life. The anion-hosting cathode works with a zinc metal anode in a full-cell dual-ion battery with an aqueous electrolyte.”

Dual-ion batteries have both cations and anions involved in the battery’s electrochemical reduction-oxidation, or redox, reaction.

“We demonstrated this patent-pending battery chemistry in prototype pouch cells, which is close to commercialization,” he said. “Even more important, counter-ion insertion looks like a methodology with important electrosynthesis implications across the whole spectrum of materials science. The knowledge of counter-ion insertion will potentially grow exponentially over the next three to five years with many new materials to be invented.” 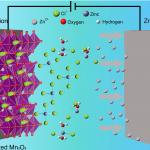