Scientists at Oregon State University and Utah State University studied 2,800 hectares of mixed-conifer forest in central Oregon, with many of the ponderosa pines in the study area dating back hundreds of years prior to 1910, when putting out wildfires became federal policy.

Other trees in the area, where fire history has been studied extensively, were younger, comparatively fire- and drought-intolerant grand firs.

The findings, published in Global Change Biology, indicate that as stands of trees became thicker over the past century, trees were forced to use progressively more of the heavier stable isotope of carbon for photosynthesis, indicative of increasing drought stress as they restricted the passage of gases into their leaves.

The research also suggests that rising carbon dioxide levels – atmospheric CO2 has increased 40 percent since the dawn of the industrial age – can’t help trees overcome the effects of forests having become more dense without fires.

“We wanted to document the trajectory of sensitivity to drought stress in response to progressively increasing fire deficits, and the threshold level of stand occupancy where decreasing resistance and resilience to drought stress, bark beetles and wildfire set in,” said study co-author Christopher Still of the OSU College of Forestry. “This was an intersection of fire ecology and physiological ecology – two areas that don’t meet up as often as they should.”

Before 1910, frequent low-severity surface fires played a key role in maintaining the forests of the dry mountain regions of the western United States. In the decades since, the fire deficits that resulted from federal policy – in concert with grazing, logging and land-use changes – have caused major structural shifts in older forests as shade-tolerant and fire-intolerant species have moved in.

Over the same period of time, concentrations of carbon dioxide in the atmosphere have not only been rising but doing so at an increasing rate[NS1] ; the higher CO2 concentrations have an effect on leaf gas exchange – the processes through which trees obtain oxygen for respiration and carbon dioxide for photosynthesis.

“We’ve known for a long time that fire suppression has led to crowded forests, which means more competition for resources,” said College of Forestry graduate student Andrew Merschel, another study co-author. “We’ve known that because of that, trees are more prone to drought, which makes sense – there’s less water reaching deep below ground and more trees pumping it out. Our research shows in a physiological way what’s happening. We thought there would be signals in the annual tree rings, and there are.”

A tree adds a ring for each year of growth, and in a conifer the ring consists of a lighter-colored “early wood” portion and a darker-colored “late wood” component.

Ring-size variation reflects temperature and precipitation at the time the growth occurred. And the chemistry of each ring tells a tale too, including whether a tree can use more of the lighter carbon-12 isotope it prefers, or had to resort to using relatively more of the heavier carbon-13 isotope for photosynthesis as well.

Tree-ring carbon isotope records also have shown that trees respond to drought by becoming more efficient with their water use.

What hadn’t been known, though, was whether increases in water-use efficiency, bolstered by rising CO2 concentrations, were enough to overcome increased drought stress resulting from a recent in-growth pulse of younger, fire-intolerant trees.

“Increased tree density seems to outweigh the benefits of carbon dioxide ‘fertilization,’” Merschel said. “It’s not necessarily bad if younger, drought-sensitive trees that established since fire exclusion die because that’s consistent with way these forests used to look – more open, allowing ponderosa pine to live to be 600 years old. Fewer trees and reduced competition allow the old, fire-resistant trees that have survived centuries of drought, insects, and fire to persist as the structural backbone of dry forests.”

Lead author Steven Voelker of Utah State University notes that drought sensitivity of forests in the dry mountain regions of the Pacific Northwest may be compounded as climate change increases the length of the snow-free season.

“Recent research from OSU and other institutions also shows that denser forests reduce snowpack across the Northwest,” Voelker said. “We cannot predict exactly how all of these factors affecting forests will interact in the future, but it is certain that lower-density forests will have more snow and less drought stress.”

And without “major changes to policy and management aimed at reducing stand densities,” many forests in central Oregon will cross a threshold that makes them less resistant to drought and less resilient to wildfires and bark beetle outbreaks, he said.

Future work by this research group will expand tree-ring isotope analyses into different areas of Oregon and other parts of the western United States to assess the effect of increased competition across conifer forests where it might be dryer and hotter – and thereby provide a more comprehensive view of how forest resilience has changed because of fire suppression.

The US Forest Service, Oregon State University and the Utah Agricultural Experiment Station supported this research. 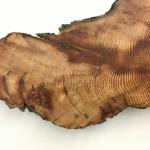 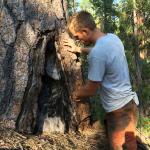 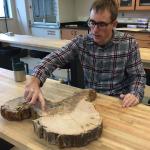