For university classrooms, are telepresence robots the next best thing to being there?

The findings are particularly important given the nationwide shift to online instruction caused by the COVID-19 pandemic, forcing many students who otherwise would be in classrooms and labs to pursue their education from a distance.

The National Science Foundation study led by Naomi Fitter of the OSU College of Engineering examined the experiences of university students attending classes in three formats: in person; through a telepresence robot; and via distance learning tools such as livestreaming, recorded lectures and calling into class with questions.

Findings were published in Robotics and Automation Letters.

The preferences of the 18 engineering students who were studied were split between distance learning tools, or DLTs, and attending in person. Instructors of the four courses in the study uniformly preferred teaching students in person.

But the instructors felt telepresence robots were preferable to distance learning tools for remote learning, and the students noted the robots’ ability to keep them more engaged, expressive and self-aware.

Even before the pandemic, Fitter notes, 14% of university students in the United States were pursuing degrees exclusively online, and another 15% were using distance learning technologies at least some of the time.

“Students engage in distance learning for many reasons,” she said. “There are fundamental challenges in distance learning, such as the need to find a way to train students in the time management and active listening skills typically developed during higher education. Distance learners are also susceptible to missing out on benefiting from their peers – effective social interaction while learning leads to better critical thinking and longer-term information retention.”

The user interface for the robots in the study included forward- and downward-facing camera views, zooming options, mouse- and keyboard-based robot driving, and menus for adjusting audiovisual elements.

“Past research has explored the use of telepresence robots in a wide variety of contexts including hospitals, offices, museums and professional conferences,” Fitter said.

Participants in the study, which also included researchers Nisha Raghunath and Christopher Sanchez of the OSU College of Liberal Arts, attended class via each assigned method for a two-week period. The courses were four medium-sized, upper-level engineering classes – machine learning, software architectures, analysis of algorithms, and computer systems organization – consisting mainly of traditional lectures in a classroom, with student participation encouraged.

“Participants generally used the robots to view the lecture, ask questions during the lecture, and move around during breaks to talk to friends or instructors,” Fitter said. “When asked to choose a single favorite method for attending class, nine participants chose in-person attendance, eight chose the DLT resources, and one chose the telepresence robot.”

In-person learning ranked higher than the other attendance methods in every aspect of a daily survey completed by participants except for ease of learning, in which it tied with distance learning technologies. In-person learning was described as more social and individually expressive compared to other learning methods, and feelings of presence and interaction abilities were also better in person.

“Not all students had realized the value of in-person learning before the study,” Fitter said. “Instructors uniformly preferred in-person attendance by students. But there were drawbacks to in-person learning too, such as ‘a person sits beside me and is always talking.’”

In their post-study interviews, student participants generally offered positive comments about the robots but noted imperfections like “there were times when I was not able to read from the screen properly” and “I wasn’t sure about my speaking volume.”

“If a telepresence robot doesn’t have sufficient camera quality, investing in other new features for it may be futile,” Fitter said.

Instructors for the most part appreciated being able to see students’ faces and nonverbal expressions while expressing a preference for remote students attending class using a telepresence robot.

“Despite reporting certain challenges, participants seemed to have overall positive experiences using the telepresence robots,” Fitter said. “Understanding how to use technologies to keep people connected will increase in importance in this world of increasingly spread-out families, teams and classes.” 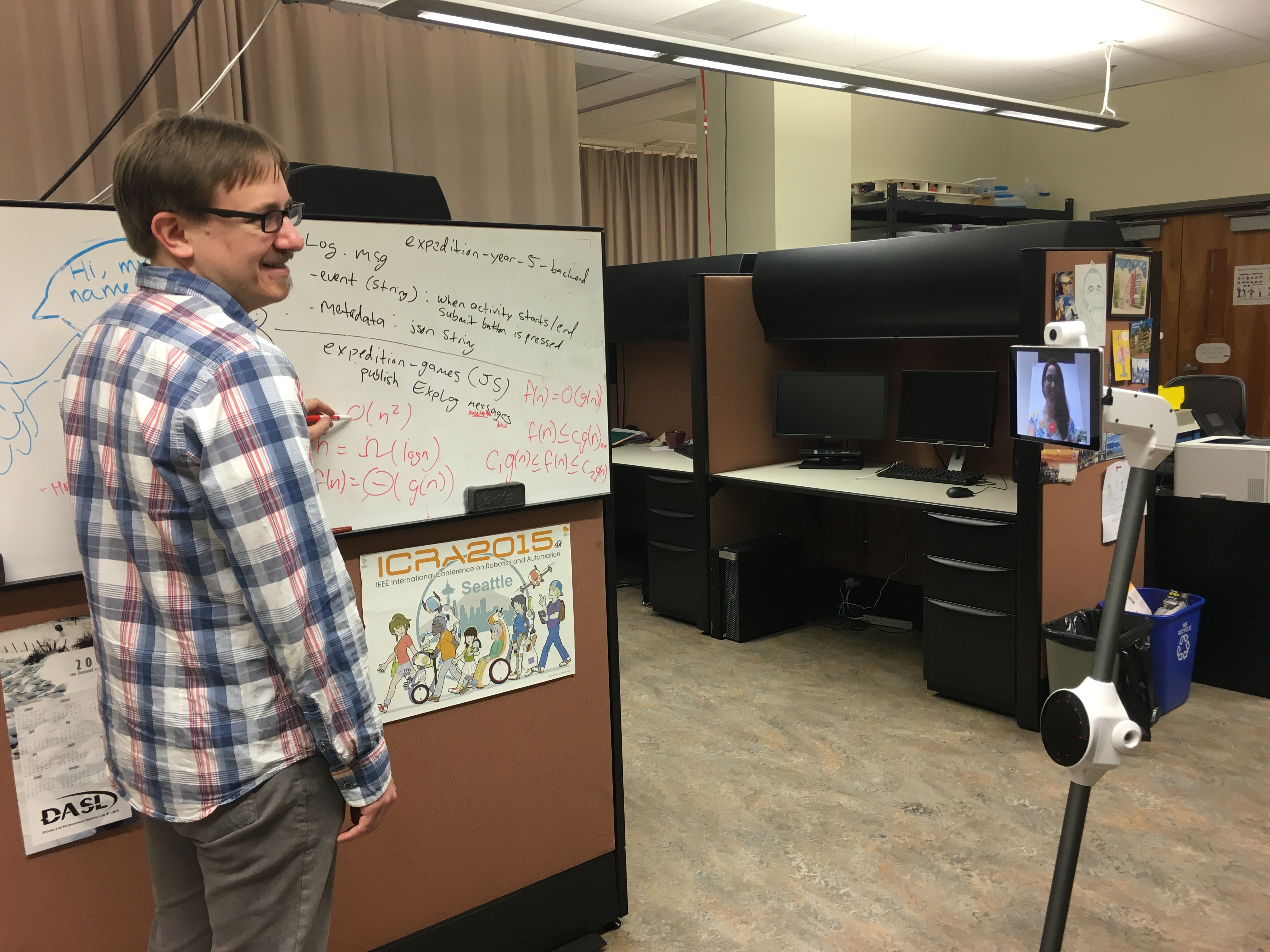