NEWPORT, Ore. – The environment in the Cordell Bank National Marine Sanctuary off the coast of San Francisco is not a refuge from the noise generated by ship traffic, the first underwater marine acoustic study of the region has shown.

Vessel and other human sound is not currently regulated in Cordell Bank National Marine Sanctuary, but sanctuary officials are trying to learn more about its impact on animals as part of efforts to evaluate and improve the management of the ecosystem.

Noise from human activity such as vessel traffic or offshore drilling can have an impact on the health of marine animals. For example, whales rely on sound to forage, communicate, navigate and avoid predators – processes that can be hindered by human-made noise.

“Noise levels we measured at some frequencies in the sanctuary were higher than those modeled for the Channel Islands National Marine Sanctuary near the Port of Los Angeles, which is considered the largest port in U.S. waters,” said Samara Haver, a doctoral candidate in the College of Agricultural Sciences at Oregon State University and the study’s lead author.

“That says a lot about the vessel activity going on around and in the Cordell Bank National Marine Sanctuary and how it is affecting the immediate environments.”

The sanctuary’s small size, close proximity to dense shipping lanes and exposure to deep-ocean areas where sound may travel farther could contribute to the sound environment, researchers said. The national marine sanctuary system has identified ocean noise as a priority issue.

Findings from the sound study were published recently in the Journal of the Acoustical Society of America. Co-authors include Robert Dziak, an acoustics scientist with the National Oceanic and Atmospheric Administration who holds a courtesy appointment in OSU’s College of Earth, Ocean, and Atmospheric Sciences and other researchers from OSU, NOAA, the National Park Service, Point Blue Conservation Science, Stanford University and the Monterey Bay Aquarium Research Institute.

Cordell Bank National Marine Sanctuary is located off the coast of northern California, with its southern-most boundary about 42 miles north of San Francisco. The sanctuary encompasses nearly 1,300 square miles. It is an extremely productive marine area centered on Cordell Bank, a rocky undersea feature several miles long and wide that sits at the edge of the continental shelf.

Cordell Bank is one of five national marine sanctuaries in the Pacific along the West Coast of the United States and one of three off the northern California coast near San Francisco.

Sanctuary regulations are designed to protect the integrity of the ecosystem. Ships are permitted to transit through the sanctuary but disturbing the seafloor and discharging material into the sanctuary are generally prohibited. Most large ships travel within what’s known as a “traffic separation scheme” – a highly-regulated shipping route system. Cordell Bank and the nearby Greater Farallones National Marine Sanctuary also request voluntary shipping slowdowns from May 1 to Nov. 15 to protect aggregations of whales.

“One of the sanctuary’s primary needs is to document the soundscape and to begin to understand how animals in the sanctuary may be affected by human-made sounds,” said Danielle Lipski, research coordinator at Cordell Bank National Marine Sanctuary. “This is an innovative way for us to learn new information about whales in the sanctuary using methods that complement the visual survey work we do.”

In October 2015, researchers deployed a long-term continuous underwater acoustic monitor in the sanctuary and recorded ambient sound for two years. Passive acoustic sound monitoring offers a low-impact, cost effective way to monitor the health of the marine environment and the effectiveness of marine conservation efforts.

“This initial study helps us establish a baseline to start understanding what is going on in that environment,” said Haver, who studies marine acoustics and works out of the Cooperative Institute for Marine Resources Studies, a partnership between OSU and NOAA at Hatfield Marine Science Center in Newport.

Among the researchers’ findings:

Understanding patterns of whale presence in the sanctuary environment is helpful for sanctuary managers. Data collected from the acoustic study can be used to inform management efforts such as speed reduction programs during peak periods for whales that could reduce ship strikes and whale entanglements, Haver said.

“When whales or other marine species are not surfacing, we cannot see them,” Haver said, “Acoustic monitoring gives us a way to track their movements when otherwise it would be impossible. We can supplement and verify visual data and that gathered through whale tagging.”

Haver also compared the sound levels at Cordell Bank National Marine Sanctuary to past research that modeled noise levels in the Channel Islands National Marine Sanctuary, which is near the Port of Los Angeles and high-traffic West Coast shipping lanes and found Cordell Bank to be noisier at some frequencies. Researchers also have measured noise levels in Channel Islands and other sanctuaries and plan to do additional noise comparisons in future work.

Scientists also are continuing to monitor sound in Cordell Bank and in the future will be able to compare data from different time periods to see what changes may be occurring in the marine environment. Researchers in the future hope to analyze changes in the marine environment as the COVID-19 pandemic set in and ship traffic was reduced, Dziak said. 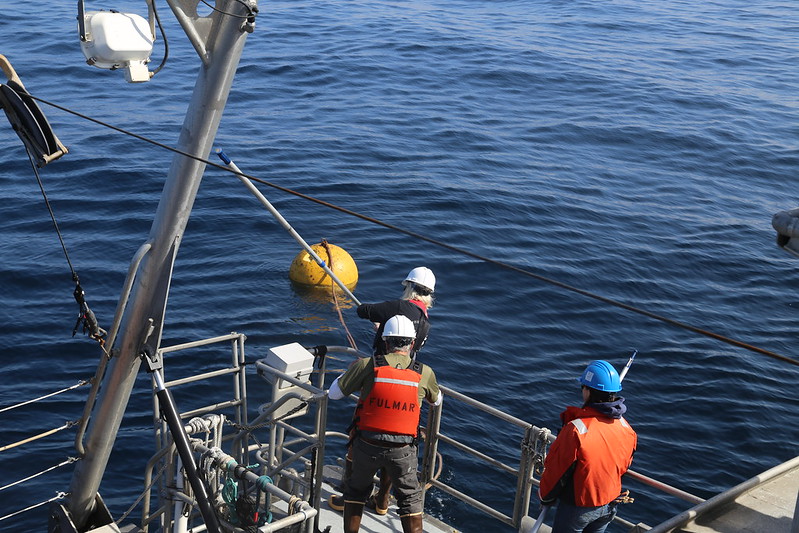 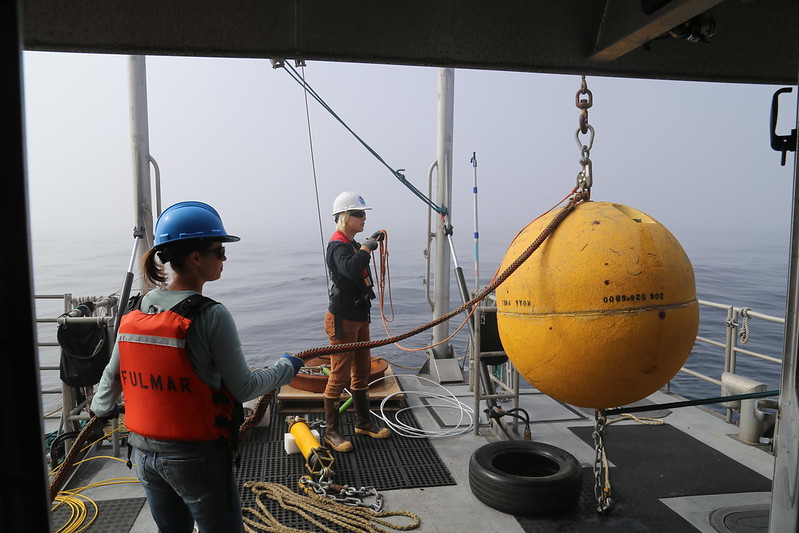