A view from above and below: Hatchery chinook salmon are self-sorting in tanks

CORVALLIS, Ore. – Hatchery-raised chinook salmon sort themselves into surface- and bottom-oriented groups in their rearing tanks. This behavior might be due in part to the fish’s genes, according to an Oregon State University study.

The finding, published in the journal Environmental Biology of Fishes, could change a commonly held view that hatchery-raised fish are generally expected to behave in the same manner, said Julia Unrein, who led the study as a master’s degree student in the Oregon Cooperative Fish and Wildlife Research Unit in OSU’s College of Agricultural Sciences.

“What we found is hatchery juvenile chinook salmon are not made from the same mold,” Unrein said. “Perhaps by trying to force them to fit our model of what a ‘hatchery fish’ is and constrain them to specific release times, we may be overlooking the variation among individuals that we know is important for the survival of their wild counterparts.”

Carl Schreck, professor in OSU’s Department of Fisheries and Wildlife, said, “The implications relative to Endangered Species Act-listed fish may be profound if they serve to allow the creation of test fish for researchers to use when studying how to successfully get juvenile chinook to safely migrate through Willamette system reservoirs and dams. There are fish culture and habitat restoration implications, as well.”

The researchers first recognized this vertical self-sorting behavior, just as the young fish have used up their yolk and are feeding for the first time, at OSU’s Fish Performance and Genetics Laboratory. They observed that some chinook orient themselves near the surface and the remainder swam along the bottom of the tank.

When the researchers separated the surface- and bottom-fish into different tanks, the fish maintained their preferred vertical distribution for at least a year, Unrein said. The fish that fed at the surface continued to stay near the top and the ones that preferred the bottom remained deeper in the tank, even with the surface fish no longer competing for food that was provided at the surface.

They compared body size between the two groups two months after the first feeding began and then six months later. While initially the same size, by the end of the experiment the surface fish were significantly larger than the bottom fish, Unrein said.

“There were also consistent body shape differences, detected after two months of rearing and again six months later,” she said. “The surface fish had a deeper, shorter head and deeper body than the bottom fish, which was more streamlined. For the next four brood years, we looked at these variations and found they were consistent from year to year. For the fourth brood year, we held families separate to determine if the proportion of the two types of fish varied among families and they did, which suggests genetics plays a role.”

Unrein’s research was directed by Schreck and David Noakes, professor and senior scientist in the Oregon Hatchery Research Center in the Department of Fisheries and Wildlife.

“It is surprising that such behavioral sorting hadn’t been noticed before given that we’ve seen it at two different facilities, in different stocks of chinook salmon, and over numerous years,” Schreck said. “It is also present, although not as obvious, in steelhead trout.”

The study resulted from observations made during research funded by the U.S. Army Corps of Engineers, Portland District; the U.S. Geological Survey, the Oregon Department of Fish and Wildlife and the Oregon Hatchery Research Center. 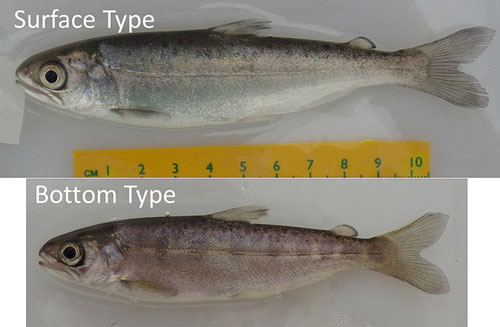