CORVALLIS, Ore. – The number of trout in a southern Oregon stream system showed no decline one year after a fire burned almost the entire watershed, including riparian zone trees that had helped maintain optimal stream temperatures for the cold-water fish.

The research by Oregon State University sheds light on the ability of steelhead, cutthroat and rainbow trout to endure the higher water temperatures expected to accompany climate change and its manifestations, including increased frequency, extent and severity of wildfires.

“It’s crucial that we improve our understanding of the factors that influence how fish respond to postfire changes in stream temperature,” said the study’s leader, Dana Warren, a researcher in the OSU colleges of Forestry and Agricultural Sciences. “The loss of streamside cover during a fire can lead to substantial increases in stream temperature, but the effects of changes to stream thermal regimes on salmonid fishes can be complicated. The fish in this system proved to be quite resilient to these increased temperatures – at least within the range that we saw here.”

The scientists stress that their findings, which showed an increase in fish numbers in their study areas over the summer, do not indicate that wildfires pose no threat to trout populations. In the study, there did not appear to be an immediate impact during peak water temperatures in summer – which regularly got as high as 24 degrees Celsius – but the researchers did not, for example, assess either long-term or less-than-lethal implications of water temperature increases.

“Acute mortality is important but isn’t the only impact,” Warren said. “There may be sublethal effects, like a weakened ability to grow or reproduce. Given the short-term nature of our observations, more research is needed on the mechanisms that drive fish responses to warmer water temperatures, and long-term monitoring is also needed.”

“The fire burned an area for which we have all this historical data on stream flow, water temperature, sediment, nutrients and fish,” said study co-author Kevin Bladon, a hydrologist in the College of Forestry. “Going back there and measuring the same parameters provides some really robust insight into the effects of wildfire.”

Established in the early 2000s, the Hinkle Creek study was set up to see how the Oregon Forest Practices Act and modern logging systems protect forest streams during harvest operations, looking at the effects of logging across entire watersheds.

For this study Bladon, Warren and collaborators at Oregon State looked at the native salmonids, cutthroat trout and steelhead/rainbow trout (steelhead are ocean-going, like salmon).

“These are ecologically, culturally and economically important species distributed across western North America,” Warren said. “Recent studies have speculated about the potential effects of climate change on trout and salmon as summer stream temperatures gradually rise above 16 to 20 degrees Celsius. Abrupt disturbances like fire can produce rapid and substantial increases in stream temperatures that provide insights not only into how these increasingly common disturbance events affect native salmonids, but more broadly how salmonids may respond to other aspects of climate change.”

“And there were two extended periods, 10 days and six days, where stream temperatures never dropped below 16 degrees,” Bladon said.

Contrary to what the scientists had expected, throughout summer 2021 fish abundances did not decline – in fact, they actually increased in the areas where fish numbers were tracked both early and late in the summer.

The persistence of trout in a stream system with elevated temperatures following a fire is not unprecedented, the researchers note. But most of the studies with those types of findings are from regions generally warmer and with greater fire frequency than the western Cascades.

“Although temperatures increased beyond what’s considered the salmonids’ optimal threshold in the Cascades, there were no classically warm-warm species present, so competition from them was not an issue,” Warren said. “A combination of other factors could also have contributed to the persistence of salmonids: high abundance of cooler microhabitats created by groundwater discharge; physiological recovery at night when temperatures were cooler; and an increase in food availability. More investigation is needed to know for sure.”

The National Council for Air and Stream Improvement, the Oregon Forest Industries Council, Roseburg Forest Products and the OSU Fish and Wildlife Habitat in Managed Forests program supported this research. 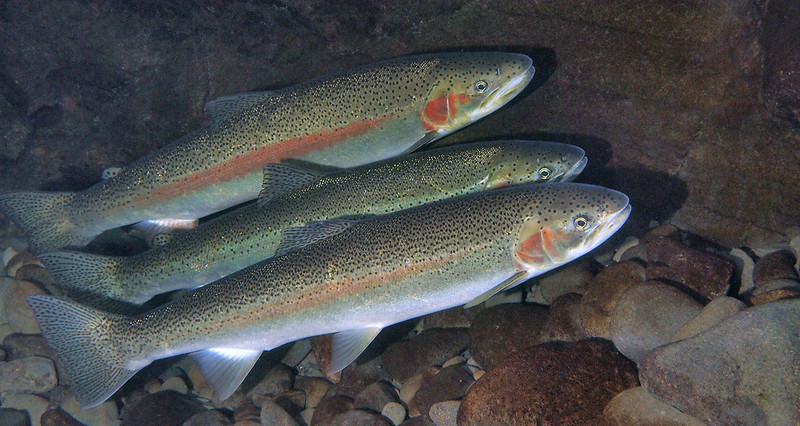