The study is published in the Journal of Nutrition.

A significant next step in this research would be a human clinical trial, said study co-author Neil Shay, professor of food science in OSU’s College of Agricultural Sciences.

In the study, 10-week-old male laboratory mice were fed either a low-fat or high-fat diet over a 10-week period. Groups of high-fat-fed mice were given watermelon supplements in the form of a powder made from a freeze-dried process. The amount of water melon flesh supplement was equivalent to 1½  human servings a day, and the skin and rind supplement were equivalent to the amount in a typical dietary fiber supplement.

At the beginning and end of the trial, the researchers recorded the body weight and glucose tolerance of each mouse. Mice that were fed a high-fat diet supplemented with watermelon products had significantly better blood glucose levels than the mice on the high-fat-only diet.

An elevated blood-glucose level may be an indicator of Type 2 diabetes, a disease in which the body doesn't make enough or properly use insulin, a hormone that turns food into energy. Type 2 is the most common form of diabetes in the United States.

The researchers also saw a significant increase in the family of beneficial bacteria in the mice that were given powder supplements, Shay said.

“Even though the two groups of mice were eating the same amount of fat and sugar, that consumption of 1½ servings of watermelon flesh or 2% of high-fiber rind or skin products had significant effects,” Shay said.

The study was funded by the National Watermelon Promotion Board, an industry group that is seeking new ways to use byproducts such as skin and rind that end up as food waste.

Worldwide production of watermelon topped 117 million metric tons in 2016. In Oregon, watermelon is a multimillion industry in the lower Umatilla basin near Hermiston. Despite all that fruit, there hasn’t been much research into the health impacts of watermelon, said Shay, who studies the compounds of fruits and vegetables and their influence on heart disease and diabetes.

This is the latest OSU study led by Shay that revealed health benefits of certain foods in laboratory mice. One study showed that walnuts helped improve metabolism and another showed that raspberries curbed weight gain even when they were fed a high-fat diet. 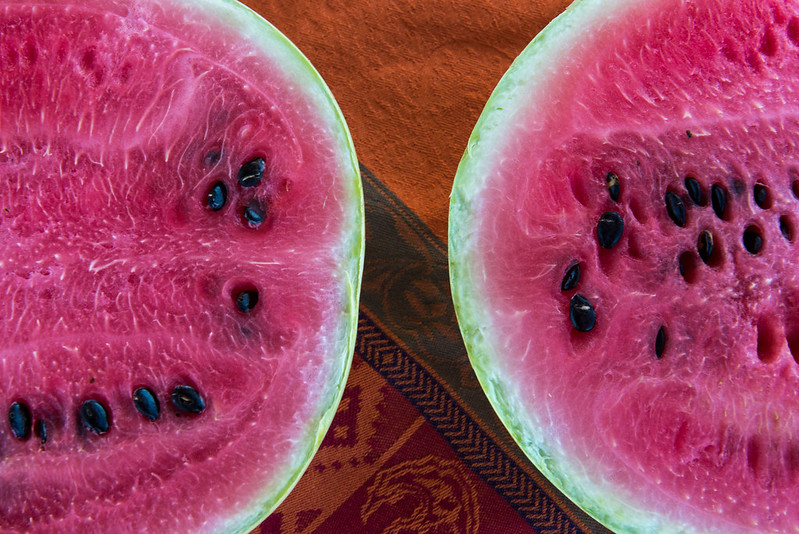