CORVALLIS, Ore. – West Coast forest landowners are expected to adapt to climate change by gradually switching from Douglas-fir to other types of trees such as hardwoods and ponderosa pine, according to a new Oregon State University study.

The study, the first to estimate an economic model of forest-planting choices by landowners as a function of climate, is published in the Journal of the Association of Environmental and Resource Economists.

Natural science analyses of forests and climate find evidence that Douglas-fir will be less productive in the Pacific Northwest under a warming climate, but those analyses haven’t considered how landowners will respond, said David Lewis, an economist in OSU’s College of Agricultural Sciences and co-author on the study.

Lewis co-authored the study with lead author Yukiko Hashida, a 2017 Ph.D. graduate from OSU who is now an assistant professor at the University of Georgia. “Our finding is based on evidence of forest planting choices along the West Coast,” Lewis said. “The overall share of the forest landscape comprised of Douglas-fir will change gradually since only a small fraction of land is harvested every year.”

About half of all non-federal forestland that is harvested in Oregon and Washington is currently replanted with Douglas-fir by landowners. But Douglas-fir will be less productive in the warming climate. The tree’s ability to sequester carbon will diminish and landowners are more likely to switch to other trees, Lewis said.

Modeling by Hashida and Lewis suggests that share of Douglas-fir planting by landowners will shrink to 25% by the end of the century as landowners adapt their management to the projected warming climate.

The study also finds that a carbon pricing policy that subsidizes forest landowners for sequestering carbon will accelerate the transition out of Douglas-fir. The carbon price rewards the climate-induced relative shift in productivity away from Douglas-fir and to hardwoods and ponderosa pine.

Adding a policy that pays landowners to sequester and store carbon in forests will shrink the share of harvested land planted in Douglas-fir even further, to about 15%, he said.

Current policy examples of carbon sequestration in forests include the use of carbon offsets in California’s cap-and-trade program for carbon, which was a model for Oregon’s proposed program that failed to pass in the recently completed legislative session. The U.S. Conference of Mayors recently passed a resolution calling on Congress to pass a federal carbon pricing bill.

There will be trade-offs resulting from transitions out of Douglas-fir to other trees, Lewis said.

The study was funded by the U.S. Forest Service Pacific Northwest Research Station and the U.S. Department of Agriculture National Institute for Food and Agriculture. 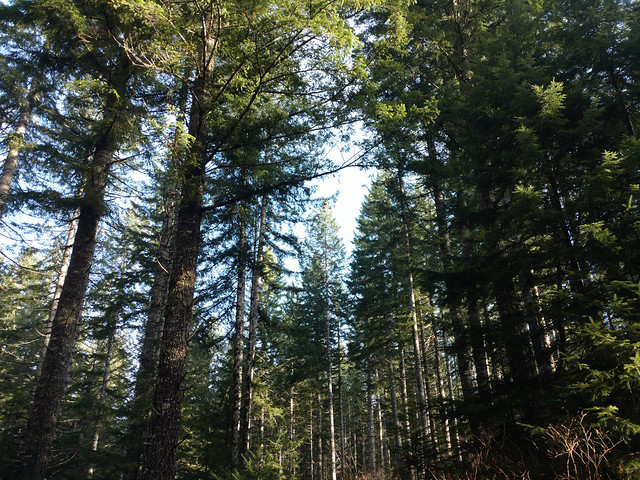