Join us as we take a look back at the Top 10 stories of 2022. From the announcement of a new OSU president to a world record-breaking robot and a project to revitalize Reser Stadium, we've had a year of progress, collaboration and success. 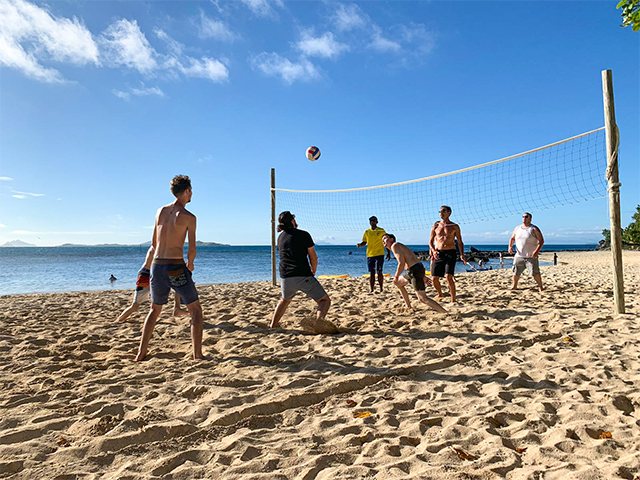 Research by the Oregon State University College of Pharmacy suggests that a vaccine stimulating production of a protein critical to the skin’s antioxidant network could help people bolster their defenses against skin cancer.

Arup Indra, professor of pharmaceutical sciences at OSU and the study’s leader, explained that ultraviolet radiation from the sun leads to oxidative stress, which increases the risk of skin cancers such as melanoma.

Skin cancer is the most common cancer in the United States. Melanoma, the most lethal type of skin cancer, is a form in which malignant cells form in skin cells known as melanocytes; melanocytes produce the pigment melanin, which determines skin color.

A messenger RNA vaccine, like the Moderna and Pfizer vaccines for COVID-19, that promoted production of the protein, TR1, in skin cells could mitigate the risk of UV-induced cancers and other skin problems, he said.

Messenger RNA vaccines work by instructing cells to make a particular protein. In the case of the coronavirus vaccines, it’s a harmless piece of the virus’ spike protein, which triggers an immune response; for the proposed melanoma vaccine, it would be TR1. 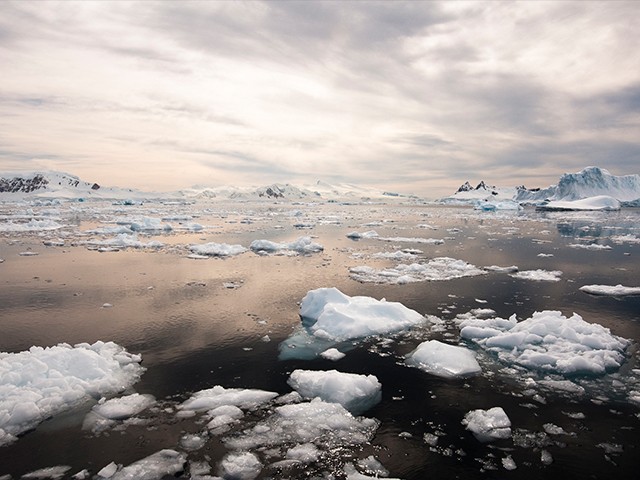 An international coalition of researchers says in a report published in October that the Earth’s vital signs have worsened to the point that “humanity is unequivocally facing a climate emergency.”

The report, “World Scientists’ Warning of a Climate Emergency 2022,” published in the journal BioScience, notes that 16 of 35 planetary vital signs the authors use to track climate change are at record extremes.

They also note large increases in fossil fuel energy consumption following COVID-19 pandemic shutdowns – despite an upswing in commitments for fossil fuel divestment – and a rise in atmospheric carbon dioxide levels to 418 parts per million, the highest on record.

Ongoing work to spur climate change action by scientists around the world is chronicled in a new 35-minute documentary film “The Scientist’s Warning.” The film, by Oregon State Productions, is now available for free online viewing following its Oct. 14 premiere at the Newport Beach Film Festival in Newport Beach, California. 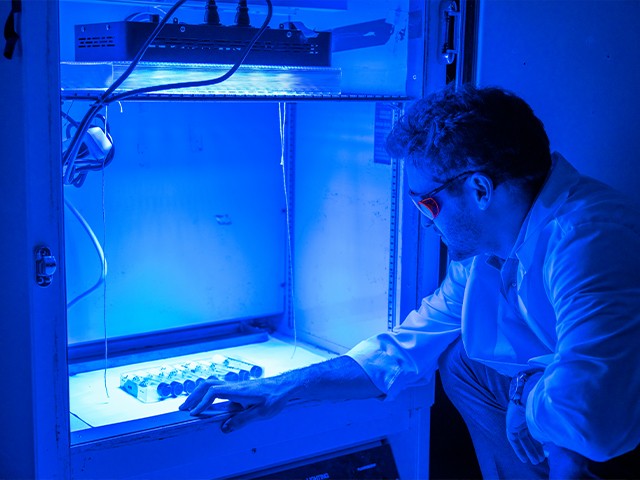 The damaging effects of daily, lifelong exposure to the blue light emanating from phones, computers and household fixtures worsen as a person ages, new research by Oregon State University suggests.

The study, published in July in Nature Partner Journals Aging, involved Drosophila melanogaster, the common fruit fly, an important model organism because of the cellular and developmental mechanisms it shares with other animals and humans.

Jaga Giebultowicz, a researcher in the OSU College of Science who studies biological clocks, led a collaboration that examined the survival rate of flies kept in darkness and then moved at progressively older ages to an environment of constant blue light from LEDs.

The darkness-to-light transitions occurred at the ages of two, 20, 40 and 60 days, and the study involved blue light’s effect on the mitochondria of the flies’ cells.

“Chronic exposure to blue light can impair energy-producing pathways even in cells that are not specialized in sensing light,” Giebultowicz said. “We determined that specific reactions in mitochondria were dramatically reduced by blue light, while other reactions were decreased by age independent of blue light. You can think of it as blue light exposure adding insult to injury in aging flies.” 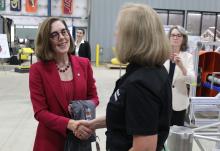 The visit was organized by OSU and the Pacific Marine Energy Center, a consortium of universities including Oregon State that is focused on advancing marine renewable energy. During the 80-minute visit to the wave lab, the secretary, senators and governor mingled with graduate students who provided presentations on their research. The leaders also discussed the future of green energy with OSU faculty from the colleges of Engineering and Earth, Ocean, and Atmospheric Sciences. 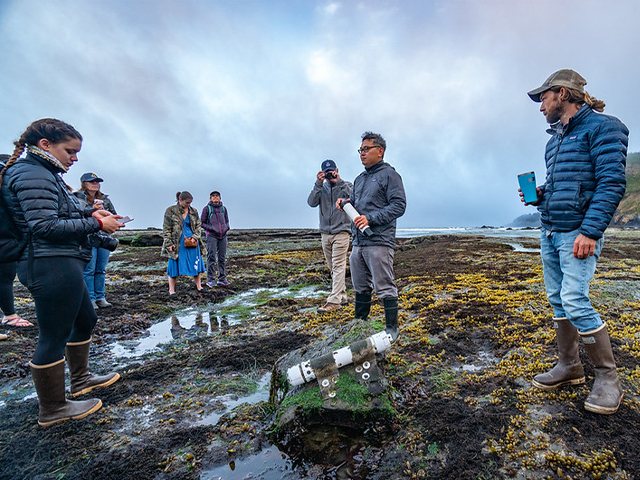 Research funding at Oregon State University increased by greater than 22% in the last fiscal year to more than $471 million, a university record.

In all, OSU research funding rose by $87.6 million, and fiscal year 2022 marks the fourth time in six years that OSU’s research awards have exceeded $400 million. The total includes governmental awards for research; revenue from business and industry for testing, licensing and other partnerships; and land grant funding provided by state and federal agencies.

The contributions of OSU research extend worldwide and include strengthening the early childhood education work force, transdisciplinary studies tackling the consequences of a rapidly changing ocean, and combating disease through the creation of novel proteins.

The total funding of $471.5 million for fiscal year 2022, which ended June 30, is the highest in OSU history by nearly $22 million, eclipsing the previous record of $449.4 million set in 2020. OSU-Cascades research funding topped $5.7 million, a record for the Bend campus. Meanwhile, research expenditures by OSU grew for the 18th time in the last 20 years.

Hemp compounds identified by Oregon State research via a chemical screening technique invented at OSU show the ability to prevent the virus that causes COVID-19 from entering human cells.

Findings of the study led by Richard van Breemen, a researcher with Oregon State’s Global Hemp Innovation Center, College of Pharmacy and Linus Pauling Institute, were published in the Journal of Natural Products. Van Breemen and collaborators found that a pair of cannabinoid acids bind to the SARS-CoV-2 spike protein, blocking a critical step in the process the virus uses to infect people.

The compounds are CBGA and CBDA, and the spike protein is the same drug target used in COVID-19 vaccines and antibody therapy. The acids abundant in hemp and many hemp extracts, and don’t contain THC. 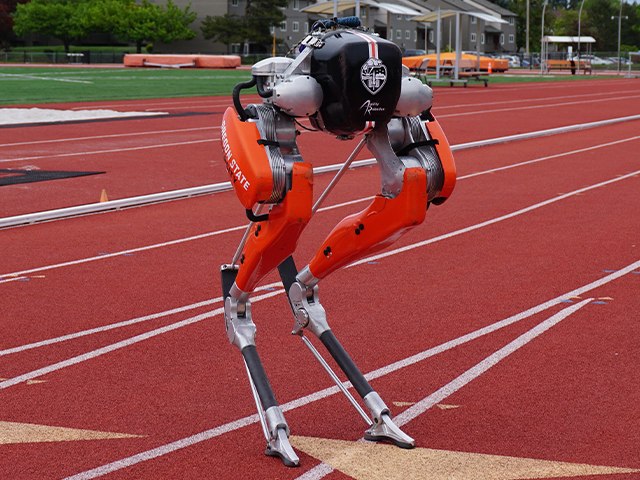 Cassie the robot, invented at the Oregon State University College of Engineering and produced by OSU spinout company Agility Robotics, established a Guinness World Record for the fastest 100 meters by a bipedal robot.

Cassie clocked the historic time of 24.73 seconds at OSU’s Whyte Track and Field Center in September, starting from a standing position and returning to that position after the sprint, with no falls.

The 100-meter record builds on earlier achievements by the robot, including traversing 5 kilometers in 2021 in just over 53 minutes. Cassie, the first bipedal robot to use machine learning to control a running gait on outdoor terrain, completed the 5K on Oregon State’s campus untethered and on a single battery charge.

Cassie was developed under the direction of Oregon State robotics professor Jonathan Hurst with a 16-month, $1 million grant from the Defense Advanced Research Projects Agency.

The robot has knees that bend like an ostrich’s and operates with no cameras or external sensors, essentially as if blind.

Starting and stopping in a standing position are more difficult than the running part, similar to how taking off and landing are harder than actually flying a plane. The 100-meter result was achieved by a deep collaboration between mechanical hardware design and advanced artificial intelligence for the control of that hardware. 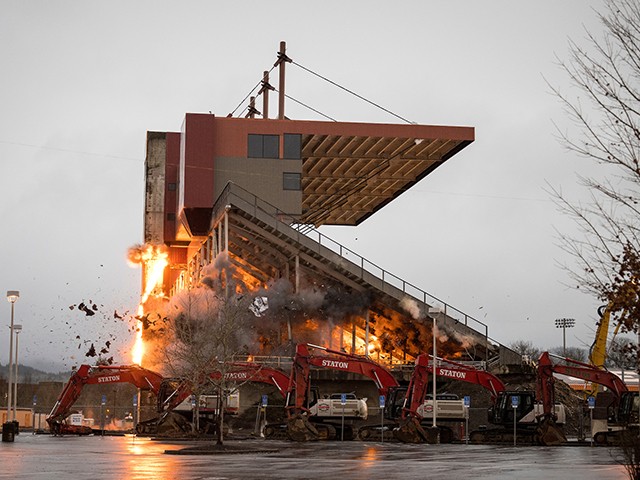 Kicking off the new year, OSU invited the public to watch a livestream of the implosion of the west side of Reser Stadium, as part of a $153 million project to complete the stadium. The updates include a new west side of the stadium, a welcome center for prospective new students and their families and a wellness clinic for students, OSU employees and community members.

It’s expected to be completed before the start of the 2023 football season. The project is being funded by more than $85 million in philanthropy raised by the OSU Foundation and by revenues from football stadium activities. Various revenue sources will fund the wellness center, and new revenues from enrollment growth will fund the student welcome center.

In October, OSU received $100 million in gifts to launch a $200 million research and education center that will harness one of the nation’s most powerful supercomputers and team-based research in artificial intelligence, materials science and robotics to solve global challenges in areas such as climate science, oceanography, sustainability and water resources.

The center will be named the Jen-Hsun and Lori Huang Collaborative Innovation Complex following a gift of $50 million to the OSU Foundation from Jen-Hsun Huang, founder and CEO of NVIDIA, and his wife Lori, both of whom are Oregon State University graduates. The center will serve as a university-wide promise and as a hub for advancing groundbreaking solutions for the betterment of humanity, the environment and the economy.

The three-story, 150,000 square-foot center is being designed and is anticipated to open in 2025. It will be built in the northwest corner of OSU’s Corvallis campus along Southwest Memorial Place and Monroe Avenue, near the intersection with Monroe and Southwest 23rd Street. Murthy had served as the Ronald and Valerie Sugar Dean at the UCLA Henry Samueli School of Engineering and Applied Science since January 2016 and previously worked at several other top engineering universities and in the private sector. She succeeded Becky Johnson, who had served as OSU’s interim president since May 1, 2021.

Murthy praised OSU for its growing national and global research prominence and its contributions to Oregon communities statewide through OSU Extension and engagement programs. She said OSU can grow faculty research, scholarship, creativity and innovation by continuing to hire and retain excellent faculty.