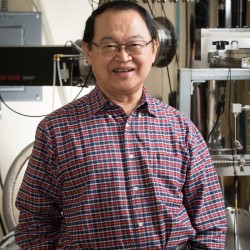 Sang Choi, who earned his Ph.D. in mechanical engineering at OSU, has been inducted into the NASA Technology Transfer Program’s Inventors Hall of Fame.

Choi has worked at NASA’s Langley Research Center for nearly 40 years and has received 71 awards from the agency. He has published more than 200 papers and reports and holds 43 patents.

He has two master’s degrees from Oregon State also, in mechanical engineering and mathematics.