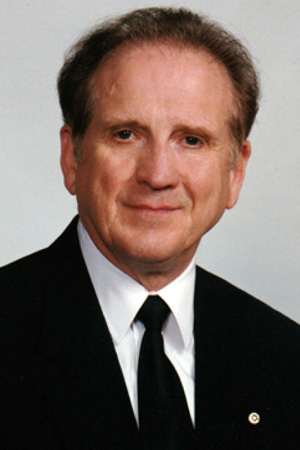 James Douglass, who served as Oregon State University’s Director of Bands from 1968 – 1999, has passed away. During his time at Oregon State, he directed the OSU Symphonic Band and the OSU Marching Band, as well as other athletic bands. He appeared as an adjudicator, guest conductor, band clinician, and trumpet soloist at colleges and high schools in Europe, Canada, Taiwan, the Philippines, and the U.S.

Douglass conducted or produced more than 140 football half-time shows in Corvallis and at numerous away games. Highlights include the Marching Band’s performances in 1973 and 1978 at Oakland Raiders games, and at the Mirage Bowl in Tokyo, Japan.

Douglass also organized and led several international performance and good will tours by the OSU Symphonic Band to Taiwan and Costa Rica.

"JD," as he was affectionately known by many, touched countless lives as an educator, father figure, and musician. He was the founder of the Northwest Band Camp, which served 450 middle school students each summer. The camp was a musical turning point for generations of band kids. Over the years, many former participants of the NW Band Camp have become music educators themselves.

A Celebration of Life will likely be held at a future date.