Bloom where you're planted 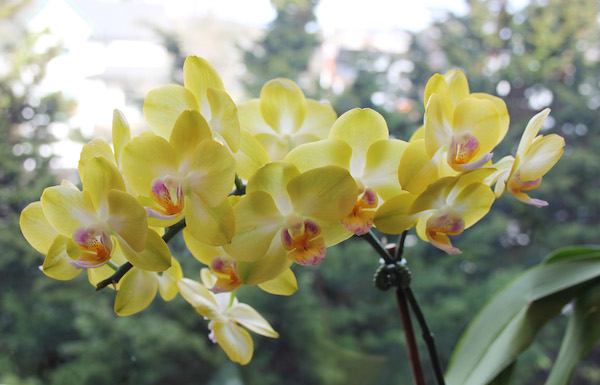 Vivid pinks and yellows glow on the windowsill of Cathy McBride’s office, and the air is filled with a soft fragrance. When she was a little girl in Hawaii, McBride’s favorite chore was getting to spray the orchids in the family’s lathhouse.  Now, she keeps them at work to brighten her space and give her something other than budgets to talk about with her co-workers at Oregon Sea Grant.

“It’s a common interest that fosters camaraderie,” she said. McBride, an administrative program specialist, is one of a number of employees on the third floor of University Plaza who share an interest in plants, especially orchids, succulents and other tropical plants.

McBride used to grow her orchids at home, but when she saw Sam Chan’s blooming office, she decided to bring a few in to her own space. She discovered that the orchids did even better in the office, which she attributes to the large windows, and the fact that at night the office is dark, giving the orchids a decent amount of rest and quiet, which they seem to enjoy.

As for care, McBride says she’s pretty hands off, and it’s paying off. One of her orchids has been blooming for three months straight.

“You don’t mess with them,” she said. Just watch for rot, make sure they’re getting light but not getting baked in the sun, and transplant when necessary.  “I do it by instinct.” And she keeps adding more.

“I want to try different ones and see how they bloom.” 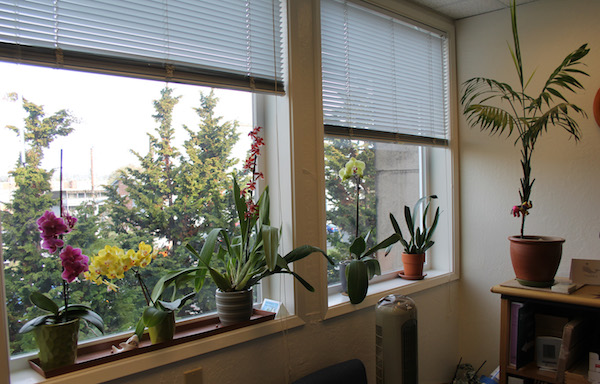 They add a little magic, which can be very comforting at work.

“It brings a little relief to the same old space, and a kind of wonder. You think, ‘How does it do that?’ These are living beings that are okay living with you in this environment.”

Down the hall, Sea Grant communications manager Tiffany Woods has a west-facing window that has several orchids, one of them in full bloom. She wouldn’t call herself a plant expert, more of a novice.

“I tried to kill it,” Woods said with a laugh. “I wasn't watering it often enough.”

In the past, Woods was more of a “Buy fake orchids at T.J. Maxx” kind of plant owner. But luckily, she was able to enlist the help of orchid enthusiasts and fellow Sea Grant employees Chan and Adriene Koett-Cronn.

“They taught me how to be a good orchid mom,” Woods said. Like how to carefully water the plant over the sink and let the water drain, not puddle. And how to repot them when necessary, and stake them strategically. Koett-Cronn recently led an orchid repotting workshop in the lunchroom (which also sports its own banana plant). 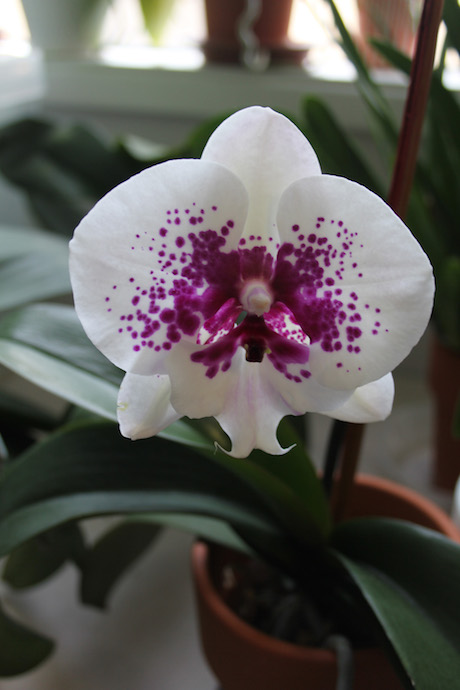 Chan’s office is packed full of orchids in various states of flowering, some of them he’s had for years. When one doesn’t do well in his window, he pops it down the hall to McBride’s office. She has three huge north-facing windows and a section just for ailing plants.

Sea Grant shares the third floor with the Agricultural Research Foundation, but they share something more too, a love of interesting and sometimes exotic plants. Office Manager Charlene Wilkinson has a veritable jungle around her, and carefully tends to each plant. When the office relocated from Strand Agricultural Hall, they brought two plants with them, a rubber tree and a small cactus. But in their new space, the 14 windows and functioning air conditioning made the perfect environment for growing indoor plants.

One of her most successful endeavors came from an item she spotted on Pinterest, which explained how to grow a pineapple tree from a cutting. She started the plant at home and when it started growing she brought it into the office. Five years later, an actual pineapple formed, and everyone on the floor started charting its progress.

Eventually the pineapple, which was smaller than Wilkinson’s hand, ripened, so they held a mini pineapple party, where everything they served was miniature, even mini virgin piña coladas, and everyone got to try a piece of the mini pineapple. Now they’re just waiting for the next bloom. 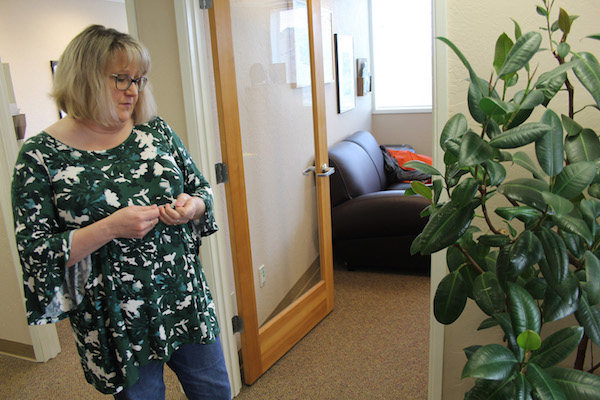 “People come in here to talk about money,” Wilkinson said. “The plants make it very welcoming and homey. We don’t want them to be stressed out. We try to make it relaxing.”

It’s also a great conversation starter. Whenever the rubber tree needs a ‘hair cut,’ as Wilkinson calls it, she takes the trimmed pieces and makes cuttings, filling “buckets and jars and containers” and anything else she can find, and rooting them in the south facing window bank before handing them off to co-workers, visitors, anyone who walks in.

“I always ask, ‘Do you need a plant?’ There’s always something growing,” Wilkinson said. “The water delivery guy even has a plant from us. Department heads have taken plants home. It’s been a fun topic of conversation, a real relationship builder.” 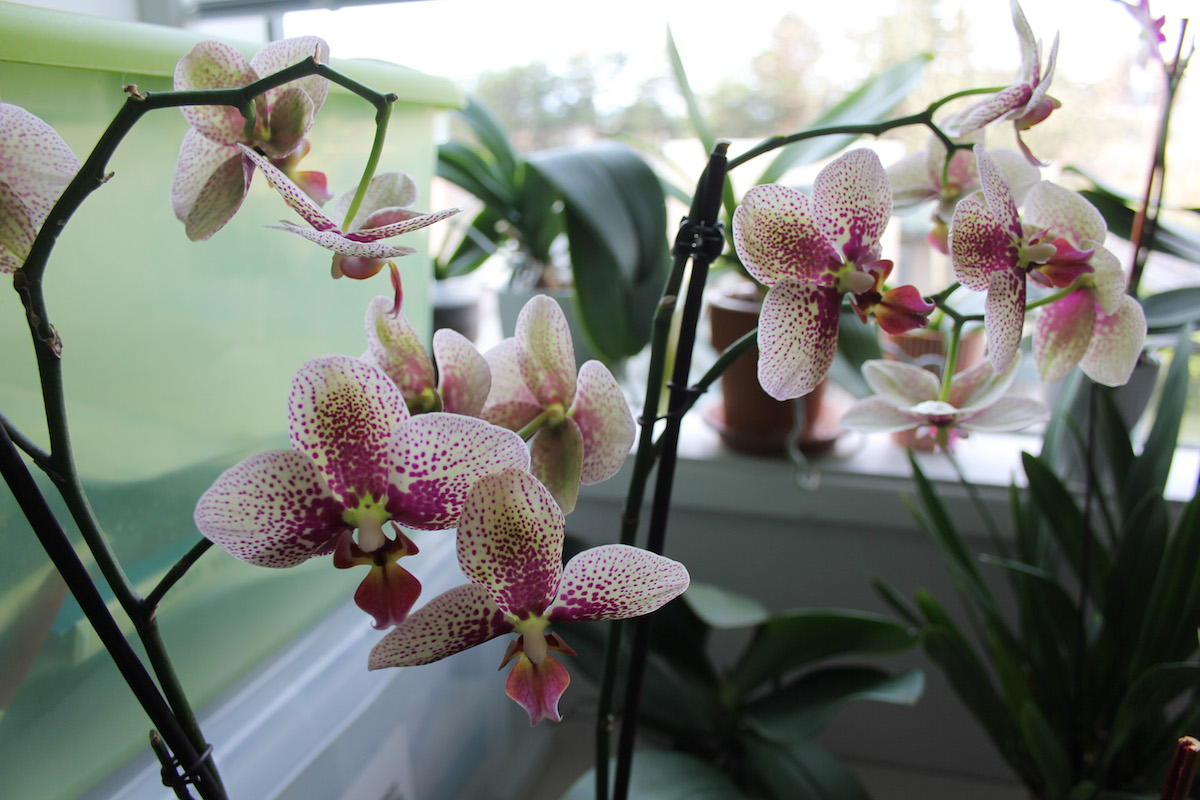