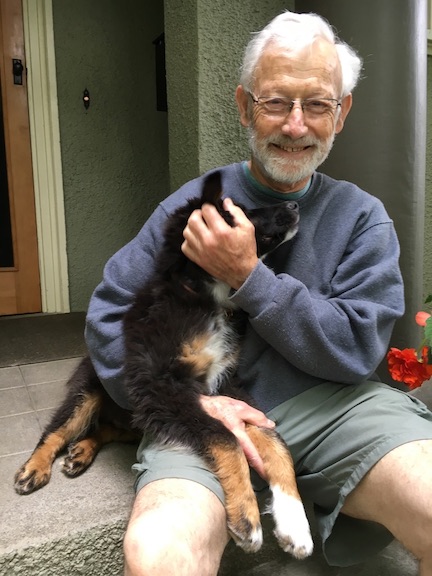 Professor Emeritus Shaul Levi with the College of Earth, Ocean and Atmospheric Sciences died Dec. 6, shortly after his diagnosis of leukemia. He was attended by his wife Catherine and his son Boaz when he passed.

Levi was born on May 10, 1942, in Haifa, Israel, to his two German-Jewish parents, Heinz Otto Levi and Eleonor Levi. Heinz and Eleonor were refugees from Nazi Germany, fleeing just before deportations to the concentrations camps began. Levi grew up in Nahariya, on the shores of the Mediterranean, where he excelled in soccer and academics. When not in school, he was playing soccer or working delivering laundry to the hospital. In his spare time, he dove and body-surfed in the sea. His life changed substantially when he moved with his family to the United States where they could make a better life. The Levi family landed in New York City on Oct. 18, 1957, when Levi was 15 years old. After a short stay in New York, the Levi family moved to San Francisco, where Levi’s father found work as a plumber.

Levi graduated from Washington High School in 1960 and earned a soccer scholarship to University of San Francisco where he played for the USF Dons.  He graduated with a degree in physics from USF then attended UC Davis where he met Catherine Brown, whom he described as “the best thing that ever happened to me.” They moved to Seattle, Washington where he briefly worked for Boeing and then attended the University of Washington and earned a Ph.D in geophysics, specifically paleomagnetism.

Levi and Catherine were married in Seattle on June 21, 1968. In 1971, they had their first two children, twins Aaron and Ethan Levi, born 15 minutes apart. In 1973, the young family moved to Minnesota, where Levi did post-doctoral research at the University of Minnesota. In 1976 they had their third son, Boaz.

In 1977, the Levi family moved to Corvallis where Levi was hired as an assistant professor professor at Oregon State University in the College of Oceanography.  Levi loved Corvallis and enjoyed working at the University. Hel also found a niche coaching youth soccer, first with his son Boaz, then coaching the boys soccer team Philomath High School. At Philomath he made strong bonds with his players, some of whom kept in touch with him until he passed. During his coaching career at Philomath High School, he earned coach of the year awards several years in a row.

In 1998 the Levis met Simon Bequillard, a 15 year old boy who came to live with them from France and attend high school in the United States. Although his biological parents live in France and Simon is as close to them as any other son, Levi and Catherine became his parents in the United States. Levi loved Simon as his son and Simon will always be considered Levi’s adopted son and the fourth brother.

In 2002, Levi retired from the university and he and Catherine moved to Portland, Oregon to be nearer to their sons and their families. They also purchased a cabin on a piece of forested acreage on the Columbia River Gorge. Levi immediately became a student of the land, learning the craft and trade of a woodsman. He engaged in good forest practices, cleared brush, and planted a wide variety of deciduous and evergreen trees, including giant redwoods.

He is survived wife Catherine, and three sons Aaron, Boaz and Ethan and their respective wives Elise Laurel Randles Levi, Sonja Rochelle Gerard and Elizabeth McLaren Levi, as well as his six grandchildren Alexander, Beatrix, Harriet, Irma, Otis, and Rose and his “adopted” son Simon. His younger sister Irit pre-deceased him in 2014.