Many employees find the CFD's payroll contribution method easiest and most satisfying because a small amount taken out of each check adds up to a substantial gift over the course of a year (beginning in January 2020). The fund drive has an online pledging system that is secure, paperless and simple to use. The giving site has already been populated with employee names and OSU ID number. Donations can also be made via check or credit card.

The drive benefits the nonprofits in many ways. For one, they can process a single check from the Fund Drive, rather than numerous checks from individual contributors, which keeps administrative costs low. It also helps nonprofits to budget ahead, as they know early in the year what their revenue from fund drive pledges will be.

The wide variety of nonprofits to choose from means that OSU employees can focus on causes that are near and dear to their hearts. Those local organizations have a visible impact on the community. One of those 700 organizations is the Center Against Rape and Domestic Violence in Corvallis.

College of Engineering Dean's office manager Janet Knudson has volunteered at CARDV since early 2006. Sometimes Knudson wonders if her sister Jill would still be alive today had she known about CARDV or a similar sanctuary. Jill, one of Knudson’s three older sisters, was 46 when her husband killed her in September 2005.

“You never think something like this will happen to you or anyone you know,” Knudson said. “Maybe if she’d asked for help or known that there was a safe place to go rather than staying in her house, events would have been different.”

When 2006 rolled in, Knudson felt compelled to act, and called CARDV.

“I told the director at the time that I wanted to do something — that I didn’t want this to happen to anyone else.” 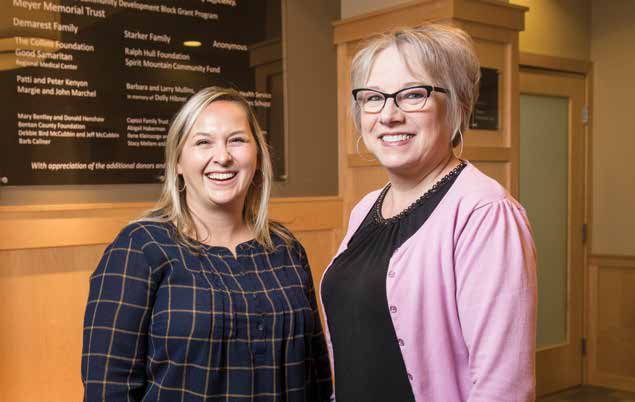 CARDV was established in 1981 when Corvallis Women Against Rape merged with the Linn-Benton Association for the Prevention of Domestic Violence. A headline from the organization’s brochure powerfully sums up its ideals: Everyone deserves to be safe. CARDV’s services include a 24-hour crisis hotline, two emergency safe houses with 16 beds and three cribs between them, emergency response, in-person advocacy, support groups, and education. With its professional staff of nearly 30 and more than 200 volunteers, CARDV serves about 7,000 people each year. Its most recent annual budget exceeded $1.25 million, and a quarter of that came through fundraising. That’s where Knudson has really made her mark: Many thousands of dollars have been raised through the events she’s planned and managed over the past 14 years.

For Knudson, CARDV has been a perfect fit — a place to focus her energy and work in the background to stop domestic violence from destroying families. Her first assignment was to recruit volunteers for the annual 5K fun run. The following year, she became the event’s volunteer coordinator.

The to-do list was long: Get permits to close roads and re-route traffic; enlist volunteers to set up and take down signs, banners, and course markers; find more volunteers to guide and encourage more than 500 runners; recruit still more to haul in and hand out water at the halfway point; and much more. One year, Knudson recruited players from the Oregon State University women’s basketball team. Another time, the men’s soccer team stepped up, and they’ve returned every year since. Benny the Beaver has made some appearances, and the Corvallis police chief and other high-profile local figures have emceed the event.

“There are so many moving parts at these events, and almost everything is done by volunteers,” Knudson said.

Knudson soon became co-chair of the fun run, and, after a few more years, moved on to manage the annual spaghetti dinner.

“I like to mix things up,” she said. “I like variation and I believe events should change and evolve so they don’t get stale and boring.”

There’s not much chance of that happening, according to Letetia Wilson, CARDV’s executive director.

“Janet brings an enormous amount of energy and personal commitment to CARDV. She has an ability to develop lasting, meaningful connections with the community, which are invaluable,” Wilson said. “We rely on volunteers to do so much, especially for our events. All of those generous people are a big reason why we’ve been so successful.”

Before CARDV, Knudson had already logged a long track record of volunteering. She worked with June’s Kids Kloset in Philomath to provide clothing, diapers, and other necessities to families in need; served countless meals to hungry people at Stone Soup in Corvallis; and devoted many hours to the children’s ministry at her church. At CARDV, though, Knudson learned that she had a natural talent and affinity for planning and running big events.

“I really love that part of the work, and now I even do it for friends and family,” she said. “I’ve probably catered a dozen weddings, baby showers, funerals, and church events.”

She’s also learned something much darker: The prevalence of sexual and domestic violence is far greater than most people realize.

“It’s often hidden,” Knudson said. “Many victims deny there’s a problem or put a good face on things. Women may convince themselves that the situation will change. If someone has gotten to the point where they start thinking ‘Oh, you know, I don’t think this is abuse,’ then something’s wrong and they need to get help. Just knowing that there are people out there who care and who they can talk to is a huge deal, which is why it’s so important to make everyone aware of CARDV and other places they can turn to.”

For more information on participating in the Charitable Fund Drive to support CARDVA or the other worthy 700 organizations, go to https://leadership.oregonstate.edu/charitable-fund-drive

~ written by Steve Frandzel courtesy of the College of Engineering, with contributions from Theresa Hogue. Photo by Karl Maasdam.