Coming to terms with being the Daughter of Neptune 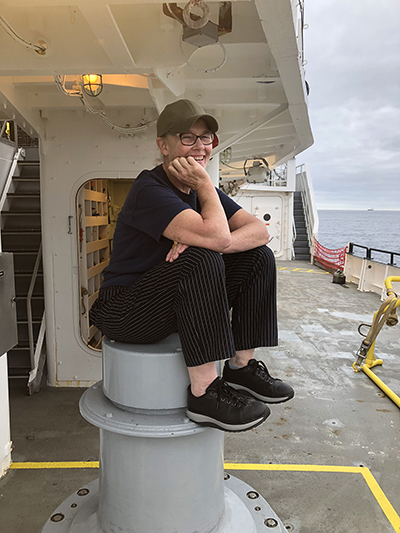 During the day, Theresa Wisner works in the galley of the Oregon State research vessel Oceanus, where she cooks three meals a day for more than two dozen people. A US Merchant Mariner by training, Wisner comes from a long line of sea-faring folk. Her father and brothers are all fishermen, and as a young woman, Wisner found herself traveling to the far reaches of the Earth to prove herself to her family. Those far-flung adventures culminated in Wisner’s new memoir, “Daughter of Neptune,” which will be released March 14.

Wisner was born in Long Island and used to fish off Montauk Point and Freeport with her father.

“I can’t remember the first time I went on the water, but it would have been before I was 9. My family fished for sport then. My father was an executive with a national truck and trailer corporation. He would travel around the world to fish,” she said. “When we moved to Oregon, my older brothers went to work on fishing vessels. Because of the pride I saw in my dad for them, I thought it was the way to his heart, so when I was asked to go fishing on a tuna boat, I accepted.”

Her career started in the fishing industry when she worked on salmon and tuna trollers off the Pacific Coast, eventually working as a cook on the big trawlers. Her adventures took her to the Aleutian Islands, the Antarctic Ocean, and even aboard a replica of Sir Francis Drake’s flagship the Golden Hinde.

In “Daughter of Neptune” Wisner explores the driving desire to please her father, a drive that pushed her into the male-dominated fishing industry and propelled her to the extreme reaches of the sea. The book tackles addiction and recovery, tough family dynamics and what it takes to grow up.

“Writing this memoir has been like shedding the final vestiges of my heavily spotted past,” Wisner said. “I have always needed to write, and it seemed I had to get this story out in a form that made sense of my life and my relationship to my father. I had to find the character arc in the story to truly come to terms with who I was, and who I am.”

As a young woman in the male-dominated fishing industry, Wisner took cues from her experience as the little sister in the family, and learned to stand her ground.

“It seemed I tried to insert myself into the lives of my older brothers since I was able to walk,” she said. “I followed them everywhere and was mostly shooed away. What I learned was to be persistent and work hard, and to stay invisible until my worth was acknowledged.”

In the beginning, Wisner was the only woman she knew in the industry. Sometimes she’d encounter other women in her job, but they were usually wives accompanying their husbands, or the occasional sex worker, but no women fishers. Times have definitely changed, although slowly.

“Today, I work on a ship where the chief engineer is a woman, a mate is a woman, and the scientific parties are typically composed of more women than men,” she said. “Still, there are few women in the fishing industry, but that is changing.”

Wisner did take a long break away from fishing, and for years worked as a non-profit director and in the wave energy industry. But during a particularly stressful point in her career, a former colleague invited her to work on a research vessel, and she jumped at the opportunity.

“I haven’t looked back, except with gratitude that I’m no longer in a stressful occupation. Although there is stress with my job, it is short term. As the director of non-profits, the stress only built.”

Part of Wisner’s memoir deals with addiction, and she said she wants readers to see hope in the struggle.

“I hope people who are struggling with addiction or alcoholism might see a way out,” she said, “and that the people who may love an alcoholic find hope in the healing message I attempt to impart.”

Thanks in part to the positive experience of writing her memoir, Wisner is now working on a novel. She also plans to keep working on the research vessel and is excited to help bring the newest vessel, Ta’ani, online.

Daughter of Neptune can be pre-purchased at https://www.amazon.com/Daughter-Neptune-found-at-sea-ebook/dp/B07NQ59Y6K.  It will be released March 14, and Wisner hopes to have it in local bookstores soon.