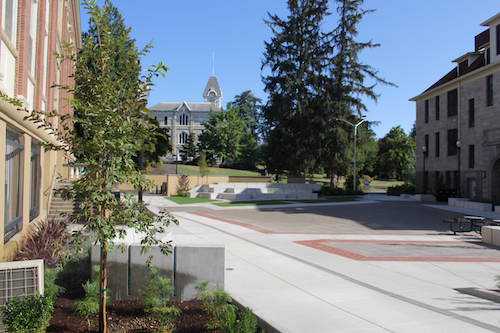 Moving around Furman Hall, the Pharmacy building and Gladys Valley Gymnastics Center is now much easier, thanks to the completion of phase one of the Community Hall Slope project on the Corvallis campus. The work, which began in summer 2021, has revitalized and opened up the area between the corner of 15th Street and Jefferson Avenue to the Valley Library, with an emphasis on disability access,  pedestrian ease, and creating a more welcoming entrance to campus.

From broad, curved pathways to the removal of external staircases, to the creation of seating areas and outdoor classroom space, the area around Furman and College of Pharmacy has been  transformed. While a small amount of parking spots remain, most of the area now consists of a courtyard style space with cement seats, plantings and even texture changes on the stone and concrete that help those with visual impairments navigate the space. Every change has been done with an eye toward ease of navigation and access to buildings, said Director of Access and Affirmative Action Gabriel Merrell during a recent tour of the project.

“Improving the accessibility of this space has been a top priority for 10 years,” Merrell said. “This was a holistically designed project, not just pathways but beautification, lighting, creating a space that was welcoming to everyone. Previously there was no accessible way to the library quad from here. Now people can move around easily.” 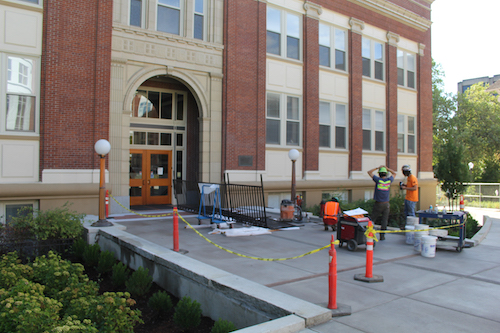 Some of the changes have been done in preparation for more extensive internal building changes. For example, the flight of stone stairs on the west side of the Pharmacy building have been removed and a flat path put in its place so that wheelchair users can now access that entrance. However there are stairs immediately inside the building which blocks further access, but the work has been done with the idea that eventually the inside will also be remodeled to provide access.

The work also ties in with areas that are yet to be updated but which are set for a later phase of the project. Those include a major accessibility upgrade around The Hattie Redmond Women and Gender Center and Community Hall, and another project around Kerr Administration Building.

The work is being done on part of the original 35 acres of land acquired for the campus in 1871 as part of the original Land Grant acquisition. The goal was to fit the new details into the historic fabric of the space, while also looking forward to the next 150 years. It is also a keystone project in OSU’S Comprehensive Accessibility Plan for the built environment.

“This has been a passion project for many of us,” Merrell said. “We have a long way to go, but this is a massive part of that vision.” 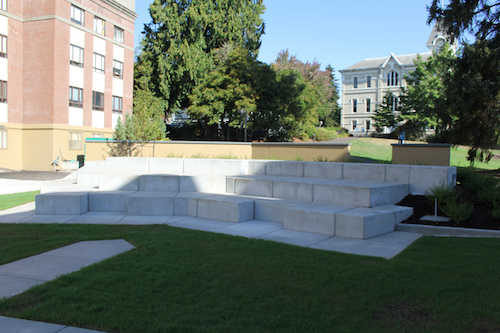